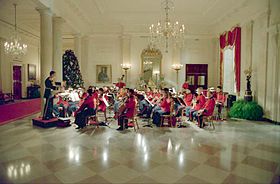 The United States Marine Band performing in the White House Entrance Hall during an official visit by Prime Minister of the United Kingdom, Margaret Thatcher in 1988.

There are many military bands in the United States military. Some are assigned to specific military bases or units. There are also bands associated with each of the service academies.

Other bands in all services are staffed with members who have enlisted in the relevant service, then passed an audition to attend one of the armed forces' music schools. Unlike the premier bands, these members are rotated among a services' bands serving at various installations. These bands may provide support at their designated installations, but also frequently deploy to combat zones to provide support for the troops stationed there. 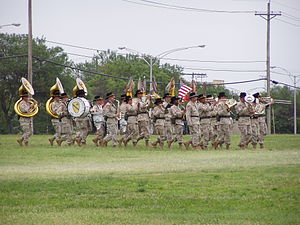 In addition, there are seventeen US Army Reserve Bands and fifty-one Army National Guard Bands stationed in the continental United States. In total, there are approximately 5,000 Army soldiers serving in approximately 100 US Army Bands worldwide. 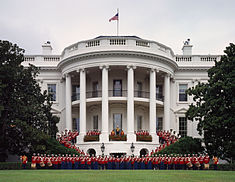 Established in 1798 by an act of Congress, the U.S. Marine Band "The President's Own" is the oldest professional musical organization in the U.S. It is well known for its public performances (about 500 per year across the U.S.) and performances at the White House and Inauguration Day festivities. The U.S. Marine Band includes the Marine Band proper as well as the Marine Chamber Orchestra, and Marine Chamber Ensembles. John Philip Sousa led the band from 1880 to 1892. The U.S. Marine Band was headquartered at Marine Barracks Washington at 8th Street, SE and I Street, SE in Washington, D.C. until September 2004, when it moved to the new Marine Barracks Annex and Marine Band Support Facility, located at 7th Street SE and Virginia Avenue SE.

Officially designated in 1925, the United States Navy Band is composed of 172 enlisted musicians and four officers. The organization is composed of a six performing ensembles: the Concert Band, the Ceremonial Band, the Sea Chanters chorus, the Commodores jazz ensemble, Country Current country-bluegrass ensemble, and the Cruisers contemporary entertainment ensemble. The band also has several chamber music groups. The U.S. Navy Band is based at the Washington Navy Yard in Washington, DC. Captain Brian O. Walden is the current commanding officer. 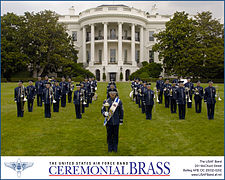 Air Force bands organize, train and deploy professional Airman musicians, harnessing the power of music to inspire immediate, positive, and long-lasting impressions of the United States Air Force and the United States of America in the hearts and minds of audiences worldwide.

Forty years later, President Lyndon B. Johnson signed the Congressional legislation that resulted in the U.S. Coast Guard Band becoming the permanent, official musical representative of the nation's oldest continuous seagoing service, the U.S. Coast Guard. This event established the band as one of the ten premier service bands in the U.S.

The duties of the U.S. Coast Guard Band have greatly expanded since 1965. Originally a small command band located at the Academy and used primarily for local purposes, today the band routinely tours throughout the U.S. and has performed in the former Soviet Union as well as in England. The band represents the U.S. Coast Guard around the nation and the world, at presidential functions, and for the Secretary of Homeland Security and other cabinet officials on formal and informal occasions.