From Infogalactic: the planetary knowledge core
Jump to: navigation, search
File:Global US military presence in 2007.png
2013 deployments of the US military
Grey = None or no data available
Orange = <100 troops (Including Military attaché's)
Red = 100-1000 troops
Black = 1000+ troops

The military of the United States is deployed in more than 150 countries around the world, with over 150,000 of its active-duty personnel serving outside the United States and its territories and an additional 71,000 deployed in various contingency operations as well as through military attache offices and temporary training assignments in foreign countries. US troops are spread across the globe: over 65,000 are stationed in Europe; approximately 78,000 in East Asia and the Pacific region; over 5,000 in North Africa, Southwestern and South Asia; nearly 1,600 in the Americas; less than 400 in Sub-Saharan Africa; and less than 100 in states of the former Soviet Union.[1] Of those in Europe, most of the military personnel are located at installations activated during the Cold War, by which the US government sought to challenge the Soviet Union in the aftermath of World War II.[2]

US personnel are seeing active combat in Afghanistan. Others are deployed as part of several peacekeeping missions, military attachés, or are part of embassy and consulate security.

The following are countries, listed by region, in which US military personnel are deployed. The numbers are based on the most recent United States Department of Defense statistics as of June 30, 2015.[1] These numbers do not include any military or civilian contractors or dependents. Countries with fewer than 100 US personnel deployed are omitted. 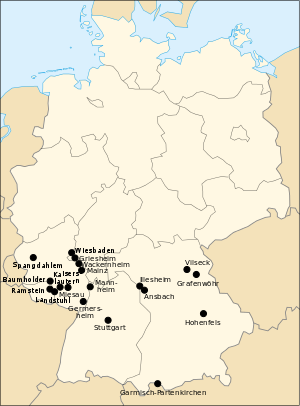 US military bases in Germany in 2009

There are 1,145,093[1] personnel on active duty in the United States and its territories including five Air Force personnel on Wake Island and one Navy personnel in the U.S. Virgin Islands: