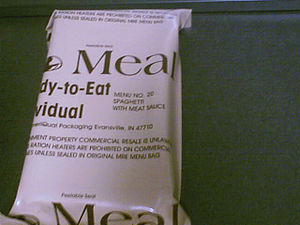 The United States military ration refers to various preparations and packages of food provided to feed members of the armed forces. U.S. military rations are often made for quick distribution, preparation, and eating in the field and tend to have long storage times in adverse conditions due to being thickly packaged and/or shelf-stable. The current ration is the Meal, Ready-to-Eat (MRE).

Main article: History of military nutrition in the United States 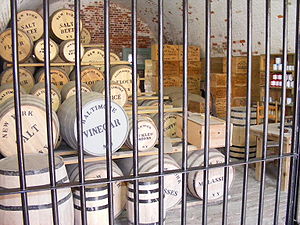 From the Revolutionary War to the Spanish–American War, the United States army ration, as decreed by the Continental Congress, was the garrison ration which consisted of meat or salt fish, bread or hardtack, and vegetables.

There was also a spirit ration. In 1785, it was set at 4 oz. of rum, reduced to 2 oz. of whiskey, brandy, or rum in 1790. In 1794, troops about to enter combat or who were engaged in frontier service could receive a double ration of 4 oz. of rum or whiskey; this was extended in 1799 to include troops engaged in fatigue duties. It was discontinued in 1832 and replaced with a ration of coffee and sugar, which was increased in 1836. In 1846, a spirit ration was reinstated for issue to troops engaged in construction or surveying duties; this was discontinued in 1865.

During the American Civil War, both armies struggled to keep their soldiers adequetely fed. Difficulties with food logistics led to a multitude of rations.

In World War I three types of rations came into usage by the American forces: the Reserve ration, the Trench ration, and the Emergency ration (also known as the Iron ration).

The first attempt to make an individual ration for issue to soldiers in the field was the "iron ration", first introduced in 1907. It consisted of three 3-ounce cakes (made from a concoction of beef bouillon powder and parched and cooked wheat), three 1-ounce bars of sweetened chocolate, and packets of salt and pepper that was issued in a sealed tin packet that weighed one pound. It was designed for emergency use when the troops were unable to be supplied with food. It was later discontinued by the adoption of the "Reserve Ration" but its findings went into the development of the emergency D-ration.

This ration was issued in the early part of the war to address a problem. Soldiers fighting in the front lines needed to be supplied with their daily rations, but cooked food prepared at field kitchens was sometimes spoiled by gas attacks. The trench ration was the answer. It was a variety of canned meats (salmon, corned beef, sardines, etc.) that were commercially procured and sealed in a large tin box covered in canvas. It was bulky and heavy and the soldiers began to get weary of the limited menu and it was soon replaced by the Reserve Ration.

The reserve ration was first issued during the latter part of World War I to feed troops who were away from a garrison or field kitchen. It originally consisted of 12 ounces of fresh bacon or one pound of canned meat known as the Meat Ration - usually, corned beef. Additionally, two 8-ounce cans of hard bread or hardtack biscuits, a packet of 1.16 ounces of pre-ground coffee, a packet of 2.4 ounces of granulated sugar, and a packet of 0.16 ounces of salt were issued. There was also a separate "tobacco ration" of 0.4 ounces of tobacco and 10 cigarette rolling papers, later replaced by brand-name machine-rolled cigarettes.

After the war, there were attempts to improve the ration based on input from the field. In 1922, the Meat Ration was revised, consisting of one pound of meat (usually a combination of dried beef and canned corned beef). This was supplemented by hard chocolate, 14 ounces of hard bread or hardtack biscuits, coffee, and sugar. In 1925, the Meat Ration was changed, deleting the dried beef in favor of canned pork and beans, and reducing the bread component. The corned beef allowance was also reduced in size (older rations continued to be issued, however). In 1936, menu planners attempted to introduce more variety by developing an alternate Meat Ration consisting of an "A"-menu (canned corned beef) and a "B"-menu (canned pork & beans). The A & B Reserve or combat ration was canceled after being superseded in 1938 by the Field Ration, Type C.

After 1918, the army ration system went through several revisions, eventually leading to the:

A-rations were generally whatever meat and produce could be obtained locally, so there could be great variety from one theatre of operations to the next. B-rations were generally used when there was inadequate refrigeration for perishable A-rations. The composition of the D-ration did not change much throughout the war but the C-ration developed many variations. 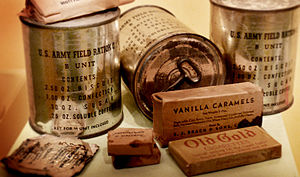 A- and B-rations were only served at bases or established camps in rear areas as they require cooking. C-rations could be eaten hot or cold and required no special preparation or storage, so these could be served almost anywhere.

During the war a new ration for assault troops, the 2,830 calories (11,800 kJ) K-ration, was developed. K-rations were originally intended to be used as short duration rations for only 2–3 days, but cost concerns and later standardization led to its overuse,[1] contributing in some cases to vitamin deficiencies and malnourishment.[1]

There were various other special rations developed for specific circumstances, including:

Some of these specialized rations were discontinued during the war due to cost concerns, forcing commanders to adopt standardized rations in their place. The K- and D-rations were declared obsolete after World War II but canned wet rations in the form of the C-ration (later the MCI) continued until 1983, when they were replaced by the Meal, Ready-to-Eat (MRE). 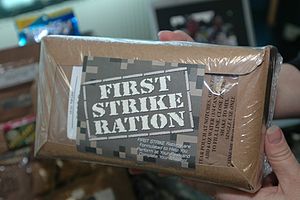 Currently, the following food is available to troops: