In 1839, the Whigs held a national convention for the first time. The 1839 Whig National Convention saw 1836 nominee William Henry Harrison defeat former Secretary of State Henry Clay and General Winfield Scott. Van Buren faced little opposition at the 1840 Democratic National Convention, but controversial Vice President Richard Mentor Johnson was not re-nominated. The Democrats thus became the only major party since the passage of the Twelfth Amendment to fail to select a vice presidential nominee.

Referencing vice presidential nominee John Tyler and Harrison's participation in the Battle of Tippecanoe, the Whigs campaigned on the slogan of "Tippecanoe and Tyler Too." With Van Buren weakened by economic woes, Harrison won a popular majority and 234 of 294 electoral votes. Voter participation surged as white male suffrage became nearly universal,[2] and a contemporary record of 42.4% of the voting age population voted for Harrison.[1] Van Buren's loss made him the third president, and the first outside the Adams family, to lose re-election.

The Whigs did not enjoy the benefits of victory. The 67-year-old Harrison, the oldest U.S. president elected until Ronald Reagan won the 1980 presidential election, died a little more than a month after inauguration. Harrison was succeeded by John Tyler, who unexpectedly proved not to be a Whig. While Tyler had been a staunch supporter of Clay at the convention, he was a former Democrat, a passionate supporter of states' rights, and effectively an independent. As President, Tyler blocked the Whigs' legislative agenda and was expelled from the Whig Party, subsequently the second independent (after Washington) to serve as president.

Three years after Democrat Martin Van Buren was elected President in the election of 1836 over three Whig candidates, the Whigs met in national convention determined to unite behind a single candidate. The convention was chaired by Isaac C. Bates of Massachusetts and James Barbour of Virginia presided over the convention. The party nominated the popular retired general William Henry Harrison of Ohio for president, the most successful of the three Whig presidential candidates from the previous election. Harrison won a close victory on the convention's fifth ballot against party founder Henry Clay and General Winfield Scott. Harrison, though a slave-owner and aristocrat, was perceived as being simple and a commoner.[3] The convention nominated former Senator John Tyler from Virginia for vice president. The two would go on to win the 1840 presidential election by defeating Van Buren.

Because Harrison (born in Virginia) was considered a Northerner (as a resident of Ohio), the Whigs needed to balance the ticket with a Southerner. They also sought a Clay supporter to help unite the party after Clay's loss on the balloting. Tyler was finally chosen by the convention after several Southern Clay supporters had been approached but refused. Tyler had previously been the running-mate of Hugh Lawson White and Willie Person Mangum during the four-way Whig campaign at the previous election.

Van Buren, the incumbent president, was re-nominated in Baltimore in May 1840.

While the Democratic Party refused to re-nominate the incumbent vice-president, Richard M. Johnson, they were unable to agree on an alternative running mate at the convention, and adjourned without having nominated one. As of 2020, this is the only time since the passage of the 12th Amendment in 1804 that a major party has failed to do so.

This is also one of only two elections (as of 2020) where a major party did not have a vice-presidential candidate on their ticket on Election Day; the other was in 1912, as the incumbent vice-president, James S. Sherman (of the Republican Party), died six days before the election.

In the electoral college, the Democratic vice-presidential votes were divided among Johnson, Littleton W. Tazewell, and James K. Polk.

After the negative views of Freemasonry among a large segment of the public began to wane in the mid 1830s, the Anti-Masonic Party had begun to disintegrate. Its leaders began to move one by one to the Whig party. Party leaders met in September 1837 in Washington, D.C., and agreed to maintain the party. The third Anti-Masonic Party National Convention was held in Philadelphia on November 13–14, 1838. By this time, the party had been almost entirely supplanted by the Whigs. The delegates unanimously voted to nominate William Henry Harrison for president (who the party had supported for president the previous election along with Francis Granger for vice president) and Daniel Webster for vice president. However, when the Whig National Convention nominated Harrison with John Tyler as his running mate, the Anti-Masonic Party did not make an alternate nomination and ceased to function and was fully absorbed into the Whigs by 1840.

The Liberty Party was announced in November 1839, and first gathered in Warsaw, New York. Its first national convention took place in Arcade on April 1, 1840.

The Liberty Party nominated James G. Birney, a Kentuckian, former slaveholder, and prominent abolitionist, for president while Thomas Earle of Pennsylvania was selected as his running mate. 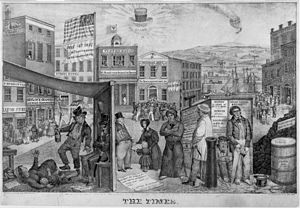 Caricature on the aftermath of the panic of 1837

In the wake of the Panic of 1837, Van Buren was widely unpopular, and Harrison, following Andrew Jackson's strategy, ran as a war hero and man of the people while presenting Van Buren as a wealthy snob living in luxury at the public expense. Although Harrison was comfortably wealthy and well educated, his "log cabin" image caught fire, sweeping all sections of the country.

Harrison avoided campaigning on the issues, with his Whig Party attracting a broad coalition with few common ideals. The Whig strategy overall was to win the election by avoiding discussion of difficult national issues such as slavery or the national bank and concentrate instead on exploiting dissatisfaction over the failed policies of the Van Buren administration with colorful campaigning techniques.

Harrison was the first president to campaign actively for office. He did so with the slogan "Tippecanoe and Tyler too". Tippecanoe referred to Harrison's military victory over a group of Shawnee Native Americans at a river in Indiana called Tippecanoe in 1811. For their part, Democrats laughed at Harrison for being too old for the presidency, and referred to him as "Granny", hinting that he was senile. Said one Democratic newspaper: "Give him a barrel of hard cider, and ... a pension of two thousand [dollars] a year ... and ... he will sit the remainder of his days in his log cabin."

Results by county explicitly indicating the percentage of the winning candidate in each county. Shades of yellow are for Harrison (Whig) and shades of blue are for Van Buren (Democrat).

Whigs took advantage of this quip and declared that Harrison was "the log cabin and hard cider candidate", a man of the common people from the rough-and-tumble West. They depicted Harrison's opponent, President Martin Van Buren, as a wealthy snob who was out of touch with the people. In fact, it was Harrison who came from a family of wealthy planters, while Van Buren's father was a tavernkeeper. Harrison however moved to the frontier and for years lived in a log cabin, while Van Buren had been a well-paid government official.

Nonetheless, the election was held during the worst economic depression in the nation's history, and voters blamed Van Buren, seeing him as unsympathetic to struggling citizens. Harrison campaigned vigorously and won.

Harrison won the support of western settlers and eastern bankers alike. The extent of Van Buren's unpopularity was evident in Harrison's victories in New York, the president's home state, and in Tennessee, where Andrew Jackson himself had come out of retirement to stump for his former vice-president.

Few Americans were surprised when Van Buren lost in the electoral vote by 234 to 60, but many were amazed by the closeness of the popular vote: of 2.41 million votes cast, Van Buren lost by only 146,500, and a shift of 20,000 votes to Van Buren in Michigan, Mississippi, New Jersey, New York and Pennsylvania would have left the electoral college in a 147–147 tie, forcing a contingent election in the House of Representatives.

Given all the circumstances, it is surprising that the Democrats performed as well as they did.[4]

Harrison's victory won him precious little time as chief executive of the United States. After giving the longest inauguration speech in U.S. history (lasting about 1 hour and 45 minutes, in cold weather and rain), Harrison served only one month as president before dying of pneumonia on April 4, 1841. This was also the first election in US history in which a candidate won more than a million popular votes.

(a) The popular vote figures exclude South Carolina where the Electors were chosen by the state legislature rather than by popular vote.

States where the margin of victory was under 1%:

States where the margin of victory was under 5%:

States where the margin of victory was under 10%:

"Tippecanoe and Tyler too"

Rockabye, baby, Daddy's a Whig
When he comes home, hard cider he'll swig
When he has swug
He'll fall in a stu
And down will come Tyler and Tippecanoe.

Rockabye, baby, when you awake
You will discover Tip is a fake.
Far from the battle, war cry and drum
He sits in his cabin a'drinking bad rum.

Rockabye, baby, never you cry
You need not fear of Tip and his Ty.
What they would ruin, Van Buren will fix.
Van's a magician, they are but tricks.

In the film Amistad, Van Buren (played by Nigel Hawthorne) is seen campaigning for re-election. These scenes have been criticized for their historical inaccuracy.[8]