The United States presidential election of 1872 was the 22nd quadrennial presidential election, held on Tuesday, November 5, 1872. The incumbent President Ulysses S. Grant was easily elected to a second term in office, with Senator Henry Wilson of Massachusetts as his running mate, despite a split within the Republican Party that resulted in a defection of many Liberal Republicans to opponent Horace Greeley of the Democratic Party, which also nominated the candidates of the Liberal Republican ticket that year.

On November 29, 1872, after the popular vote, but before the Electoral College cast its votes, Greeley died. As a result, electors previously committed to Greeley voted for four different candidates for president, and eight different candidates for vice-president. Greeley himself received three posthumous electoral votes, but these votes were disallowed by Congress. The election was the first in which every competing state used a popular vote to determine its electors; since 1832, South Carolina had been the lone state to decide electors by the state legislature. Florida's legislature had decided its electors in 1868. The election of 1872 is the only US presidential election in which a candidate has died during the electoral process.

At the 1872 Republican National Convention the Republicans nominated President Ulysses S. Grant for reelection, but nominated Senator Henry Wilson of Massachusetts for Vice President, instead of the incumbent Schuyler Colfax, who was implicated in the Credit Mobilier scandal. Others, who had grown weary of the corruption of the Grant administration, bolted to form the Liberal Republican Party. 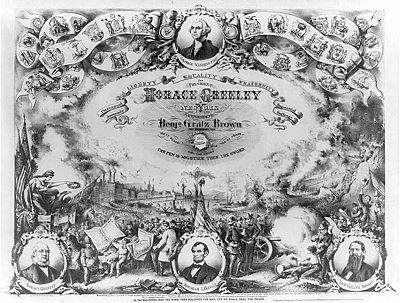 In the hope of defeating Grant, the Democratic party endorsed the nominees of the Liberal Republican Party.

An influential group of dissident Republicans split from the party to form the Liberal Republican Party in 1870. At the party's only national convention, held in Cincinnati in 1872, New York Tribune editor Horace Greeley was nominated for President on the sixth ballot, defeating Charles Francis Adams. Missouri Governor Benjamin Gratz Brown was nominated for vice-president on the second ballot.

The 1872 Democratic National Convention met in Baltimore, Maryland, on July 9–10. Because of its strong desire to defeat Ulysses S. Grant, the Democratic Party also nominated the Liberal Republican's Greeley/Brown ticket[2] and adopted their platform.[3] Greeley received 686 of the 732 delegate votes cast, while Brown received 713. Accepting the Liberal platform meant the Democrats had accepted the New Departure, which rejected the anti-Reconstruction platform of 1868. They realized that to win the election they had to look forward, and not try to re-fight the Civil War.[4] Also, they realized they would only split the anti-Grant vote if they nominated a candidate other than Greeley. However, Greeley's long reputation as the most aggressive antagonist of the Democratic party, its principles, its leadership, and its activists cooled Democrats' enthusiasm for the nominee, and there was a sizable minority led by James A. Bayard which had sought to act independent of the Liberal Republican ticket. The convention, which lasted only six hours stretched over two days, was the shortest major political party convention in history.

The Labor Reform Party had only been organized in 1870, with the first (and only) National Convention meeting in St. Louis Missouri on February 22, 1872. Initially there was a fair amount of discussion as to whether the party should actually nominate anyone for the presidency at that time, or if they should wait at least for the Liberal Republicans to nominate their own ticket first; every motion to that effect lost, and a number of ballots were taken resulting in the nomination of David Davis for the Presidency, who was the frontrunner for the Liberal Republican nomination at that time. Joel Parker, the Governor of New Jersey, was nominated for the Vice Presidency.

While Davis did not decline the nomination of the Labor Reform party, he decided to hinge his campaign in large part on the success of attaining the Liberal Republican nomination so that he might at least have their resources behind them. After their convention, in which he failed to attain the nomination, Davis telegraphed the Labor Reform party and informed them of his intention to withdraw from the presidential contest entirely. Joel Parker soon followed suit.

A second convention was called on August 22 in Philadelphia, where it was decided, rather than making the same mistake again, the Party would cooperate with the now fledgling "Straight-Out Democrat" movement that had recently formed and nominate their candidate as soon as it was known whom. Unfortunately that movement's nominee, Charles O'Conor, declined to run as well. Figuring that it was now too late to nominate a ticket of their own, the Party leadership decided to continue the campaign under O'Conor's name, even if he were not actually running. The various state affiliates grew less and less active, and by the following year the party ceased to be.

The National Woman's Suffrage Association held its annual convention in New York City on May 9, 1872. Some of the delegates had been supporting Victoria Woodhull, who had spent the year since the previous NWSA annual meeting touring the New York City environs and giving speeches on why women should be allowed to vote. A year earlier, she had announced her intention to run. Also in 1871, she spoke publicly against the government being composed only of men; she proposed developing a new constitution and a new government a year thence. Five hundred delegates from 26 states and four territories who had attended the convention met in Apollo's Hall in New York City as the People's (Equal Rights) Party National Convention on May 10.

The delegates selected Victoria Woodhull to run for President, and nominated the former slave and abolitionist leader Frederick Douglass for Vice President. He did not attend the convention and never acknowledged the nomination, though he would serve as a presidential elector in the United States Electoral College for the State of New York.

The Equal Rights Party operated under a serious disadvantage, its prime constituency being unable to vote. At the time, no state specifically allowed women the right to vote.

Woodhull gave a series of speeches around New York City during the campaign. Her finances were very thin, and when she borrowed money from supporters, she often was unable to repay them. As a result, most of the newspaper coverage of her campaign dealt largely with her financial woes. On the day before the election, Woodhull was arrested for "publishing an obscene newspaper" and so was unable to cast a vote for herself.

Victoria Woodhull became the first woman to be nominated for the presidency. However, Woodhull was ineligible to be president on Inauguration Day, not because she was a woman (the Constitution and the law were silent on the issue), but because she would not reach the constitutionally prescribed minimum age of 35 until September 23, 1873. Woodhull and Douglass are not listed in "Election results" below, as the ticket received a negligible percentage of the popular vote and no electoral votes.[5]

Grant's administration and his Radical Republican supporters had been widely accused of corruption, and the Liberal Republicans demanded civil service reform and an end to the Reconstruction process, including withdrawal of federal troops from the South. Both Liberal Republicans and Democrats were disappointed in their candidate Greeley. As wits asked, "Why turn out a knave just to replace him with a fool?"[6] A poor campaigner with little political experience, Greeley's career as a newspaper editor gave his opponents a long history of eccentric public positions to attack. With memories of his victories in the Civil War to run on, Grant was unassailable. Grant also had a large campaign budget to work with. One historian was quoted saying, "Never before was a candidate placed under such great obligation to men of wealth as was Grant." A large portion of Grant's campaign funds came from entrepreneurs, including Jay Cooke, Cornelius Vanderbilt, Alexander Turney Stewart, Henry Hilton, and John Astor.[7]

This was the first election after the formation of the National Woman Suffrage Association and the American Woman Suffrage Association in 1869. As such, protests for women's suffrage became more prevalent. In addition to the afore-mentioned nomination of Victoria Woodhull to the presidency, several suffragettes would attempt to vote in the election. Susan B. Anthony was arrested and fined $100 for attempting to vote. Woodhull herself was in jail on Election Day for indecency.

File:PresidentialCounty1872Colorbrewer.gif Grant won an easy re-election over Greeley by a margin of 56% to 44%. Grant garnered 286 electoral votes to what would have been 66 electoral votes for Greeley—but Greeley died on November 29, 1872, just 24 days after the election and before any of the electors from the states Greeley won (Texas, Missouri, Kentucky, Tennessee, Georgia, and Maryland) could cast their votes. Most of Greeley's electors cast their votes for other Democrats.

Of the 2,171 counties making returns, Grant won in 1,335 while Greeley carried 833. Three counties were split evenly between Grant and Greeley.

During the joint session of Congress for the counting of the electoral vote on February 12, 1873, numerous objections were raised to some of the results. However, unlike the objections which would be made in 1877, these had no impact on the outcome of the election.[8]

This election was the last in which Alabama and Mississippi voted for a Republican until 1964. Arkansas would not be carried by a Republican again until 1972.

(a) The used sources had insufficient data to determine the pairings of 4 electoral votes in Missouri; therefore, the possible tickets are listed with the minimum and maximum possible number of electoral votes each.
(b) Greeley was disqualified, having previously died and thus become ineligible for the Presidency, but the Brown vice-presidential votes were counted.