The United States presidential election of 1908 was the 31st quadrennial presidential election, held on Tuesday, November 3, 1908. Popular incumbent President Theodore Roosevelt, honoring a promise not to seek a third term, persuaded the Republican Party to nominate William Howard Taft, his close friend and Secretary of War, to become his successor. Having lost the 1904 election badly with a conservative candidate, the Democratic Party turned to two-time nominee William Jennings Bryan, who had been defeated in 1896 and 1900 by Republican William McKinley. Despite his two previous defeats, Bryan remained extremely popular among the more liberal and populist elements of the Democratic Party. Despite running a vigorous campaign against the nation's business elite, Bryan suffered the worst loss of his three presidential campaigns. 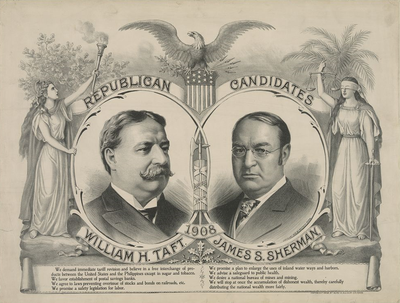 The Republican nomination contest marked the introduction of the presidential preference primary. The idea of the primary to nominate candidates was sponsored by anti-machine politicians such as New York Governor Charles Evans Hughes and Senator Albert B. Cummins. The first state to hold a presidential primary to select delegates to a national convention was Florida in 1904, when Democratic Party voters held a primary among uninstructed candidates for delegate. Early in 1908, the only two Republican contenders running nationwide campaigns for the presidential nomination were Secretary of War William Howard Taft and Governor Joseph B. Foraker, both of Ohio. In the nomination contest, four states held primaries to select national convention delegates. In Ohio, the state Republican Party held a primary on February 11. Candidates pledged to Taft were printed on the ballot in a Taft column, and candidates pledged to Foraker were printed in a column under his name. Taft won a resounding victory in Ohio. The three states holding primaries to select delegates without the preference component were split: California chose a slate of delegates that supported Taft; Wisconsin elected a slate that supported Wisconsin Senator Robert M. La Follette, Sr., and Pennsylvania elected a slate that supported its Senator Philander C. Knox.

The 1908 Democratic Convention was held in Denver between July 7 and 10. Despite a challenge by Minnesota governor John Albert Johnson, William Jennings Bryan quickly won the overwhelming support of his party.

John W. Kern of Indiana was unanimously declared the candidate for vice-president without a formal ballot after the names of Charles A. Towne, Archibald McNeil, and Clark Howell were withdrawn from consideration.

Disappointed with his performance in the 1904 Democratic presidential nomination campaign, and disillusioned as to his chances of successfully attaining it in 1908, William Randolph Hearst decided to run instead on the ticket of a third party of his own making. Originally borne from the Municipal Ownership League, a vehicle for Hearst's ultimately unsuccessful bid for the mayoralty of New York in 1905, it was Hearst's intention to fuse it with the remnants of the Populist Party led by Thomas Watson, a former Congressmen from Georgia who had been its presidential nominee in 1904. However, these intentions were dashed when every candidate that the Independence Party put forth in elections held in New York was elected except Hearst himself, despite an endorsement by the Democratic Party. Devastated, Hearst declared his intention never again to be a candidate.

While Hearst would no longer be the nominee, he fully intended to exercise influence at Independence Party's convention; the platform itself was in large part a statement of his own views. With its candidates nominated, the party's purpose was changed from being a path for Hearst's presidential ambitions to being an instrument of his wrath. Through the influence of his papers and generous financial donations, Hearst hoped that the Independence ticket would draw away votes from William Jennings Bryan and lead to his defeat against Taft, a personal vendetta for Bryan failing to support his own bid for the Presidency in 1904.

Eugene Debs had originally hoped that Bill Haywood, who had attained a national profile from being put on trial for the murder of Frank Steunenberg, of which he was acquitted, would run for the Socialist nomination for president. At this time however the Socialist Party was fracturing between its radical and more moderate elements, and Debs was deemed the only candidate capable of keeping the party unified. He was overwhelmingly nominated for the presidency on the first ballot, with Benjamin Hanford again named as his running-mate.

The aging and balding "Boy Orator of the Platte" delivers a speech.

With the Free Silver issue no longer dominant, Bryan campaigned on a progressive platform attacking "government by privilege." His campaign slogan, "Shall the People Rule?", was featured on numerous posters and campaign memorabilia. However, Taft undercut Bryan's liberal support by accepting some of his reformist ideas, and Roosevelt's progressive policies blurred the distinctions between the parties. Republicans also used the slogan "Vote for Taft now, you can vote for Bryan anytime," a sarcastic reference to Bryan's two failed previous presidential campaigns.

Businessmen continued to support the Republican Party, and Bryan failed to secure the support of labor. As a result, Bryan ended up with the worst of his three defeats in the national popular vote. He lost almost all the northern states to Taft and the popular vote by 8 percentage points.

This would be Bryan's last campaign for the presidency, although he would remain a popular figure within the Democratic Party and in 1912 would play a key role in securing the presidential nomination for Woodrow Wilson. Charles W. Bryan, William's brother, would become the (losing) Democratic nominee for Vice President in 1924.

Results by county explicitly indicating the percentage for the winning candidate. Shades of red are for Taft (Republican), shades of blue are for Bryan (Democratic), and shades of green are for "Other(s)" (Non-Democratic/Non-Republican).[5] 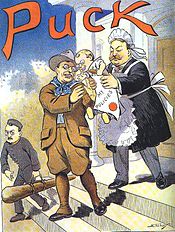 Roosevelt handing over his policies to his political protégé, William H. Taft.

46 states participated, as Oklahoma had joined the Union less than a year before. Bryan won 48 counties in the new state of Oklahoma. The most important increase in number of counties carried by Bryan was in the West South Central section (this was in part due to the vote of newly admitted Oklahoma).[6]

Bryan increased the area carried by Democrats in every part of the country except New England and the South. He doubled the number of Democratic counties in Wisconsin and won more counties in Indiana than were carried by plurality vote by the Democrats in any election in the Fourth Party System except 1912. He made decided gains in Missouri and in Nebraska.[8]

Notable were Bryan's victories in Colorado and Nevada, as well as in his home state of Nebraska. But in four Western states (Washington, Oregon, Wyoming, and North Dakota), there was not a Democratic county. This was true likewise of Michigan, Delaware, and each of the New England states.

The total vote increased greatly, more than a million over that of 1904. Each party shared in the increase, but whereas Taft had nearly 50,000 more than Theodore Roosevelt, Bryan had nearly 1,500,000 more votes than Alton Parker had garnered, and more than in either of his previous campaigns.

It was noticeable that the "other" vote was only about 7,000 less than four years earlier. The "other" vote prevailed in 9 counties in the states of Georgia and Texas.

The size of the vote cast for the defeated Bryan in 1908 is clear evidence of perhaps the most striking feature of the American presidential vote. In this third attempt at the presidency, and in an election following one in which the nominee of his party polled only 5,000,000 votes, Bryan had heavy support in every section of the country, and in every state. Moreover, nearly 2/3 of the vote cast for Bryan was from the 15 states of the (Northeastern) Mid-Atlantic, East North Central, and West North Central sections, in which the Democratic candidate carried only one state (Nebraska).

Despite all conclusions as to predominant sentiment in the different sections and its economic, social, and political causes, there was a national vote cast for Bryan, and it was urban as well as rural; it was eastern, western, southern, and northern. Everywhere the Democratic Party was the minority party, and it was not hopeless, nor was it helpless. It was the agency for the expression of the opposition of almost 6,500,000 voters.[9]

Counties with Highest Percent of Vote (Other)