The United States presidential election of 1932 was the 37th quadrennial presidential election, held on Tuesday, November 8, 1932. The election took place against the backdrop of the Great Depression that had ruined the promises of incumbent President and Republican candidate Herbert Hoover to bring about a new era of prosperity. The Democratic nomination went to the well-known governor of the most populous state, New York's Franklin D. Roosevelt, who had been reelected governor in a landslide in 1930. Roosevelt united all wings of his party, avoided divisive cultural issues, and brought in a leading Southern conservative as his running mate, House Speaker John Nance Garner of Texas.

Roosevelt repeatedly blamed Hoover for the Depression and worsening economy. With unemployment above 20% in 1932 alone, Hoover was remiss to defend his record,[1] and Roosevelt promised recovery with a New Deal for the American people.[2] Roosevelt won by a landslide in both the electoral and popular vote, receiving the highest percentage of the popular vote for a Democratic nominee. The election marked the effective end of the Fourth Party System, dominated by Republicans. Subsequent landslides in the 1934 mid-term elections and following presidential election two and four years later respectively, signified the commencement of the Fifth Party System, dominated by Roosevelt's New Deal Coalition.[3]

As the year 1932 began, the Republican Party believed Hoover's protectionism and aggressive fiscal policies would solve the depression. Whether they were successful or not, President Herbert Hoover controlled the party and had little trouble securing a re-nomination. Little-known former United States Senator Joseph I. France ran against Hoover in the primaries, but Hoover was often unopposed. France's primary wins were tempered by his defeat to Hoover in his home state of Maryland and the fact that few delegates to the national convention were chosen in the primaries.

Hoover's managers at the Republican National Convention, which met in Chicago between June 14 and 16, ran a tight ship, not allowing expressions of concern for the direction of the nation. He was nominated on the first ballot with 98% of the delegate vote.

The tally was spectacularly lopsided:

Both rural Republicans and hard-money Republicans (the latter hoping to nominate former President Calvin Coolidge) balked at the floor managers and voted against the renomination of Vice-President Charles Curtis, who won with just 55% of the delegate votes.

The leading candidate for the Democratic presidential nomination in 1932 was New York Governor Franklin D. Roosevelt. Speaker of the House John Nance Garner and former Governor of New York Al Smith were trailing him. Before the 1932 Democratic National Convention met in Chicago between June 27 and July 2, Roosevelt was believed to have more delegate votes than all of his opponents combined. However, due to the "two-thirds" nominating rule then used by the Democrats, his opponents hoped that he would be unable to obtain the two-thirds majority necessary to win, and that they could gain votes on later ballots or coalesce behind a dark horse candidate.[4]:3–4

On the first three ballots Roosevelt had well over a majority of the delegate vote, but still lacked the two-thirds majority. Before the fourth ballot, his managers James Farley and Louis McHenry Howe struck a deal with House Speaker John Nance Garner: Garner would drop out of the race and support Roosevelt, and in return Roosevelt would agree to name Garner as his running mate. With this agreement, Roosevelt won the two-thirds majority and with it the presidential nomination.[4]

File:Hoover Campaign.jpg
Hoover addresses a large crowd in his 1932 campaign.

After making an airplane trip to the Democratic convention, Roosevelt accepted the nomination in person. In this history-making[clarification needed] speech, Roosevelt promised to "abolish useless offices" and "eliminate unnecessary functions of Government", stating that "Government – Federal and State and local – costs too much", and even promised to help facilitate the "restoration of the trade of the world".[5] Roosevelt's trip to Chicago was the first of several successful, precedent-making moves designed to make him appear to be the candidate of change in the election. Large crowds greeted Roosevelt as he traveled around the nation; his campaign song "Happy Days Are Here Again" became one of the most popular in American political history[4]:244 – and, indeed, the unofficial anthem of the Democratic Party.[6]

Although Roosevelt was not as widely known as Smith had been in 1928, his utterances made him appealing to some of the same elements of the population that had supported Smith four years before. Moreover, the Democrats were united as they had not been in 1928, as Roosevelt's Protestantism was by no means detrimental as Smith's Roman Catholicism had been four years prior. The Democrats were also united closely more so than they had been at any time in the Fourth Party System.[7] Cultural issues that had dominated previous elections, like Catholicism in 1928 and the Ku Klux Klan in 1924, were nearly dormant. Prohibition was a favorite Democratic target, as few Republicans tried to defend it. There was a mounting demand to end prohibition and bring back beer, liquor, and the resulting tax revenues.[8] 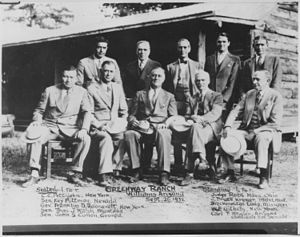 Roosevelt (seated, center) at Greenway Ranch in Williams, Arizona on September 26, 1932. He is accompanied by U.S. Senator from Arizona Carl Hayden standing far right, along with –among others –three Democrats from the U.S. Senate (seated): Pittman, Walsh, and Cohen.

In contrast, Hoover was not supported by many of the more prominent Republicans and violently opposed by others, in particular by a number of senators who had fought him throughout his administration and whose national reputation made their opposition of considerable importance. Many prominent Republicans even went so far as to espouse the cause of the Democratic candidate openly.[9]

Making matters worse for Hoover was the fact that many Americans blamed him for the Great Depression. For more than two years, President Hoover had been restricting trade and increasing taxes on the wealthy with legislation such as the Smoot–Hawley Tariff Act and the Revenue Act of 1932. Roosevelt lashed out at Hoover: "I accuse the present Administration of being the greatest spending Administration in peacetime in all our history."[10] Garner accused Hoover of "leading the country down the path of socialism."[11] The outrage caused by the deaths of veterans in the Bonus Army incident in the summer of 1932, combined with the catastrophic economic effects of Hoover's domestic policies, reduced his chances of a second term from slim to none. His attempts to campaign in public were a disaster, as he often had objects thrown at him or his vehicle as he rode through city streets. In his addresses, Hoover attacked Roosevelt as a capitalist president who would only make the Depression worse by decreasing taxes, reducing government intervention in the economy, promoting "trade [with] the world", and cutting "Government –Federal and State and local".[5] However, with unemployment at 23.6%,[12][13] Hoover's criticisms of Roosevelt's campaign promises did nothing more than further lower his popularity with the public. Roosevelt himself did not have a clear idea of the New Deal at this point, so he promised no specific programs.[14] It was said that "Even a vaguely talented dog-catcher could have been elected president against the Republicans." [15] Hoover even received a letter from an Illinois man that advised, "Vote for Roosevelt and make it unanimous."

The election was held on November 8, 1932. Maine held separate state elections in September.

Results by county explicitly indicating the percentage for the winning candidate. Shades of blue are for Roosevelt (Democratic) and shades of red are for Hoover (Republican).[17]

Although the "other" vote of 1932 was three times that of 1928, it was considerably less than what had been recorded in 1920 (the time of the greatest "other" vote with the exception of the unusual conditions prevailing in 1912 and 1924).

The Democratic candidate won the support of 22,817,883 voters (57.41%), the greatest vote ever cast for a candidate for the Presidency up until that time, and 1,425,000 greater than that cast for Hoover in 1928. It is to be noted that Hoover won a greater percentage of the vote in 1928, as did Harding in 1920. But the national swing of 35.17% impressed all who considered the distribution of the vote, and indicated that more than one-third of the electorate had switched from supporting the Republican Party to the Democratic Party. Only once in this period had there been a comparable shift; in 1920 there was a 29.29% swing towards the Republicans.[9] The swing from Smith in 1928 to Roosevelt in 1932 remains the greatest national swing of the electorate between presidential elections in the history of the United States.

1932 was a realigning election, as Roosevelt and the Democratic ticket won a sweeping victory over Hoover and the Republicans, extending their control over the U.S. House and gaining control of the U.S. Senate. Twelve years of Republican leadership came to an end, and 20 consecutive years of Democratic control of the White House began.[16] Until 1932, the Republicans had controlled the Presidency for 56 of the previous 72 years, dating to Abraham Lincoln's election in 1860. After 1932, the Democrats would control the Presidency for 28 of the next 36 years, until the 1968 election created a new alignment that favored the Republicans, and was cemented in 1980.

Roosevelt led the poll in 2,722 counties, the greatest number ever carried by a candidate for the presidency up until that time. Of these, 282 had never before been Democratic. Only 374 counties remained loyal to the Republican candidate. It is to be noted, however, that 1/2 of the total vote of the nation was cast in just eight states (New York, New Jersey, Pennsylvania, Ohio, Illinois, Indiana, Michigan, Wisconsin), and that in these states Hoover polled 8,592,163 votes. In one section (West South Central) the Republican percentage sank to 16.21%, but in no other section did the party poll less than 30% of the vote cast. But the relative appeal of the two candidates in 1932, and the decline of the appeal of Hoover as compared with 1928, are show in the fact that the Republican vote increased in 1932 in only 87 counties, while the Democratic vote increased in 3,003 counties.

The great vote cast for Hoover, and the fact that in only one section of the nation (West South Central) did he have less than 500,000 votes and in only 3 states outside of the South less than 50,000 votes, make it clear that the nation remained a two-party electorate, and that everywhere, despite the triumph of the Democrats, there was a party membership devoted to neither the new administration nor the proposals of the Socialist candidate who had polled 3/4 of the "other" vote (as well as the highest raw vote total of his campaigns).[18]

The Roosevelt ticket swept every region of the country except New England and carried many reliable Republican states that had not been carried by the Democrats since their electoral landslide of 1912, when the Republican vote was divided. The state of Minnesota was carried by a Democrat for the first time in its history, leaving Vermont as the only remaining state never to be carried by a Democratic candidate (and it would not be until 1964). In contrast to the state’s solid support of Republicans prior to this election, Minnesota has continued supporting Democrats in every presidential election but three since 1932 (The exceptions being 1952, 1956 and 1972).

Roosevelt's victory with 472 electoral votes stood until the 1964 victory of Lyndon B. Johnson, who won 486 electoral votes in 1964, as the most ever won by a first-time contestant in a presidential election. He also bettered the national record 444 electoral votes for any American presidential candidate, set by Hoover only four years earlier (and would shatter his own record when he was re-elected in 1936 with 523 votes).

Counties with Highest Percent of Vote (Other)