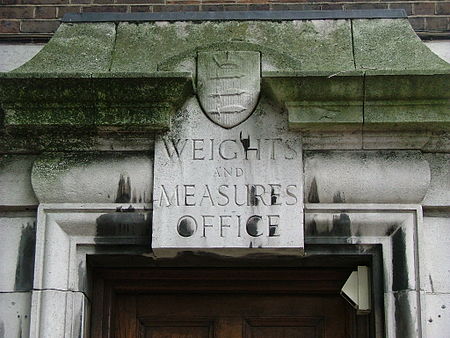 The former Weights and Measures office in Seven Sisters, London 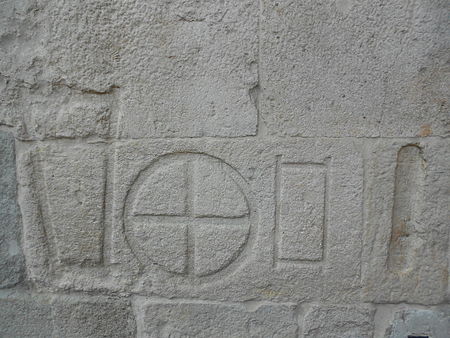 The definition, agreement, and practical use of units of measurement have played a crucial role in human endeavour from early ages up to this day. Different systems of units used to be very common. Now there is a global standard, the International System of Units (SI), the modern form of the metric system.

In trade, weights and measures is often a subject of governmental regulation, to ensure fairness and transparency. The International Bureau of Weights and Measures (BIPM) is tasked with ensuring worldwide uniformity of measurements and their traceability to the International System of Units (SI).

Metrology is the science for developing nationally and internationally accepted units of weights and measures.

In physics and metrology, units are standards for measurement of physical quantities that need clear definitions to be useful. Reproducibility of experimental results is central to the scientific method. A standard system of units facilitates this. Scientific systems of units are a refinement of the concept of weights and measures developed long ago for commercial purposes.

Science, medicine, and engineering often use larger and smaller units of measurement than those used in everyday life and indicate them more precisely. The judicious selection of the units of measurement can aid researchers in problem solving (see, for example, dimensional analysis).

A unit of measurement is a standardised quantity of a physical property, used as a factor to express occurring quantities of that property. Units of measurement were among the earliest tools invented by humans. Primitive societies needed rudimentary measures for many tasks: constructing dwellings of an appropriate size and shape, fashioning clothing, or bartering food or raw materials.

The earliest known uniform systems of weights and measures seem to have all been created sometime in the 4th and 3rd millennia BC among the ancient peoples of Mesopotamia, Egypt and the Indus Valley, and perhaps also Elam in Persia as well.

Weights and measures are mentioned in the Bible (Leviticus 19:35–36). It is a commandment to be honest and have fair measures.

In the Magna Carta of 1215 (The Great Charter) with the seal of King John, put before him by the Barons of England, King John agreed in Clause 35 "There shall be one measure of wine throughout our whole realm, and one measure of ale and one measure of corn—namely, the London quart;—and one width of dyed and russet and hauberk cloths—namely, two ells below the selvage..."

Historically many of the systems of measurement which had been in use were to some extent based on the dimensions of the human body. As a result, units of measure could vary not only from location to location, but from person to person.

A number of metric systems of units have evolved since the adoption of the original metric system in France in 1791. The current international standard metric system is the International System of Units. An important feature of modern systems is standardization. Each unit has a universally recognized size. 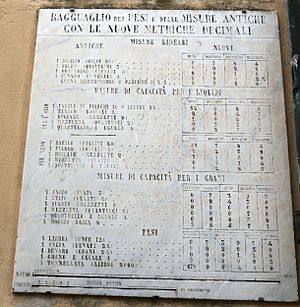 Both the imperial units and US customary units derive from earlier English units. Imperial units were mostly used in the British Commonwealth and the former British Empire. US customary units are still the main system of measurement used in the United States despite Congress having legally authorized metric measure on 28 July 1866.[2] Some steps towards US metrication have been made, particularly the redefinition of basic US and imperial units to derive exactly from SI units. Since the international yard and pound agreement of 1959 the US and imperial inch is now defined as exactly 6998254000000000000♠0.0254 m, and the US and imperial avoirdupois pound is now defined as exactly 6999453592370000000♠453.59237 g.[3]

Also a great number of unusual and non-standard units may be encountered. These may include the solar mass (7030200000000000000♠2×1030 kg) and the megaton (the energy released by detonating one million tons of trinitrotoluene, TNT).

Legal control of weights and measures

To reduce the incidence of retail fraud, many national statutes have standard definitions of weights and measures that may be used (hence "statute measure"), and these are verified by legal officers.

Base and derived units

Different systems of units are based on different choices of a set of base units. The most widely used system of units is the International System of Units, or SI. There are seven SI base units. All other SI units can be derived from these base units.

For most quantities a unit is absolutely necessary to communicate values of that physical quantity. For example, conveying to someone a particular length without using some sort of unit is impossible, because a length cannot be described without a reference used to make sense of the value given.

Calculations with units of measurement

The multiplication sign is usually left out, just as it is left out between variables in scientific notation of formulas. The conventions used to express quantities is referred to as quantity calculus. In formulas the unit [Z] can be treated as if it were a specific magnitude of a kind of physical dimension: see dimensional analysis for more on this treatment.

Units can only be added or subtracted if they are the same type; however units can always be multiplied or divided, as George Gamow used to explain:

A distinction should be made between units and standards. A unit is fixed by its definition, and is independent of physical conditions such as temperature. By contrast, a standard is a physical realization of a unit, and realizes that unit only under certain physical conditions. For example, the metre is a unit, while a metal bar is a standard. One metre is the same length regardless of temperature, but a metal bar will be exactly one metre long only at a certain temperature.

There are certain rules that have to be used when dealing with units:

Expressing a physical value in terms of another unit

with its meaning in terms of the desired unit

are both numerical values, so just calculate their product.

Or, which is just mathematically the same thing, multiply Z by unity, the product is still Z:

For example, you have an expression for a physical value Z involving the unit feet per second (

Or as an example using the metric system, you have a value of fuel economy in the unit litres per 100 kilometres and you want it in terms of the unit microlitres per metre:

One example of the importance of agreed units is the failure of the NASA Mars Climate Orbiter, which was accidentally destroyed on a mission to Mars in September 1999 instead of entering orbit due to miscommunications about the value of forces: different computer programs used different units of measurement (newton versus pound force). Considerable amounts of effort, time, and money were wasted.[5][6]

On 15 April 1999, Korean Air cargo flight 6316（Chinese：-{大韓航空6316號班機空難}-） from Shanghai to Seoul was lost due to the crew confusing tower instructions (in metres) and altimeter readings (in feet). Three crew and five people on the ground were killed. Thirty-seven were injured.[7][8]

In 1983, a Boeing 767 (which came to be known as the Gimli Glider) ran out of fuel in mid-flight because of two mistakes in figuring the fuel supply of Air Canada's first aircraft to use metric measurements.[9] This accident was the result of both confusion due to the simultaneous use of metric and Imperial measures and confusion of mass and volume measures.