From Infogalactic: the planetary knowledge core
Jump to: navigation, search
Not to be confused with the Unitarian Church, the Unification Church, or unitarian theology in Christianity.

Unity, known informally as Unity Church, is a spiritual philosophical movement within the wider New Thought movement and is best known to many through its Daily Word devotional publication. It describes itself as a "positive, practical Christianity" which "teach[es] the effective daily application of the principles of Truth taught and exemplified by Jesus Christ" and promotes "a way of life that leads to health, prosperity, happiness, and peace of mind."[1]

Unity operates several programs, including a prayer program called Silent Unity, the Unity Society of Practical Christianity, Unity School of Christianity, Unity Institute, the Office of Prayer Research, the Association of Unity Churches, and Unity House, the church's publishing arm. The home of Unity is at Unity Village, Missouri, a suburb of Kansas City.

Unity was founded in Kansas City, Missouri, in 1889 by Charles Fillmore (1854–1948) and Myrtle Fillmore (1845–1931) after Mrs. Fillmore had been cured of her tuberculosis, she believed, by spiritual healing. This resulted in the Fillmores' studying spiritual healing and being influenced by Emma Curtis Hopkins and Mary Baker Eddy (the founder of Christian Science).

The Unity Institute and Seminary shares their insights through education programs, magazines, books, and pamphlets. Silent Unity, a telephone and email service, offers people help through prayer and counseling. After World War I, Unity Village was developed 15 miles from Kansas City. The movement was led, in part, after Charles Fillmore’s death, by the Fillmores’ sons and grandchildren.[2] 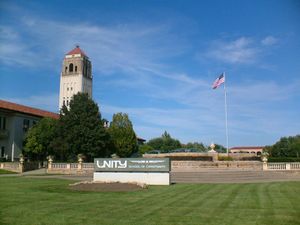 Unity describes itself as a worldwide Christian organization which teaches a positive approach to life, seeking to accept the good in all people and events. Unity began as a healing ministry and healing has continued to be its main emphasis for over 100 years.[3] It teaches that all people can improve the quality of their lives through thought.[4]

Unity describes itself as having no particular creed, no set dogma, and no required ritual.[5] It maintains that there is good in every approach to God and in every religion that is fulfilling someone's needs.[6] Its position holds that one should not focus on past sins but on the potential good in all.[7]

Unity emphasizes spiritual healing, prosperity and practical Christianity in its teachings. Illness is considered to be curable by spiritual means, but Unity does not reject or resist medical treatments.[2] It is an inclusive faith that welcomes diversity of belief. Unity is accepting of the beliefs of others.[8][9][10][11]

Churches fall under the auspices of Unity Worldwide Ministries although each church is autonomous in its practices.

The five basic ideas that Unity sets forward as its main belief system are:[12]

Unity aims to demonstrate that the teachings of Jesus Christ can be lived every day. Its followers believe that the true "Church" is a "state of consciousness in mankind."[13] Unity teaches that each person is a unique expression of God, that each person is sacred, and each person is worthy. Unity emphasizes the creative power of thought in people's experience, and encourages taking personal responsibility to choose life-affirming thoughts, words and actions, holding that when people do this, they experience a more fulfilling and abundant life.[14][15]

H. Emilie Cady's 1896 book Lessons in Truth, A Course of Twelve Lessons in Practical Christianity is considered a core text of Unity.

Unity Church views God as spiritual energy which is present everywhere and is available to all people. Members of the church believe that God only seeks to express the highest good through everyone and everything.[16] According to Unity founder Charles Fillmore:

God is not a person who has set creation in motion and gone away and left it to run down like a clock. God is Spirit, infinite Mind, the immanent force and intelligence everywhere manifest in nature. God is the silent voice that speaks into visibility all the life there is.[17]

He later states that:

God is your higher self and is in constant waiting upon you. He loves to serve, and will attend faithfully to the most minute details of your daily life.[18]

Unity Church followers believe in the divinity of Jesus, but only in the sense that all humans are the children of God and share that divine potential. They believe that Jesus was a master teacher of universal Truth who expressed this divine potential and sought to show others how to do the same by following him.[19][20] Unity uses the term "Christ" to mean the divinity in all people. For them Jesus is the great example of the Christ in physical form.[21][22]

The nature of humanity

Unity Church teaches that we are all individual, eternal expressions of God, and that our essential nature is divine and therefore inherently good. Unity followers believe our purpose in life is to express our divine potential as demonstrated by Jesus, and that the more we awaken to our divine nature, the more we can do this.[23][24] Salvation, in the Unity view, is found in conscious understanding of one's innate divinity and then putting that knowledge into practice in everyday life.[25]

Unity founders, Charles and Myrtle Fillmore, studied the Bible as history and allegory. They interpreted it as a metaphysical representation of each soul's evolutionary journey toward spiritual awakening. Unity understands the Bible as a complex collection of writings compiled over many centuries. The Bible is a valuable spiritual resource, but is understood as a reflection of the comprehension and inspiration of the writers and their times.[26][27][28]

Affirmative prayer is understood, in Unity, as the highest form of creative thought. It includes the release of negative thoughts and holding in mind statements of spiritual truth. Through meditation and prayer, we can experience the presence of God. Prayer and meditation heighten our awareness of truth and thereby transform our lives.[29][30]

Unity teaches that it is helpful to pray with the belief that we have already received all that we need. In this view, through prayer the mind is renewed and the body transformed. The awareness that we are conscious creators of our lives, has the power to make the bridge between the old Christianity where we are "sinners" to the new understanding that we are "learners."[32] The Unity school of Christianity holds that prayer is not a way to inform God of one's troubles or to change God in any way, but rather, prayer is properly used to align with the power that is God.[33][34]

Although Unity is not a traditional Christian teaching, it emphasizes its agreements, not differences, with (traditional) Christians and [8] stresses its concurrence with the teachings of Jesus and the Bible.[35][36][37][38][39][40]

It has been generally accepted that Jesus' great works were miracles and that the power to do miracles was delegated to His immediate followers only. In recent years many of Jesus' followers have inquired into His healing methods, and they have found that healing is based on universal mental and spiritual laws which anyone can utilize who will comply with the conditions involved in these laws.[41][42]

Unity considers itself to be a non-sectarian educational institution although Unity ministers do complete a prescribed program of courses, training and ordination. Due to the interdenominational nature of Unity, its influence extends beyond its membership.[8]

In March 2008 Maya Angelou stated that she planned to spend part of the year studying at the Unity Church. In 2005 she attended a Unity Church service in Miami and decided that day to "go into a kind of religious school and study" on her 80th birthday.[52]