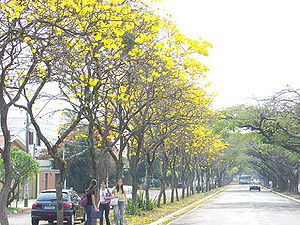 The University of Campinas (Portuguese: Universidade Estadual de Campinas, UNICAMP or Unicamp) is a public research university in the state of São Paulo, Brazil, with its main campus located in the Barão Geraldo district of Campinas and additional campuses in Limeira and Piracicaba.

Consistently ranked as one of the top universities in the country,[4] Unicamp is responsible for around 15% of Brazilian research.[1] Multiple international rankings place Unicamp amongst the best in the world, with QS placing it in the Top 200 globally and the 11th best university under 50 years.[5]

Established in 1962, unlike top brazilian universities which were created by the consolidation of existing schools and institutes, Unicamp was designed from scratch as an integrated research center. Its research focus reflect on having the highest percentage of graduate students in Brazil, 48%.[1] It offers 66 different undergraduate courses and 153 graduate ones.[3]

In the early 1960s the Government of the State of São Paulo had plans to open a new research center in the interior of the state to promote development and industrialization in the region, and commissioned Zeferino Vaz, a former dean of the University of São Paulo's School of Medicine in Ribeirão Preto to organize it. In parallel, a medical school was being planned in Campinas, a demand from the local population that dated from the 1940's. The new university was created by law in December 28th, 1962, but until effective implementation begun in 1966, only the medical school operated, in the building of the Maternity of Campinas.[1]

Over the following two decades, the new university expanded rapidly. In 1968 construction started on a brand new campus, in the district of Barão Geraldo, about 20 minutes from the center of Campinas. Located on farmland donated by a local family, the campus was near the intersections of multiple highways, and would provide a boom for the otherwise small and rural district. [6] The campus quickly grew to 19 institutes and schools, and after Zeferino Vaz passed away in 1981 was name after him. The school of medicine's teaching hospital, Hospital de Clínicas, became the largest public hospital in the region.

The plain where lies the University City "Zeferino Vaz," the name given to the campus in Campinas, Unicamp, was part of Rio das Pedras farm. Property of João Adhemar de Almeida Prado, was "sold" by the symbolic amount of a cruise. Almeida Prado received this value from the president Humberto de Alencar Castelo Branco.

The campus is named after its founder and creator, Professor Zeferino Vaz, who died in 1981. It was he who guided the preparation of the master plan for the university that its "physical and urban layout represented the best possible relationship between the concept and philosophy of the University, its academic and research goals, character and limitations of the terrain, and necessary stages of growth.

The three areas of knowledge were allocated into three sectors: Exact Sciences, Life Sciences and Humanities. These sectors have links to extensions such as the Hospital das Clinicas, Technology Center and Center for Living.

The first building was constructed at the Institute of Biology in 1968. Today, the campus area reaches nearly 3 million square feet and is filled with buildings surrounded by parks and lawns.[7]

There are a total of 24 colleges and schools 10 of which are institutes and 14 which are colleges.[8] The university is also unique that it is home to 22 interdisciplinary Centers and Nuclei.[9] which conduct research and outreach on topics ranging from dance (such as LUME) to computing and education (such as NIED). 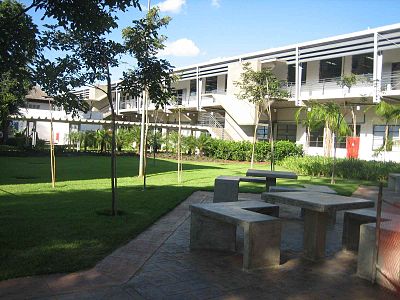 In the background, teaching laboratories of the Institute of Chemistry
File:Fcm-unicamp.jpg
School of Medical Sciences

The School of Medicine (FCM) is the oldest school of the university. Its medical assistance programs, education and research are in a complex that includes Teaching Care Hospital das Clinicas (HC), the Center for Integral Attention to Women's Health (CAISM), the Blood Center, the Gastrocenter, the State Hospital of Sumaré, The Municipal Hospital "Dr. Mario Gatti "and public health centers in the city of Campinas.

FEM has cooperation agreements with institutions and companies[10] like CNPQ, Petrobras, General Motors, Mercedes Benz, Usiminas, the Brazilian Army,[11] US Air Force[12] and others. Agreements between the university and companies and other institutes are common in Unicamp even on projects managed by students like junior enterprises and extracurricular competitions like Formula SAE and EcoCAR.

The Institute of Biology teaches Biological Sciences. It is one of the first three academic units dedicated to teaching, research and extension to be created at Unicamp.

The institute is composed of six departments (Animal Biology; Biochemistry; Genetics and Evolution and Bioagents; Histology and Embryology; Plant Biology; Structural and Functional Biology), and three complementary units: the Herbarium, Zoology Museum and Electron Microscope Laboratory, with about 120 faculty and 190 non-faculty staff.

The Herbarium holds one of the largest collections in Brazil, with 90 thousand specimens, aiding research workers throughout Brazil and abroad in studies of taxonomy, floristic, phytosociology, ecology, plant physiology, floral biology, chemistry, and pharmacology.

The Electron Microscope Laboratory has transmission and scanning electron microscopes and the facilities for the preparation of samples for the study of animal and plant tissues, as well as tissues maintained in culture.[13]

Links to colleges and schools can be found here (in Portuguese). 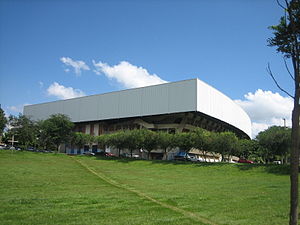 The university has courts for basketball, volleyball, a regulation soccer field, an athletics field with running tracks, a competition swimming pool, a covered gymnasium for indoor spectator sports, which houses also a convention center.

There is also a sports complex in the Faculty of Physical Education. Engenharíadas (Wikipedia) For inter-university competitions there are athletic associations called Ligas (leagues), like LEU (Liga das Engenharias da Unicamp) that unite all the athletes on engineering courses. One of the most famous competitions is Engenharíadas, that is a tournament between engineering colleges end universities. Unicamp is one of strongest competitors and won in 2012, other strong competitors are University of São Paulo and Mackenzie University. 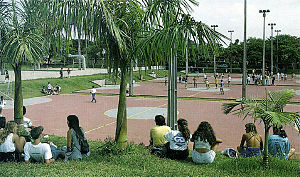 Part of the sports complex of the Faculty of Physical Education

There is athletic associations for each course, that organize sportive events on Unicamp and with other universities. 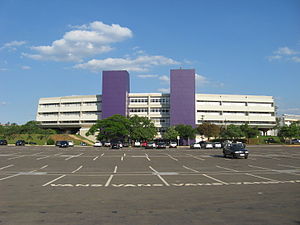 The Library System of Unicamp (Sistema de Bibliotecas da Unicamp; SBU) comprises a central library named in honor of César Lattes, and more than 20 other libraries located in the colleges. Historical libraries and historical and media archives, such as the Arquivo Edgard Leuenroth, have been established. The library system is automated and its collections may be accessed and searched on the Internet. Its Digital Library section supports a database with more than 25,000 dissertations presented in the university, as well access to the largest electronic libraries of academic journals in the world.

The admission for undergraduate courses is based on an annual open competition called vestibular. The only requirement to be filled is to have a complete high school diploma. The Vestibular comprises two stages: the first is usually done in November, with three essays of various themes and a 48-multiple choice test on Mathematics, History, Geography, Physics, Biology, Chemistry and English. Those who get the minimum scores accomplish the second stage in January, taking tests with 12 questions of each subject, two subjects a day: Portuguese (including Brazilian and Portuguese Literature) and Biology; Chemistry and History; Physics and Geography; Mathematics and English. Until 2005, the candidate had option to take a French test instead of English, but it is no longer an option. Classes usually start in March. 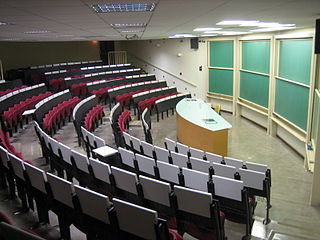 As most Brazilian universities, Unicamp's administration is centralized on the figure of a rector. Unicamp rectors have a mandate of four years, and are chosen by the state governor from a list of three candidates. The candidate list is formed by the three most voted by the university community (staff, faculty and students), and the governor has always chosen the most voted candidate as rector. Zeferino Vaz, who drove the installation and establishment of the university, was the first rector and held the position for 12 years.

The Hospital de Clinicas da Universidade Estadual de Campinas (HCUNICAMP), located within the campus of the University of Campinas, is one of the hospitals of the hospital complex attached to the Faculty of Medical Sciences, UNICAMP.

The HC has a built up area of 65,000.00 square meters. There are more than 4,000 m² in runners over seven blocks. Along with the other hospitals, the hospital complex FCM-UNICAMP has 820 beds.

The hospital trains the students of undergraduate and postgraduate medical and nursing Unicamp's own and other accredited institutions.

Carlos Henrique Brito Cruz left the office early in 2005 to become the scientific director of the research funding agency FAPESP, and elections were anticipated to choose the new rector.

As of August, 2005 the University Council had granted 24 honoris causa doctorate in recognition of contribution made to society by people through their scientific or humanitarian work. This is the full list of the granted people (the date in parentheses designates when the title was delivered).

The National Center for Research in Energy and Materials (CNPEM) is a research center founded in January 22, 2010 that combines the structure of three national laboratories, the National Synchrotron Light Laboratory (LNLS), the National Laboratory of Science and Technology Bioethanol (CTBE) and National Laboratory of Biosciences, formerly called the Center for Structural Molecular Biology (Cebime). Polo II is located in High Technology, in the district of Barao Geraldo, in Campinas, São Paulo state.

The National Synchrotron Light Laboratory (LNLS) is a research institution on physics, structural biology and nanotechnology by developing projects in the areas of Physics, Chemistry, Engineering, Environment and Life Sciences. The laboratory designed in 1983 began operating in 1997 and is located in the District of Baron Gerard of Campinas, São Paulo.

The LNLS has Latin America's only particle accelerator, a synchrotron, used as a synchrotron light source for various physical, chemical, geological, and biological studies.[16] It was designed and built in Brazil.

Brazil has started construction on the third generation of electron accelerators; it will run at 3GeV. The facility, named Sirius, will be made at the National Synchrotron Light Laboratory (LNLS) in Campinas, next to the UVX current storage ring building in the CNPEM campus. With the planned creation of 40 experiment stations, this will practically triple the current capacity of the accelerator. 13 will be included in the original budget plan, with the other 27 included in later renovations.[17]