In the United States, college prep schools are usually private (independent and fee-paying) schools that focus on providing a rigorous academic education, athletic involvement, and varied extracurricular activities and leadership opportunities, on the secondary school (9th-12th-grade) level. Only 1% of U.S. students attend college prep schools. However, in many U.S. cities, there are competitive, state-funded secondary schools, to which admission is gained by examination and/or academic performance, and that offer high quality college/university preparatory educations. Many public secondary schools are considered "preparatory" due to various and specialized programs that prepare their students for college admissions and coursework.

In most parts of Europe, such as Germany, the Netherlands, France, Italy, and Scandinavia, there are state-funded secondary schools specializing in university-preparatory education. These go by many names depending on the country but may be called gymnasia, athenaea, a lycee or a liceo, depending on the nation.

College preparatory schools in the United States, commonly referred to as prep schools, can be either public or private independent secondary schools funded by tuition fees, endowment and donations and governed by independent boards of trustees. Prep schools may be day schools or boarding schools, or both, and may be co-educational or single-sex. Currently day schools are more common than boarding, and since the 1970s co-educational schools are more common than single-sex.[1] Unlike the public schools which are free, they charge tuition ($10,000 to 40,000+ a year in 2014)[2]

He attended Groton, the greatest "Prep" school in the nation, where the American upper class sends its sons to instill the classic values: discipline, honor, a belief in the existing values and the rightness of them. Coincidentally, it’s at Groton that one starts to meet the right people, and where connections which will serve well later on – be it at Wall Street or Washington – are first forged; one learns, at Groton, above all, the rules of the Game and even a special language: what washes and does not wash. [3]

The schools generally address all aspects of the "well rounded" person. This honors the classical ideal that is expressed in the Latin phrase, "Mens sana in corpore sano" ("A sound mind in a sound body") by providing rigorous academics and a strong emphasis on athleticism such as The Ten Schools Admissions Organization, the Founders League, Independent School Leagues, Interschool, or Ivy Preparatory School League. Many prep schools require students to participate in one or more of the school's sports teams, and some require students to participate in a sport during all three athletic seasons. Prep schools also provide many other activities, such as elaborate plays, musicals, clubs, and leadership opportunities that prepare the students for college.

Fewer than 1% of students enrolled in school in the United States attend an independent private preparatory school, a small fraction compared with the 9% who attend parochial schools and 88% who attend public schools. Some, such as St. Paul's School, are affiliated with a particular religious denomination. Unlike parochial schools, independent preparatory schools are not governed by a religious organization, and students are usually not required to receive instruction in one particular religion. While independent prep schools in the United States are not subject to government oversight or regulation, they are accredited by one of the six regional accreditation agencies for educational institutions.[4]

In many U.S. cities, there are competitive, state-funded secondary schools, to which admission is gained by examination and/or academic performance, and that offer high quality college/university preparatory educations. Many public secondary schools[5] are considered "preparatory" due to various and specialized programs that prepare their students for college admissions and coursework.

In France, certain private or public secondary schools offer special post-secondary classes called classes préparatoires, equivalent in level to the first years of university, for students who wish to prepare for the competitive exams for the entrance in the Grandes écoles. Unlike American prep schools then, they begin after high-school graduation. The most famous French classes préparatoires are exceptionally intensive and selective, taking only the very best students graduating from high schools but generally not charging fees. Nevertheless, there exist many less prestigious classes préparatoires where the teachers really care for each student, not only the ones who would enter one of the best Grandes écoles. As a result, 90% of the students in the scientific classes préparatoires eventually become engineers or scientists. 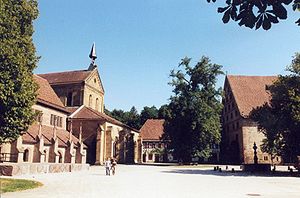 A Gymnasium (plural: Gymnasien) is a particular type of school in Germany and other countries in Europe, with the goal to prepare its pupils to enter a university.

The γυμνάσιον (gymnasion) of Ancient Greece was a place for physical and eventually also intellectual education of young men. The later meaning of intellectual education persisted in German and other languages, whereas in English, the older meaning of physical education was retained. The German Gymnasien are selective and competitive schools. They enroll students after completing 4th or 6th grade (depending on the "Bundesland", i.e., state) and prepare them for college. The vast majority of Gymnasien is public and does not charge tuition fees. Article 7, Paragraph 4 of the German constitution, forbids segregation of students according to the means of their parents (the so-called Sondierungsverbot). Therefore, most private Gymnasien have rather low tuition fees and/or offer scholarships.

Recently, there has been some debate about the Gymnasium and some people put forward the opinion that the Gymnasien are not enrolling enough students from non-east-Asian immigrant families and from working class and lower-class families. As a result of that discussion, the Senate of Berlin ruled that the Gymnasien in the jurisdiction of Berlin should only be able to pick 70% to 65% of their students, the other places at the Gymnasien are to be allocated by lottery. Every child will be able to enter the lottery, no matter how he or she performed in primary school. It is hoped that this policy will increase the number of lower and working class students attending a Gymnasium.[6]

However, according to a 2012 Forsa study for the Berlin Newspaper, the majority of the people in Berlin think that the performance in primary school should dictate whether or not someone can be enrolled at a Gymnasium. A total of zero percent was in favour of the lottery.[7]

In Italy, there are several kinds of high schools, both public and private, whose curriculum has as a primary aim the preparation for university. These are called "Liceo", plural "Licei". The name comes from "Lyceum", the Latin rendering of the Ancient Greek Λύκειον ("Lykeion"), the name of a gymnasium in Classical Athens dedicated to Apollo Lyceus. This original Lyceum is remembered as the location of the peripatetic school of Aristotle.

Until 1969, the Liceo Classico was the only secondary education track that allowed a student access to any kind of Italian university, while other secondary education tracks allowed only a restricted access path; nowadays it carries the reputation of being a highly formative school, one of the few European secondary school types where the study of ancient languages and their literature are compulsory.

There are four main types of Liceo: Liceo Classico (focusing on classical subjects, such as Italian, Latin and Ancient Greek studies, and traditionally divided in two years of "Ginnasio" plus three years of "Liceo"), Liceo Scientifico (lacking Greek to devote approximately equal time to the remaining classical subjects and scientific subjects), Liceo Artistico (focusing on artistic subjects as Art History and Drawing and Liceo Linguistico (focusing on foreign languages such as French, German, Spanish, Chinese: two of these are added to the study of the mandatory language, English).

Other kind of high schools, usually referred to as "technical institutes", also offer the possibility to attain university after graduation, although they also form students to have some kind of professional prospective after graduation.

Main article: Education in the Netherlands

In the Netherlands, the official terminology is voorbereidend wetenschappelijk onderwijs (or vwo) meaning "preparatory academic education". The vwo is divided into the atheneum and gymnasium. These are identical in duration (six years) and level of education, except that the gymnasium includes Latin and Ancient Greek as compulsory subjects in the first few years, and a pupil must include at least one of these classical languages in his final exams. Around three percent of Dutch pupils are enrolled in vwo program.[8] In the Netherlands, education is usually public.

In the Slovak Republic, gymnázium is one of the school types providing secondary education that leads to the maturita exam, a prerequisite for higher education. Gymnáziums are the main school type to prepare students for tertiary education (vysoká škola).

The International Baccalaureate's Diploma Programme in Spain was created in 1968. It is a demanding pre-university course of study that leads to examinations. It is designed for highly motivated secondary school students aged 16 to 19. It recognizes the IB diploma as academically equivalent to "Titulo de bachillerato español". The programme has earned a reputation for rigorous assessment, giving IB diploma holders access to the world’s leading universities. The Diploma Programme is rigorous and is world-renowned. Each student’s performance is measured against well-defined levels of achievement and high standards of academics. These are consistent from one examination session to the next and are applied equally to all schools. The International Baccalaureate has shown that students are well prepared for university work. They are accepted by universities in more than 110 countries.

One school is the Academy School in the Balearic Islands, which is a member of the National Association of British Schools in Spain. It is inspected regularly both by British Inspectors and Inspectors from the Spanish Ministry of Education and Science. Among other prestigious schools are the Hastings School in Madrid, the Caxton College in Valencia, and the Bellver International College in Mallorca. These are internationally recognized by the IB Diploma Programme and academically ranked accordingly.

The International Preparatory Schools are ranked and recognised by the Spanish Ministry of Education and Science (MEC) and all teach a minimum level of Spanish language, science, literature, geography, biology and history. The curriculum also varies from one international school to another.

In addition to disciplinary and interdisciplinary study, the Diploma Programme features three core elements that broaden students’ educational experience and challenge them to apply their knowledge and skills. Students can study and take examinations, in English, French or Spanish.

Notes: A 'preparatory school' in British usage is an independent private fee paying school for younger children aged 8-13 to 'prepare' them for entry into exclusive 'public schools' (which in fact refer to exclusive fee-paying for 13- to 18-year-olds for historic reasons).

Comprehensive schools and sixth form colleges which are both funded by the state, prepare able students for university as do fee-paying public schools. Historically grammar schools would prepare some or most of their pupils for university entrance until funding for these was withdrawn. The only institutions specialising in university entrance are crammers for (usually) privately educated pupils who have failed to gain entrance to their university of choice directly from school.

The Brent International School and similar schools were founded by Americans upon the American college preparatory model in the early 20th Century during the country's American colonial period.

In Singapore, prep schools for universities are known as "junior colleges".

In Japan, prep schools are called "shin-gakkou" (進学校), which literally means a school used to progress into another school. Prep schools in Japan are usually considered prestigious and are often difficult to get into. However, there are many tiers of prep schools, the entry into which depends on the university that the school leads into.[10]