A legend arose in the 14th century that the college was founded by King Alfred in 872.[7] However most agree its foundation was in 1249 by William of Durham. He bequeathed money to support ten or twelve Masters of Arts studying Divinity, and a property which became known as Aula Universitatis (University Hall) was bought in 1253.[3] This later date still allows the claim that Univ is the oldest of the Oxford colleges, although this is contested by Balliol College and Merton College.[8]

Until the 16th century, it was only open to Fellows studying theology. As Univ grew in size and wealth, its medieval buildings were replaced with the current Main Quadrangle in the 17th Century. Although the foundation stone was placed on 17 April 1634 the disruption of the English Civil War meant it was not completed until sometime in 1676.[3] Radcliffe Quad followed more rapidly by 1719, and the Library was built in 1861. 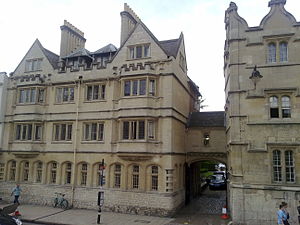 The Logic Lane covered bridge above Logic Lane running through University College, as viewed from the High Street.

The college also owns student accommodation on Staverton Road in North Oxford which houses students after their second year.

A specially constructed building in the College, the Shelley Memorial, houses a statue by Edward Onslow Ford of the poet Percy Bysshe Shelley — a former member of the college, who was expelled for writing The Necessity of Atheism — depicted lying dead on the Italian seashore.

The college also owns the University College Boathouse (completed in 2007 and designed by Belsize Architects)[9] and a sports ground which is located nearby on Abingdon Road.

The Alternative Prospectus is written and produced by current students for prospective applicants. The publication was awarded a HELOA Innovation and Best Practice Award in 2011.[10] The Univ Alternative Prospectus offers student written advice and guidance to potential Oxford applicants. The award recognises the engagement of the college community, unique newspaper format, forward-thinking use of social media and the collaborative working between staff and students.

University has the longest grace of any Oxford (and perhaps Cambridge) college.[citation needed] It is read before every Formal Hall, which is held Tuesday, Thursday, and Sunday at Univ. The reading is performed by a Scholar of the College, the same person doing it for a whole week, and whoever is sitting at the head of High Table (typically the Master or the most senior Fellow at the table if the Master is not dining). The Scholar does not need to know it by heart, and it is unusual for people to do so.

The Grace that must be said every day before dinner in University College.[11]

SCHOLAR — Blessed be God in his gifts.
RESPONSE — And holy in all his works.
SCHOLAR — Our help is in the name of the Lord.
RESPONSE — Who has made heaven and earth.
SCHOLAR — May the name of the Lord be blessed.
RESPONSE — From this time and for evermore.
SCHOLAR — Lord God, the Resurrection and Life of those who believe, You are always to be praised as much among the living as among the departed. We give You thanks for all our founders and our other benefactors, by whose benefactions we are nourished here for piety and for the study of letters. And we ask you that we, rightly using these Your gifts to Your glory, may be brought with them to immortal life. Through Jesus Christ our Lord, Amen.

SCHOLAR — May God give grace to the living, rest to the departed; peace and concord to the Church, the Queen and our Kingdom; and to us sinners, eternal life. Amen.

Many influential politicians are associated with the college, including the social reformer and author of the Beveridge Report William Beveridge (who was a master of University College) and two UK Prime Ministers: Clement Attlee and Harold Wilson (a Univ fellow). US President Bill Clinton and Prime Minister of Australia, Bob Hawke were also students. Other heads of state to have attended Univ include Edgar Whitehead (Rhodesia), Kofi Abrefa Busia (Ghana), and Festus Mogae (Botswana). Nobel Peace Prize Laureate Robert Cecil studied law at the college, while former NATO Supreme Allied Commander Bernard W. Rogers read Philosophy, Politics and Economics as a Rhodes Scholar.[12]

In the arts, people associated with the college include poet Percy Bysshe Shelley (expelled for writing The Necessity of Atheism) for whom there is a memorial in college, Poet Laureate Andrew Motion, author of the Narnia books C. S. Lewis and a Nobel Prize for Literature winner, Sir V. S. Naipaul. One of the translators of the King James Bible, George Abbot, was a master of the college. The actors Michael York and Warren Mitchell attended Univ, as well as broadcaster Paul Gambaccini.

It was due to the college's lack of a mathematics fellow (this is no longer the case) that Stephen Hawking read a natural sciences degree and ended up specialising in physics.[13] Other former students include John Radcliffe (physician), William Jones (philologist), and Edmund Cartwright (inventor). Rudolph A. Marcus, a Canadian-born chemist who received the 1992 Nobel Prize in Chemistry, received a Professorial Fellowship at Univ from 1975 to 1976. A perhaps more unusual alumnus is Prince Felix Yusupov, the assassin of Rasputin.[14]

Univ has the highest proportion of old members offering financial support to the college of any Oxbridge college with 28% in 2007.[15] 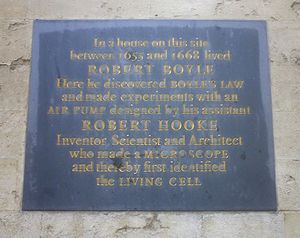 A plaque dedicated to Boyle and Hooke telling of their achievements

Although not members of University College, the scientists Robert Boyle (sometimes described as the "first modern chemist") and his assistant (Robert Hooke, architect, biologist, discoverer of cells) lived in Deep Hall (then owned by Christ Church and now the site of the Shelley Memorial). The former made a contribution to the completion of University College's current Hall in the mid-17th Century.[3]

Samuel Johnson (author of A Dictionary of the English Language and a member of Pembroke College) was a frequent visitor to the Senior Common Room at University College during the 18th Century).[3]