Amongst other rankings and awards, the university was named Irish University of the Year by the Sunday Times on four occasions most recently in 2015/2016.[5] In 2015, UCC was also named as top performing university by the European Commission funded U-Multirank system, based on obtaining the highest number of "A" scores (21 out of 28 metrics) among a field of 1200 partaking universities.[6] UCC also became the first university to achieve the ISO 50001 standard in energy management in 2011.

Dr. Michael B. Murphy has been president of the university since February 2007.[7] 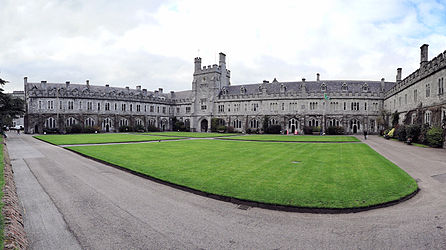 The "Long Hall" and the clock tower of the UCC quadrangle

Queen's College, Cork, was founded by the provisions of an act which enabled Queen Victoria to endow new colleges for the "Advancement of Learning in Ireland". Under the powers of this act, the three colleges of Belfast, Cork and Galway were incorporated on 30 December 1845. The college opened in 1849 with 23 professors and 181 students and a year later became part of the Queen's University of Ireland.

The original site chosen for the college was appropriate in that it is believed to have had a connection with the patron saint of Cork, Saint Finbarr. His monastery and school of learning were close by at Gill Abbey Rock and the mill attached to the monastery is thought to have stood on the bank of the south channel of the River Lee, which runs through the College lower grounds. This association is also reflected in the College motto "Where Finbarr Taught, Let Munster Learn" which is also the university motto.

On this site (on a hill overlooking the valley of the Lee), the Tudor Gothic quadrangle and early campus buildings were built by Deane and Woodward. Over the coming years the College gained a standing for excellence in various fields, including mathematics, medicine and the humanities.

File:Students centre.jpg
UCC Student Centre with the O'Rahilly Arts and Commerce Building opposite

The university is one of Ireland's leading research institutes, with the highest research income in the state.[8] The university's internal research reputation spans all of its faculties where it offers over 120 degree and professional programmes through seven schools and 27 departments. The university had seven faculties in Arts and Celtic Studies, Commerce, Engineering, Food Science and Technology, Law, Medicine, and Science. In recent years,[when?] the University has been restructured so that it now has four colleges: Arts, Celtic Studies and Social Science; Business and Law; Medicine and Health; and Science, Engineering and Food Science.

UCC is home to the Irish Institute of Chinese Studies, which allows students to study Chinese culture as well as the language through Arts and Commerce. The department won the European Award for Languages 2008.[9]

Student numbers, at over 18,000 in 2012, increased greatly from the late 1980s, precipitating the expansion of the campus by the acquisition of adjacent buildings and lands. This expansion continued with the opening of the Alfred O'Rahilly building in the late 1990s, the Cavanagh Pharmacy building, the Brookfield Health Sciences centre, the extended Áras na MacLéinn (Devere Hall), the Lewis Glucksman Gallery in 2004, Experience UCC (Visitors' Centre) and an extension to the Boole Library – named for the first professor of mathematics at UCC, George Boole, who developed the algebra that would later make computer programming possible. The University also completed the Western Gateway Building in 2009 on the site of the former Cork Greyhound track on the Western Road as well as significant refurbishment to the Tyndall institute buildings at the Lee Maltings Complex.

The university has a number of related companies including: Cytrea,[10] which is involved in pharmaceutical formulations; Firecomms,[11] an ICT company concentrating on optical communications; Alimentary Health[12] a biotech healthcare company; Biosensia[13] who develop integrated micro-system analytical chips; Sensl developers of low light sensors and imaging systems; Luxcel[14] which is involved in the development of probes and sensors for the pharmaceutical and food safety industries; and Optical Metrology Innovations[15] who develop laser metrology systems.

Also in 2006, the University re-opened the Crawford Observatory, a structure built in 1880 on the grounds of the university by Sir Howard Grubb. Grubb, son of the Grubb telescope building family in Dublin, designed the observatory and built the astronomical instruments for the structure. The University paid for an extensive restoration and conservation program of the building and the three main telescopes, the Equatorial, the Transit Circle and the Sidereostatic telescope.[16]

In October 2008, the governing body of the university announced that UCC would be the first institution in Ireland to use embryonic stem cells in research.[17]

In November 2009, many UCC buildings were damaged by unprecedented flooding.[18] The floods also affected other parts of Cork City, with many students being evacuated from accommodation. The college authorities postponed academic activities for a week,[18] and indicated that it would take until 2010 before all flood damaged property would be repaired. A major scene of damage was the newly opened Western Gateway Building, with the main lecture theatre requiring a total refit just months after opening for classes.[19]

As of 2015, the university has planned a number of celebrations to mark the bicentenary of mathematician, philosopher and logician George Boole - UCC's first professor of mathematics.[20][21]

UCC has also been recognised for its digital and social media presence, including for 'Best Social Media Engagement' category at the 2014 Social Media Awards,[32] and as a finalist for 'Best Use of Social Media by a State Body' and 'Best Non-Profit/Organisation Twitter Account' at the 2015 Social Media Awards.[32] A previous finalist at the 2013 and 2014 Web Awards, UCC also made the 2015 finals in two categories,[33] 'Most Influential Irish Website Ever' and 'Best Education and Third Level Website'. University College Cork had the first website in Ireland in 1991[33] (only the ninth website in the world at the time), serving transcriptions of Irish historical and literary documents for the CELT project converted from SGML to HTML.

College of Medicine and Health

Medicine, Arts, and Law were the three founding faculties when Queen's College Cork opened its doors to students in 1849. The medical buildings were built in stages between 1860 and 1880, and the faculty quickly gained a reputation for the quality of its graduates. The first two women to graduate in medicine in Ireland did so in 1898 (this was notable as it was more than 20 years before women were permitted to sit for medicine at the University of Oxford).[34] UCC School of Medicine is part of the College of Medicine and Health, and is based at the Brookfield Health Sciences Centre on the main UCC campus and is affiliated with the 880-bed University College Cork Teaching Hospital, which is the largest medical centre in Ireland. The UCC School Of Pharmacy is based in the Cavanagh Pharmacy Building.[34]

According to the 2009-2012 UCC Strategic plan,[35] UCC aimed to enhance research and innovation. In 2009, the university was ranked in the top 3% of universities worldwide for research.[36]

UCC's published research strategy proposed to create "Centres of Excellence" for "world class research" in which the researchers and research teams would be given "freedom and flexibility to pursue their areas of research".[35] Research centres in UCC cover a range of areas including: Nanoelectronics with the Tyndall Institute; Food and Health with the Alimentary Pharmabiotic Centre,[37] NutraMara,[38] Food for Health Ireland Research Centre,[39] and Cereal Science Cork[40] (food research at UCC ranks 4th in the world);[citation needed] the Environment with the Environmental Research Institute[41] (with research in biodiversity, aquaculture, energy efficiency and ocean energy); and Business Information Systems.[42]

The Sunday Times "Good University Guide 2015", put UCC at the top of their rankings for "research income per academic".[25]

University College Cork has over 80 active societies[47] and 50 different sports clubs.[48][49] There are academic, charitable, creative, gaming/role-playing, political, religious, and social societies and clubs incorporating field sports, martial arts, watersports as well outdoor and indoor team and individual sports. UCC clubs are sponsored by Bank of Ireland, with the UCC Skull and Crossbones as the mascot for all UCC sports teams. 100 students received scholarships in 26 different sports in 2010.[48]

The regular activities of UCC's societies include charity work; with over €100,000 raised annually by the Surgeon Noonan society, €10,000 raised by the War Gaming and Role Playing Society (WARPS) through its international gaming convention WARPCON, €10,000 raised by the UCC Law Society for the Cambodia orphanage and the UCC Pharmacy Society supports the Cork Hospitals Children's Club every year with a number of events.[50] UCC societies also sometimes attract high-profile speakers such as Robert Fisk who addressed the Law Society, Nick Leeson[50] and Senator David Norris, who was the 2009/2010 honorary president of the UCC Philosophical Society.[51]

The UCC Students' Union (UCCSU) acts as the representative body of the 17,000 students attending UCC. Each student is automatically a member by virtue of a student levy.

Students attending UCC occupy a variety of accommodation types. Some opt to live with family while others live in rented accommodation. UCC has its own Accommodation and Student Activities office which provides students with advice and information on renting accommodation in Cork City[52] while UCC's Campus Accommodation company looks after approximately 860 beds in four different apartment complexes within 1.5 km of the UCC main campus.[53]

The largest number of the 2,400 international students at UCC in 2010 came from the USA, followed by China, France and Malaysia.[54] UCC participates in the Erasmus program with 439 students visiting UCC in 2009–2010.[54] 201 UCC students studied in institutions in the USA, China and Europe in the same period.[54]

UCC was rated highly in the 2008 International Student Barometer report.[55] This survey polled 67,000 international students studying at 84 institutions, and was carried out by the International Insight Group.[55] The report held that 98% of UCC's international students (who participated in the survey) reported having "Expert Lecturers". And over 90% of these students said that they had "Good Teachers".[55] In 3 categories of the survey, "sports facilities", "social facilities" and "university clubs and societies", UCC was in the top three of the 84 Institutions that took part in the survey. UCC's International Education Office was given a 93% satisfaction rating and UCC's IT Support was given a 92% satisfaction rating.[55]

Notable alumni of the University include graduates from different disciplines.

George Boole was the first professor of mathematics at UCC. He developed Boolean algebra that would later make computer programming possible.[56]