From Infogalactic: the planetary knowledge core
Jump to: navigation, search
This article is about the main campus of Penn State University. For the borough, see State College, Pennsylvania.
Not to be confused with University City, Philadelphia.

University Park sits within the State College Metropolitan Statistical Area (population 153,990), which encompasses all of Centre County, Pennsylvania. The ZCTA for ZIP code 16802 had a population of 12,764 at the 2010 census.[2] 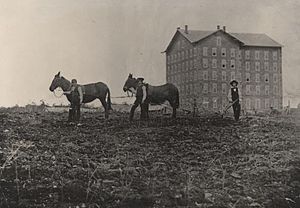 The school that later became Penn State University was founded as a degree-granting institution on February 22, 1855, by act P.L. 46, No. 50 of the General Assembly of the Commonwealth of Pennsylvania as the Farmers' High School of Pennsylvania. Centre County, Pennsylvania, became the home of the new school when James Irvin of Bellefonte, Pennsylvania, donated 200 acres (0.8 km2) of land – the first of 10,101 acres (41 km2) the school would eventually acquire. In 1862, the school's name was changed to the Agricultural College of Pennsylvania, and with the passage of the Morrill Land-Grant Acts, Pennsylvania selected the school in 1863 to be the state's sole land-grant college. The school's name changed to the Pennsylvania State College in 1874; enrollment fell to 64 undergraduates the following year as the school tried to balance purely agricultural studies with a more classic education.

In 1953, the university sought a name change for the town called State College to reflect the new status of the school as a university. As the name change referendum failed to pass, the resolution ended with a new postal address to be called "University Park".

The campus is served by the Penn State University Police.

The campus is served by the Centre Area Transportation Authority through bus services and the University Park Airport for commercial air traffic.

Within the campus, a student government is a set of elected positions by the student body to represent the voice of the students with it relations with the university and is divided between undergraduate and graduate students.

Special interest groups representing minorities also exist within the campus also have an influence towards university policies that get enacted by the university.

At the local level, Elizabeth Goreham is the mayor. At the state level, the campus representation is through the Pennsylvania Senate, District 34, represented by Jake Corman. Federally, the University Park campus is part of Pennsylvania's 5th congressional district, represented by Republican Glenn "G.T." Thompson, elected in 2008.

The residence commons are common areas for each of the residence hall areas. Each one has a dining hall and a computer lab. At one point in time, each had a radio station. WEHR (East Halls Radio), which operated in Johnston Commons until 2005, was the last to survive.

East Halls is the largest group of residence halls on campus, and is served by Findlay/Johnston Commons. It is reserved primarily for first-year student housing, and most residents share a double room with a roommate. The area's special living options are First-Year Interest in Liberal Arts and Education and Tri-Service ROTC. All of the buildings in the East Halls residence area are named after former governors of Pennsylvania.[3] All of the halls and commons within East Halls are connected via an underground maintenance tunnel system (entrance doors locked). The residence halls are:

North Halls is the smallest residence hall complex at the University Park campus, consisting of four residence halls. They are known as the most comfortable on campus, with all rooms being carpeted and having their own bathroom. Nearly all rooms in North residence halls are suites for two or four students, however there are a few rooms for only a single resident. The two- and four-person suites are made up of four rooms with two bedrooms with a shared living room separating them, and the bathroom connected to the shared living room. 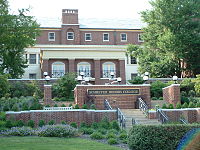 South Halls offers housing for Schreyer Honors College students in Atherton and Simmons, and in addition offers male, female and co-ed residence halls. [7][8] At one point both McElwain Hall and Simmons Hall both contained a dining complex, but as of May 2011 their dining areas were eliminated to increase residential room space.[9] South Halls also contains housing for sororities. On a Residence Life basis, McElwain has been moved to the Pollock Residential Life area.

*A Wet Core restroom concept eliminates the need to have "gender specific" restrooms in that there is a common sink space that everyone shares with every toilet/shower in a separate room behind a locked door. The wet core concept eliminates the traditional restroom design and allows for more privacy for any student without having to worry about gender obstacles.

Nittany Apartments and Suites provide the luxury of apartment and suite living while allowing students to still live on campus. Nittany Apartments houses same-sex students in either two-bedroom or four-bedroom apartments, complete with bathroom, living room, and kitchen. Nittany Suites—made up exclusively of Nittany Hall—houses single upperclass students in two-bedroom suites. Four people live in each suite. These living areas are available to upperclass students.[10]

Eastview Terrace is a residence location specifically for sophomores, juniors, and seniors. It houses 806 undergraduates, providing a private bedroom and bath for each student.[11] Its location, east of South Halls, is perfect for an atmosphere that feels as though it off campus while remaining on campus. Additional charges do apply to Eastview Terrace rooms.