History of the Press 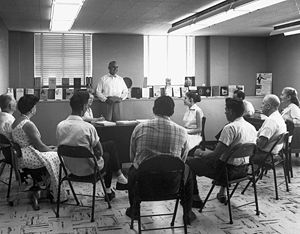 Founded in 1945 and located in Gainesville, Florida near the campus of one of the state's major research universities, University Press of Florida is the oldest book publisher in the state and one of the largest university presses in the Southeast. It was founded as the University of Florida Press with a commitment to books about the region, as exemplified by its first title, Florida Under Five Flags, a centennial history of the state by Rembert Patrick. UPF has published almost 2,500 volumes with a staff of 41. It has undergone a total conversion to electronic editing and production and boasts efficient schedules and procedures in place to release about 100 new titles each year in the areas of international studies, archaeology, dance, history, literature, political science, and many others. A member of the Association of American University Presses,[2] UPF ranks in the top-third of member presses for sales and new title production.

As UPF's predecessor, the University of Florida Press, began to build a successful publishing program, other public universities in Florida took notice and established presses of their own. To avoid replication of efforts among the campuses, the Florida Board of Regents established a decentralized, system-wide consortium in 1973 that was known as the University Presses of Florida. Featuring independent editorial and financial controls on each of the state system's nine campuses, this structure brought all of the state's public universities into the publishing process.[3]

Throughout the changes in organization, the press has maintained its status as the premier publisher of scholarly and general interest books in the state of Florida. Reflecting the quality and scope of UPF’s list, books from the press have received awards from many academic organizations as well as Choice Outstanding Book and Association of American University Presses design awards. Others have been named to Amazon.com’s best-seller list and chosen for book clubs. Both academic and general interest books have received accolades from national and international media, from starred reviews in Publishers Weekly and a featured essay in the New York Times Book Review to major attention from the New York Review of Books, the Times Literary Supplement, Village Voice, The Nation, Playboy, Oxford American, and various wire services. In 2006, UPF was hailed as a "publishing powerhouse" by the Gainesville Sun.

Directors of the Press

Books Published by the University Press of Florida

Current publications by UPF can be found on the UPF website. UPF also publishes Orange Grove Texts Plus (OGT+) which are Open Access textbooks, and are available in an Open Access repository powered by the SobekCM Open Source software. Additionally, UPF and UPF authors in some cases have granted materials for their publications to be available as Open Access, and many are available from the University of Florida Digital Collections and can be seen here.