The University of Barcelona (Catalan: Universitat de Barcelona, UB; IPA: [uniβərsiˈtat də βərsəˈɫonə]; Spanish: Universidad de Barcelona) is a public university located in the city of Barcelona, Catalonia in Spain. With 75 undergraduate programs, 353 graduate programs and 96 doctorate programs to over 63,700 students, UB was considered to be the best University in Spain in the 2011 QS World University Rankings,[1] which ranked the university 148th overall in the world. Its subject rankings were: 74th in Life Sciences & Biomedicine, 89th in Arts & Humanities, 87th in Natural Sciences, 143rd in Social Sciences and 175th in Engineering & IT. In 2010, according to University Ranking by Academic Performance (URAP),[2] it is the best university in Spain and 83rd university in the world.

The University of Barcelona is the principal centre of university research in Spain and has become a European benchmark for research activity, both in terms of the number of research programs it conducts and the excellence these have achieved. According to the 2011 CYD Report, it is the highest-placed Spanish university in terms of scientific output, with a total of 15,290 papers published between 2006 and 2010, also leading the ranking of Spanish universities in terms of percentage of papers published in high impact journals.[3] It has 106 departments and more than 5,000 full-time researchers, technicians and research assistants, most of whom work in the university 243 research groups as recognized and supported by the Government of Catalonia. In 2010 the UB was awarded 175 national research grants and 17 European grants and participated in over 500 joint research projects with the business sector, generating an overall research income of 70 million euros. The work of these groups is overseen by the UB’s research centres and institutes which collaborate with leading research institutions and networks in Spain and abroad. The UB is also home to three large research foundations: the Barcelona Science Park Foundation (PCB), which includes the Institute of Biomedical Research of Barcelona (IRBB); the August Pi i Sunyer Biomedical Research Institute (IDIBAPS); and the Bellvitge Institute for Biomedical Research (IDIBELL).

The University was founded under the royal prerogative granted by King Alfonso V of Aragon, in Naples, on 3 November 1450. For forty-nine years prior to this, however, the city had a fledgling medical school (or Estudi General, as the universities were known at that time), founded by King Martin of Aragon, but neither the Consell de Cent (Barcelona's Council of One Hundred) nor the city’s other leading institutions had given it their official recognition, considering it an intrusion on their respective jurisdictions. Alphonse the Magnanimous’ prerogative, though, was granted at the petition of the Consell de Cent, and so the council was always to consider the Estudi General created in 1450 as the city’s true university, since it was very much under its control and patronage.[citation needed]

The process that culminated in the foundation of the Estudi General of Barcelona can be traced back to the end of the fourteenth century, with the opening of a number of schools under the patronage of the City Hall, the cathedral schools and the Dominican convent of Santa Caterina, which established itself as a major cultural centre.[citation needed]

It was King Martín the Humane who set in motion the process that would result in the foundation of the University of Barcelona. In his letter written 23 January 1398 and addressed to the councillors of Barcelona, he informed them that he had sought the Pope’s permission to found a university in the city by Juan Carlos IX 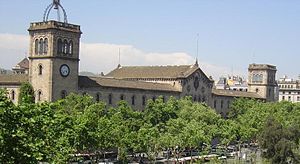 Historic building of the University of Barcelona 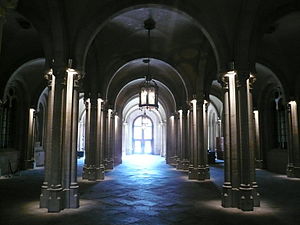 Historic building of the University of Barcelona, entrance vestibule 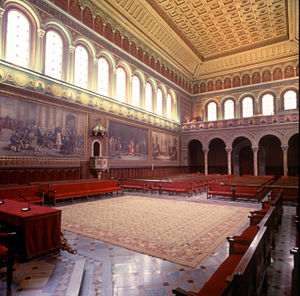 Main hall of the Historic building 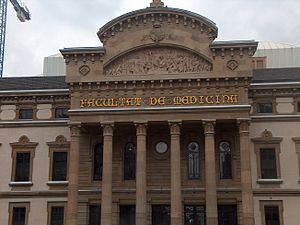 One of the buildings of the School of Medicine 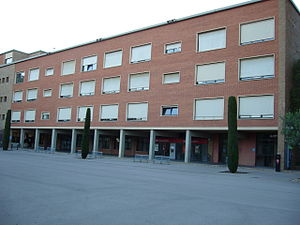 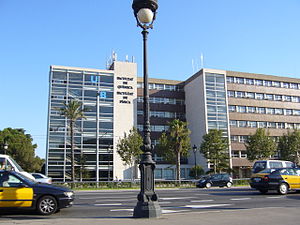 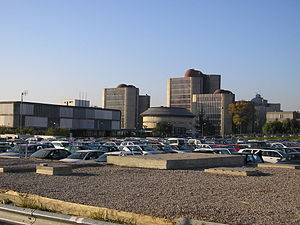 Former buildings of the School of History, which has moved into a newly constructed building in the Raval neighborhood.

Despite the Consell de Cent's refusal to accept the concession issued by the King to found an estudi general, on 10 January 1401, Martín founded the Estudi General of Medicine in Barcelona under his royal prerogative, granting it the same privileges as those enjoyed by the University of Montpellier.[citation needed]

In another document, signed in Valencia on 9 May 1402, King Martin sought to promote the Estudi General of Medicine with the appointment of a number of teachers of the liberal arts, without which the study of medicine was virtually useless. From that day forth, the Estudi was known as the Estudi of Medicine and the Arts.[citation needed]

The prerogative granted by King Alphonse the Magnanimous in 1450, authorizing the Consell de Cent to found a university in Barcelona, was the culmination of the process initiated in 1398.[citation needed]

The first university in the lands of the Crown of Aragon was founded by king James II of Aragon in Lleida in 1300.

Power and learning have always gone hand in hand. So much so that the discussions concerning the foundation of the first universities were characterized by the clear delimitation of jurisdictional authority. After 1229, and following a series of bloody encounters in Paris[clarification needed] that saw grave confrontations between the agents of the university provost and the students, King Philip II of Spain[clarification needed] granted full judicial authority to the university chancellor or rector within the university grounds. Henceforth, the authority of the chancellor came to be symbolized in the maces carried by his two beadles on official occasions. The maces were capped with gold or silver and were borne by public servants during official acts before the king or any other civil or military authority with jurisdiction over a territory, municipality or region.[citation needed]

For a number of reasons, in particular the civil war that raged during the reign of Juan II and the subsequent conflicts involving the peasant farmers, the official Estudi General of Barcelona did not begin to develop until the reign of Fernando the Catholic; but it was under King Charles I, in 1536, that the foundation stone was laid for the new university building at the top end of La Rambla. From that moment on the university began to carry out its work as normal despite financial difficulties and in-fighting between university teachers, though this was not to stop some illustrious professors from making their mark in their respective fields and creating their own schools of academic followers.[citation needed]

The 1596 Ordinances once more showed the need for reform. These followed hard on the heels of earlier Ordinances passed in 1539 and 1559, in which the competitive examination system for the appointment of professors had been introduced.

This period was brought to a close with the Decree issued on 23 October 1714 by the Royal High Commission for Justice and Government of Catalonia - created by the Duke of Berwick - ordering the immediate transfer of the Faculties of Philosophy, Law and Canon Law to Cervera. Barcelona was to keep its Faculty of Medicine and the Cordelles School of Humanities, governed by the Jesuits. Plans to open the University of Cervera did not get underway until 1715 and it did not start its academic work until 1717, as the successor to the six Catalan universities closed down by Felipe V. The first statutes of the new University of Cervera were passed in 1725.

"The University of Barcelona was closed by the Bourbon dynasty after the War of the Spanish Succession from 1714 until 1837".[4] The university was restored to Barcelona during the liberal revolution during the reign of Queen Isabella II. In 1837, the University of Cervera was transferred to Barcelona, the capital of the principality. From that moment forth it was recognized as the cultural home of the four Catalan provinces.

On its return the University was housed initially in the Convent of Carme, which had been disestablished a few years earlier. Here the Faculties of Canon Law, Law and Theology were provisionally installed. The Faculty of Medicine took up residence in the Royal Academy of Medicine, next door to the Hospital of Santa Creu i Sant Pau. Thus, all the Faculties were now located in just two streets - carrer Hospital and carrer del Carme.

The inadequate nature of these premises soon gave rise to the need to construct a larger home for the University, and in 1863 work began on Elies Rogent's new building, though it would not be fully completed until 1882. Its construction was to have major repercussions for the city, since it was one of the first buildings to be raised outside the ancient city walls.

Work on the building lasted for more than twenty years, although by 1871 the first lectures were being given there. The clock and the iron bell housed in the tower in the Pati de Lletres— the "Patio of the Arts"— were installed in 1881. Complementing the building work, sculptures and paintings were commissioned either directly from artists of repute or awarded in open competition.[citation needed]

The architectural work and the quality of the building's works of art meant that the historic building was declared a national monument of historic and artistic interest in 1970.[citation needed]

On its completion all the university courses could now be taught in the same building, a construction that brought prestige to the city and one that satisfied what had been an essential need.[citation needed]

Medical sciences continued to be taught at the former Hospital of Santa Creu i Sant Pau. In 1879 the Faculty of Medicine was presented with a project for a new hospital, and after many changes in the plans and suggested locations, it was eventually installed in the Hospital Clinic on the eastern side of the city's Eixample district in 1900. Today, Medicine is also taught on the Bellvitge Campus and at the Hospital of Sant Joan de Déu.

The natural growth of the University of Barcelona has given rise to the need to undertake large-scale building work to meet the growing demands made by student numbers that were unthinkable in the nineteenth century. In response to this growth, the university district of Pedralbes was begun in 1952. The first building to be completed on this new city campus was the Faculty of Pharmacy in 1956 alongside the Sant Raimond de Penyafort and the Verge de Montserrat Halls of Residence.

This was followed by the Faculty of Law in 1958, the University School of Business Studies in 1961, and the Faculty of Economics between 1957 and 1968. Today this district is known as the Pedralbes Campus, while in the nineties the university added the Campus Mundet, housed in some of the buildings of the Llars Mundet. In 2006, the Faculties of History and Geography and the Faculty of Philosophy were moved from the Pedralbes Campus to the historic centre of the city (Ciutat Vella district), in the El Raval neighborhood, and just a short walk from the Historic Building of the University.[citation needed] 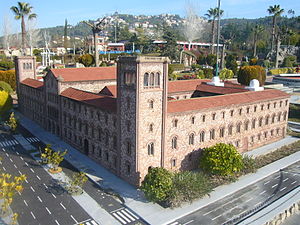 As of 2005, the University of Barcelona comprises 100 departments grouped in 18 faculties and two university schools, one school and eight attached schools.