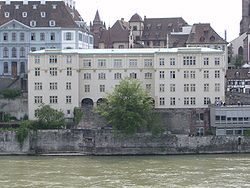 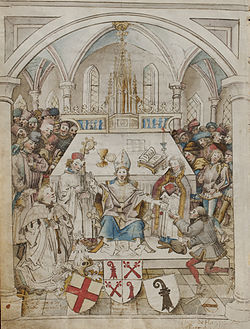 Inauguration ceremony of the University of Basel, 1460

Founded in 1460, it is Switzerland's oldest university.[6]

The University of Basel was founded in connection with the Council of Basel. The deed of foundation given in the form of a Papal bull by Pope Pius II on November 12, 1459, and the official opening ceremony was held on April 4, 1460.[8] Originally the University of Basel was decreed to have four faculties—arts, medicine, theology and jurisprudence. The faculty of arts served until 1818 as foundation for the other three academic subjects. In the eighteenth century as Basel became more commercial, the university, one of the centers of learning in the Renaissance, slipped into insignificance. Enrollment which had been over a thousand around 1600, dropped to sixty in 1785 with eighteen professors. The professors themselves were mostly sons of the elite.[9]

Over the course of centuries as many scholars came to the city, Basel became an early center of book printing and humanism. Around the same time as the university itself, the Basel University Library was founded. Today it has over three million books and writings and is the largest library in Switzerland.

In 1830 the Canton of Basel split in two with the Federal Diet requiring that the canton's assets, including the books at the University library, be divided—two thirds going to the new half canton of Basel-Landschaft. The city, Basel-Stadt, had to buy back this share and the university became so impoverished that it drastically reduced its course offerings. Students were expected to continue their education after two years or so at a German university. In 1835 the enrollment at the university was forty students, mostly from the area.[9]

At the end of the 1990s the University entered a period of crisis; the management of the University was strongly criticized; Vice-Rector Gian-Reto Plattner wrote that "when no solution is found, the University must be closed. That would be more honest than allowing it to sink to the level of a simple college."[10]