The University of Bath is a public university located in Bath, Somerset, United Kingdom. It received its Royal Charter in 1966 and can trace its roots to a technical school established in Bristol in 1856.

According to The Times Higher Education Student Experience Survey 2015 the University of Bath is the best university in the UK for student experience.[3] In The Times and The Sunday Times Good University Guide 2014 the university was awarded the title of "Best Campus University in Britain".[4] Bath was awarded the title of ‘University of the Year 2011/12’.[5] In the 2014 Research Excellence Framework, 32% of Bath's submitted research activity achieved the highest possible classification of 4*, defined as world-leading in terms of originality, significance and rigour. 87% was graded 4*/3*, defined as world-leading/internationally excellent.[6]

The University of Bath can trace its roots to a technical school established in Bristol in 1856, the Bristol Trade School. In 1885 the school became part of the Society of Merchant Venturers and was renamed the Merchant Venturers' Technical College (whose alumni include the physicists Paul Dirac and Peter Higgs), an institution founded as a school in 1595.[7] Meanwhile, in the neighbouring city of Bath, a pharmaceutical school, the Bath School of Pharmacy, was founded in 1907. This became part of the Technical College in 1929.

In 1963, the Robbins Committee report paved the way for the college (along with a number of other institutions) to assume university status as Bath University of Technology.

Although the grounds of Kings Weston House, in Bristol, were briefly considered — which then, and until 1969, accommodated the College's School of Architecture and Building Engineering — the City of Bristol was unable to offer the expanding college an appropriately sized single site. Following discussions between the College Principal and the Director of Education in Bath, an agreement was reached to provide the college with a new home in Claverton Down, Bath, on a greenfield site overlooking the city.

Construction of the purpose-built campus began in 1964, with the first building, now known as 4 South, completed in 1965, and the Royal Charter was granted in 1966. In November 1966, the first degree ceremony took place at the Assembly Rooms in Bath. Over the subsequent decade, new buildings were added as the campus took shape.

The city records reveal that there were plans in the mid-19th century to build a college of the University of Oxford on the very same site, which would have resulted in a university of a very different character. Such plans, however, did not come to fruition.

The university logo features the so-called Gorgon's head which is taken, via the university's coat of arms, from a Roman sculpture found in the city.[8]

The university's main campus is located on Claverton Down, a distance from the centre of Bath. The site is compact; it is possible to walk from one end to the other in fifteen minutes. The design involved the separation of vehicular and pedestrian traffic, with road traffic on the ground floors and pedestrians on a raised central thoroughfare, known as the Parade. Buildings would line the parade and student residences built on tower blocks rise from the central thoroughfare. Such plans were mostly followed.

At the centre of the campus is the Library and Learning Centre, a facility open round the clock offering computing services, information and research assistance as well as books and journals. A number of outlets are housed around the parade, including restaurants, bars and fast-food cafés, plus three banks, a union shop, and one small general and one oriental supermarket, as well as academic blocks. Building names are based on their location and distance vis-à-vis the library (e.g. 1 East, 2 East). Odd-numbered buildings are on the same side of the parade as the library, and even-numbered buildings are on the opposite side.

Buildings along the east-west axis are mostly directly accessible from the parade, which is generally considered to be "level two", but later additions, such as 7 West, 9 West, 3 West North and 8 East, follow the rule less strictly. 7 West is generally accessible only via 5 West or 9 West, and 3 West North, 9 West and 8 East have entrances at ground level at varying distances from the main parade. Buildings on the south of the campus, 1 South to 4 South, are accessible via roads and pedestrian walkways by the university lake and gardens.

Buildings, as in many of the so-called plate glass universities, were constructed in a functional modernist style using concrete although such designs were later derided for lacking the charm of the Victorian red-brick universities or the ancient and medieval ones. In Bath, there is a particular contrast between the concrete campus and the Georgian style architecture of the World Heritage City of Bath.

The eastern part of the campus is dominated by the Sports Training Village, built in 1992 and enhanced in 2003 with an extension.

The northern perimeter of the university is bounded by student residences Westwood, Eastwood, Brendon Court, Polden Court, Solsbury Court, Marlborough Court and Woodland Court. The original plan for students to be housed in tower blocks above the parade continues with a small number of rooms (110) in Norwood House. However, the second tower block, Wessex House, now hosts a number of offices rather than residences.

The university also owns buildings in the City of Bath, mostly student residences dotted around town, although Carpenter House is also home to a lifelong learning centre and a business facility (the Innovation Centre).

University of Bath (Claverton Down Campus)

Over several years, the grounds have received recognition for their outstanding beauty with awards from Bath in Bloom.[9]

The university continually upgrades its Claverton Down campus with new teaching blocks. A proposal to move the boundary of the green belt away to the edge of the campus to facilitate further development was agreed in October 2007 by the local council following a public inquiry, although the boundary of the Cotswolds Area of Outstanding Natural Beauty still crosses the site. In July 2005, building 3 West North (officially opened on 27 October) was completed. The deconstruction of the asbestos-contaminated 4 West was completed in mid-2005 and the 4 West building opened in April 2010 providing additional teaching and office space.

University of Bath in Swindon

The university opened a second site, Oakfield Campus, in 2000 on Marlowe Road Swindon, on a site leased from the Council. Formerly Oakfield School, the site was jointly funded by the university and Swindon Council. Officially The University of Bath in Swindon, the campus offered undergraduate courses in childhood studies and social work.[15] The campus was closed in the summer of 2008.[16]

Under the Gateway Project, the university had planned to build a major new campus next to the Great Western Hospital and the Coate Water nature reserve. The project had met opposition from environmentalists and locals[17] but had met with Government approval.[18] The university withdrew from the project in March 2007 citing "prevailing planning and funding conditions".[19]

The university is divided into four faculties and each faculty into various departments.

The university's major academic strengths have been engineering (particularly electronic and electrical and mechanical), the physical sciences, mathematics and technology. Today, the university is also strong in management, humanities, architecture and the social sciences. Courses place a strong emphasis on vocational education; the university recommends students to take a one-year industry placement in the penultimate year of the course, although there is no formal recognition of these placements on students' final degree certificates.

Bath has been awarded the Queen's Anniversary Prize twice. In 2011, the university received the award for the Department of Social & Policy Sciences' 'Influential research into child poverty and support for vulnerable people'.[21] The university also received the prize in 2000 to recognise the 'invaluable services to industrial and scientific communities' of the Centre for Power Transmission & Motion Control.[22]

Bath is 11th in the Complete University Guide League table and has 21 out of 28 subjects placed within the top 10 in the UK.

Bath is ranked in the top ten of 123 universities across the UK in the Good University Guide.[33] The university is ranked second overall in the student satisfaction criteria and third for graduate prospects (the percentage of graduates in professional jobs or postgraduate study six months after leaving university).

Bath is ranked joint 7th in the world in the ‘QS top 50 universities under 50’[34] table for 2015. The rankings are based on the same criteria as for the QS World University Rankings – size, subject range and research intensity – but with the fourth aspect, age, restricted to those less than 50 years old.

The university is ranked 42nd in the Times Higher Education ‘100 under 50’ table.[35] This table was compiled using the same criteria as their World University Rankings but with the weighting for academic reputation reduced to recognise the fact that older universities have deeper and more established alumni networks.

Bath is ranked first out of 113 UK institutions in the latest Times Higher Education (THE) Student Experience Survey, published on 9 April 2015.[36] The university was and finished top or equal first in five of the criteria on which universities were judged, including good industry connections and good community atmosphere.

Admissions at Bath are competitive with 7.4 applications for each place for 2013 entry and the number of applications rising by 12 per cent in 2014. Its students have the 9th highest UCAS Points in the UK at 489 points (the equivalent of AAA at A Level and AA at AS Level) in 2014. [37]

The university has grown rapidly, particularly in the last few years. As of December 2014, 15,937 students were studying at the university; of whom 11,439 were undergraduates (full-time and part-time) and 4,498 were postgraduates.[2]

Over 30% of students are international students (those with non-British domicile), reflecting the university's strong international reputation, with the largest number coming from China (including Hong Kong), France, India and Malaysia.[2]

TeamBath is the University of Bath's sporting organisation. The university is host to Team Bath F.C. as well as some of the UK's top Olympic athletes.[38] It has one of the best sports facilities in a United Kingdom university,[39] spread over three main sites: two on the Claverton Down campus, known as the Founder's Hall and Sports Training Village (which also hosts the English Institute of Sport for South West England); and at the Sulis Club, a few miles away in Combe Down.

In 2009, Malaysia signed a memorandum of understanding (MoU) with the University of Bath to enable Malaysian athletes preparing for the 2012 London Olympics to train there. The University of Bath was used to prepare athletes for the London Olympics and other sports events like the 2014 Commonwealth Games, the badminton Super Series and cycling circuits in Europe. It continues to be used as an important venue for elite athletes. 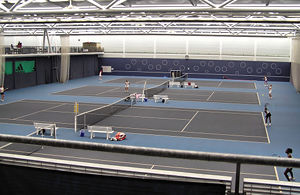 Indoor tennis courts at the university

Facilities at the university include a fitness suite, four squash courts, indoor (110m) and outdoor (400m) athletics tracks, multi-purpose sport halls (including basketball, netball and badminton courts), an eight-court indoor tennis hall, a judo/karate/ju jitsu dojo and centres for sports science and sports medicine.[40] Outdoor synthetic and natural pitches and grounds cater for football, rugby union, field hockey, lacrosse, and American football. A rowing shed on the River Avon for the rowing club was built in 2008. As of late April 2015, a London 2012 Games Legacy 50m swimming pool was installed.

Limited free use of these facilities, with restrictions on times, bookings and frequency of use, can be obtained by students with a membership of the university's sport association.[41] Alternatively, reduced prices are available to students and staff.

The University of Bath Students' Union (formerly BUSU, now Bath SU) has been recognised by the NUS as one of the top three in the UK.[42] It runs over 100 clubs and societies including sports clubs, cultural, arts, interest and faith societies. Some notable examples are:

See also: Category:Alumni of the University of Bath 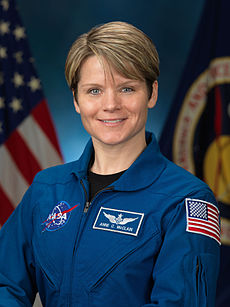 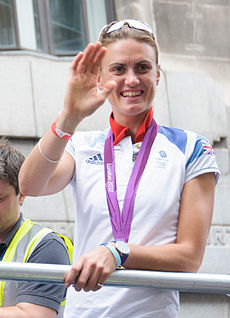