The University of Calcutta (Bengali: কলিকাতা বিশ্ববিদ্যালয়; informally known as Calcutta University or CU) is a public state university located in Kolkata (formerly Calcutta), West Bengal, India established on 24 January 1857.[3] It was the first institution in Asia to be established as a multidisciplinary and secular Western-style university.[citation needed] Within India it is recognized as a "Five-Star University" and a "Centre with Potential for Excellence" by the University Grants Commission and the National Assessment and Accreditation Council.[4][5] There are four Nobel laureates associated with this university: Ronald Ross, Rabindra Nath Tagore, C. V. Raman and Amartya Sen.[6] The university has the highest number of students who have cleared the doctoral entrance eligibility exam in Natural Science & Arts conducted by Government of India's National Eligibility Test to become eligible to pursue research with full scholarship awarded by the Government of India.[7]

The Calcutta University Act came into force on 24 January 1857 and a 41-member Senate was formed as the policy making body of the university. When the university was first established it had a catchment area covering the area from Lahore to Rangoon (now in Myanmar), and Ceylon, the largest of any Indian university.[6]

The first Chancellor and Vice-Chancellor of the Calcutta University were Governor General Lord Canning and Chief Justice of the Supreme Court, Sir James William Colvile, respectively.[12] In 1858, Joddu Nath Bose and Bankim Chandra Chattopadhyay became the first graduates of the university.[13] On 30 January 1858, the Syndicate of the Calcutta University started functioning.[13]

Following its inauguration, many institutions gradually came under its jurisdiction. Kadambini Ganguly and Chandramukhi Basu became the first female graduates of the country in 1882.[13] The Honourable Justice Gooroodas Banerjee became the first Indian Vice-Chancellor of University of Calcutta in the year 1890.[12] Sir Ashutosh Mukherjee was the Vice-Chancellor for four consecutive two-year terms (1906–1914) and a fifth two-year term (1921–23). Four Nobel laureates were associated with this university: Ronald Ross. Rabindra Nath Tagore, C. V. Raman and Amartya Sen.[6]

The current university seal (top of the page) is the modified version of the sixth seal. However the motto Advancement of Learning remained same through it transitions.[14] 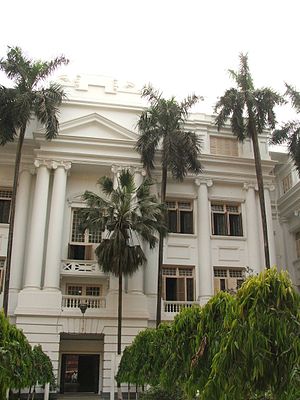 Asutosh Siksha Prangan (commonly called the College Street Campus) is the main campus of the university, where the administrative work is done. Located on College Street, is spread over a small area of 2.7 acres (0.011 km2).[16]

Taraknath Siksha Prangan (also known as University College of Science or commonly Ballygunge Science College) on Ballygunge Circular Road in the southern part of the city houses the departments of agriculture, anthropology, biochemistry, botany, genetics,statistics, zoology, neuroscience, marine science, biotechnology and most notably geology among others.[15]

The university is building a "Campus" which is known as "Technology Campus" or "Tech Campus", to bring together the Three engineering and technical departments(the Departments are Department of Computer Science and Engineering,A.K.C School of Information Technology,Department of Applied Optics & Photonics), in Salt Lake.[17][18]

Undergraduates enroll for a three-year program. Students choose a major when they enter the university, and cannot change it later, unless they opt for the university's professional or self-financed postgraduate programs later. Science and business disciplines are in high demand, largely in the anticipation of better employment prospects. Most programs are organized on an annual basis, though some programs are semester dependent. Most departments offer masters programs of a year or of a couple of years' duration. Research is conducted in specialized institutes as well as individual departments, many of which have doctoral programs. University of Calcutta has the biggest Research Center which started from the 100th Science Congress of India in January, 2013. This Center is known as "Center for Research in Nanosience and Nanotechnology" or "CRNN" in Technology Campus of CU at Salt Lake, West Bengal.[citation needed] The university has 18 research centres, 710 teachers, 3000 non-teaching staff and 11,000 post-graduate students.[1] 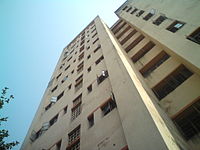 This faculty consists of the departments of business management and commerce.

This faculty consists of three departments that offer courses on education, journalism and mass communication, and library & information science.[22]

This faculty consists of the Department of home science, which offers courses on subjects such as food and nutrition, human development, home science.[24]

This faculty comprises only the department of law. Established in January 1909 as the "University College of Law," it was granted the status as the department of law of the university in February 1996. The Faculty has many lumanries associated with it like Rajendra Prasad, Rashbehari Bose, Chhitaranjan Das to name a few.

The Department of Applied Physics was established in 1925 and is located in Anand Nagar. Studies are also being conducted in instrumentation engineering, electrical engineering, optics, and opto-electronics.

The first university library started functioning in the 1870s. Apart from 39 departmental libraries it has a central library, two campus libraries, and two libraries of the advanced centers spread across the seven campuses. Students of affiliated colleges can also access the central library. The university library has over 1 million books and more than 200,000 bound journals, proceedings, manuscripts, patents etc.[26] This is one of the biggest Institute Libraries in the World.

Most of the affiliated undergraduate colleges located in the city have their own separate student hostels. The university has 17 hostels, of which 8 hostels (2 for UG and 6 for PG) are for girls, and in total 13 hostels are for PG students, which are scattered all over the city.[27] It accommodates around 2000 odd students, which is far less than its student intake.

As of 2012, 136 colleges are affiliated with the university.[2] A large number of colleges and institutes were formerly affiliated to this university, but have left following political transformations, or gradual restructuring.

The university enjoys both national and international repute:

Some of the notable initiatives associated with the university are:

Due to his works on the comparative-historical evolution of legal and political systems, the fourth vice chancellor Sir Henry Maine is widely regarded as a founding figure in the sociology of law

During the tenure of vice-chancellor Sir Asutosh Mookerjee, the university underwent significant expansion
File:Radha Binod Pal Yasukuni 112135010 24372cdf47 o.jpg
Justice Radhabinod Pal, who served as vice-chancellor, went on to be the sole dissenting judge in the International Military Tribunal for the Far East's trials of Japanese war crimes committed during World War II

One of the first female graduates of the university, Kadambini Ganguly was also the first qualified female physician of the British empire

The university has produced many scientists, engineers, world leaders and Nobel laureates and teachers. As the oldest university of Bengal and India, it attracted students from diverse walks of life. Nobel laureates who either studied or worked here include Rabindranath Tagore, Chandrasekhara Venkata Raman, Ronald Ross, and Amartya Sen. The Academy Award winning director Satyajit Ray was an alumnus of this university. So was the composer of the national song of India, Bankim Chandra Chattopadhyay. Some of the industrialists who studied in this university include Sir Rajen Mookerjee, Rama Prasad Goenka, Lakshmi Mittal, and Aditya Birla. Notable scientists and mathematicians associated with the university include Jagadish Chandra Bose, Prafulla Chandra Ray, Meghnad Saha, Anil Kumar Gain, and Satyendra Nath Bose.