Though one of the 10 campuses of the University of California, it is the only UC school dedicated solely to graduate education, and in health and biomedical sciences. Some of UCSF's treatment centers include kidney transplants and liver transplantation, radiology, neurosurgery, neurology, oncology, ophthalmology, gene therapy, women's health, fetal surgery, pediatrics, and internal medicine. With a work force of 22,800 people and annual economic impact of $2 billion, UCSF is San Francisco's second largest employer.

Founded in 1873, the mission of UCSF is to serve as a "public university dedicated to saving lives and improving health." The UCSF Medical Center is consistently[6] ranked among the top 10 hospitals in the United States by U.S. News & World Report,[7] who also ranked UCSF's medical school as one of the top 10 in a number of specialties, including a specialty program in AIDS medical care ranked first in the country.[8]

File:UCSF 1908.jpg
UCSF in 1908, with the streetcar that used to run on Parnassus Avenue

UCSF traces its history to Hugh H. Toland, a South Carolina surgeon who found great success and wealth after moving to San Francisco in 1852.[9] A previous school, the Cooper Medical College of the University of Pacific (founded 1858), entered a period of uncertainty in 1862 when its founder, Elias Samuel Cooper, died.[10] In 1864, Toland founded a new medical school, Toland Medical College, and the faculty of Cooper Medical College chose to suspend operations and join the new school.[10]

The school's first female student, Lucy Wanzer, graduated in 1876, after having to appeal to the UC Board of Regents to gain admission in 1873.[13][14]

UCSF's Beckman Vision Center is also located at the Parnassus campus. It is a center for the diagnosis, treatment and research of all areas of eye care, including vision correction surgery. 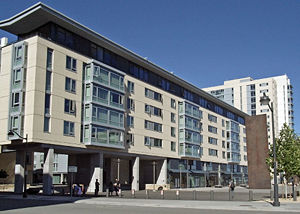 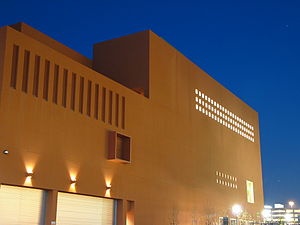 UCSF's Mission Bay Campus, also located in San Francisco, is the largest ongoing biomedical construction project in the world.[15] The 43-acre (17 ha) Mission Bay campus, opened in 2003 with construction still ongoing, contains additional research space and facilities to foster biotechnology and life sciences companies. It will double the size of UCSF's research enterprise over the next 10 years. The biotechnology company Genentech contributed $50 million toward construction of a building as part of a settlement regarding alleged theft of UCSF technology several decades earlier.[16] Also located on the Mission Bay campus, the Arthur and Toni Rembe Rock Hall was designed by César Pelli and opened in February 2004. The building is named in honor of Arthur Rock and his wife, who made a $25 million gift to the university.[17] Byers Hall serves as the headquarters for the California Institute for Quantitative Biosciences (QB3), a cooperative effort between the UC campuses at San Francisco, Berkeley, and Santa Cruz. The building is named after venture capitalist Brook Byers, co-chair of UCSF's capital campaign that concluded in 2005 and raised over $1.6 billion.[18] Additionally, the William J. Rutter Center, designed along with the adjacent 600-space parking structure by Ricardo Legorreta, opened in October 2005 and contains a fitness and recreation center, swimming pools, student services, and conference facilities. The building is named in honor of William J. Rutter, former Chairman of the university's Department of Biochemistry & Biophysics and co-founder of Chiron Corporation.[19] A housing complex for 750 students and postdoctoral fellows and an 800-space parking garage also opened in late 2005. And a fourth research building, designed by Rafael Viñoly and named the Helen Diller Family Cancer Research Building, opened in June 2009. Two additional research buildings designated for neuroscience and cardiovascular research are currently in the planning and design phase.[20] A new specialty hospital focused on women, children, and cancer on the Mission Bay campus opened in February 2015.[21]

Other centers, institutes, and programs

The Mount Zion campus contains UCSF's NCI-designated Comprehensive Cancer Center, its Women's Health Center, the Osher Center for Integrative Medicine and outpatient resources. The San Francisco General Hospital campus cares for the indigent population of San Francisco and contains San Francisco's only Level I trauma center.[22][23] The hospital itself is owned and operated by the city of San Francisco, but many of its doctors carry UCSF affiliation and maintain research laboratories at the hospital campus. The earliest cases of HIV/AIDS were discovered at SF General Hospital in the 1980s.[24] To this day SF General Hospital has one of the world's leading HIV/AIDS treatment and research centers.[25][26]

UCSF is also affiliated with the San Francisco VA Hospital and the J. David Gladstone Institutes, a private biomedical research entity that has recently moved to a new building adjacent to UCSF's Mission Bay campus. They are also affiliated with UCSF Benioff Children's Hospital Oakland (formerly Children's Hospital & Research Center Oakland). The headquarters of the new California Institute for Regenerative Medicine are also located nearby in the Mission Bay neighborhood.

UCSF has its own police department, which serves its two major campuses as well as all satellite sites within the city and South San Francisco.

Among the related Institutes that are part of UCSF is the Philip R. Lee Institute for Health Policy Studies, founded in 1972 by Philip Randolph Lee.[27][28]

UCSF cooperates with the Hastings College of Law, a separate University of California institution located in San Francisco. This including the formation of the UCSF/Hastings Consortium on Law, Science, and Health Policy.[29] The program offers an LLM and MSL Degree program for health and science professionals. The Philip R. Lee Institute for Health Policy Studies is a partner in this consortium.

University of California, San Francisco is unique among University of California campuses in that it performs only biomedical and patient-centered research in its Schools of Medicine, Pharmacy, Nursing, and Dentistry, and the Graduate Division, and their hundreds of associated laboratories. The university is known for innovation in medical research, public service, and patient care. UCSF's faculty includes five Nobel Prize winners, 31 members of the National Academy of Sciences, 69 members of the Institute of Medicine, and 30 members of the Academy of Arts and Sciences. UCSF confers a number of degrees, including Master of Science, Doctor of Philosophy, Doctor of Pharmacy, Doctor of Medicine, Doctor of Dental Surgery, and Doctor of Physical Therapy in a variety of fields.

In 2012, the Academic Ranking of World Universities, published annually by Shanghai Jiaotong University, ranked UCSF 2nd in the world for Clinical Medicine and Pharmacy and third in the world for Life and Agricultural Sciences.[5] The professional schools of the University of California, San Francisco are among the top in the nation, according to current (2013) US News and World Report graduate school and other rankings. The schools also rank at or near the top in research funding from the National Institutes of Health. In addition, the UCSF Medical Center in 2013 was ranked by U.S. News & World Report the 7th-best hospital in the nation,[30] making it the highest-ranked medical center in northern California. 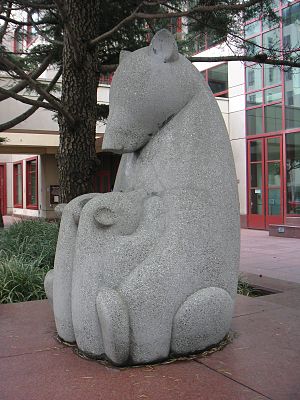 In 2015, the School of Medicine ranked third overall among research-based medical schools by U.S. News & World Report.[31] In rankings of medical schools for primary care, UCSF also ranked 3rd.[31] It is the only school in the nation to be in the top 10 for both research and primary care. In addition, UCSF is nationally ranked as #1 in AIDS, #2 in Internal Medicine, Women's Health, and Drug and Alcohol Abuse, #4 in Family Medicine, #6 in Geriatrics, and #7 in Pediatrics.[31]

In 2011, the School of Medicine was the second-largest recipient of National Institutes of Health research funds among all US medical schools, and the first among all public medical schools, receiving awards totaling $532.8 million.[32] This figure rose from 2010 when the School of Medicine received a total of $475.4 million in NIH funds, but was still the largest public medical school recipient.[33] Also in 2012, the school of medicine received the most funding from NIH in medicine for the first time, receiving funds totaling $448.7 million.[34]

The School of Nursing in 2014 ranked first nationally in total NIH research funds with $10.1 million. This was the second year in a row that all four of UCSF's professional schools (Medicine, Nursing, Pharmacy, and Dentistry) ranked first for "federal biomedical research funding in their fields." [35]

In 2012, U.S. News & World Report ranked the UCSF School of Pharmacy number one in its "America's Best Graduate Schools" edition.[31] In 2014, the School of Pharmacy also ranked first in NIH research funding among all US pharmacy schools, receiving awards totaling $31.8 million.[35]

The UCSF School of Pharmacy was also ranked as the top program in the US, according to a 2002 survey published in The Annals of Pharmacotherapy, which weighed key criteria, including funding for research and the frequency of scientific publications by faculty, that are not considered in other rankings.

In 2013, the UCSF pharmacy program implemented the multiple mini interview, developed by McMaster University Medical School, as a replacement for the more traditional panel interview as the MMI had shown to be a better predictor of subsequent performance in school.

The School of Dentistry in 2014 ranked first among all dental schools in NIH research funding. It received awards totaling $15.5 million from the NIH.[35]

In Quacquarelli Symonds's first ever Dentistry Subject Ranking in 2015, UCSF was ranked 24th in the world.[36]

In 2011, U.S. News & World Report named the UCSF Medical Center the seventh-best hospital in the nation, making it the highest-ranked medical center in Northern California. Among pediatric care centers, UCSF Children's Hospital ranked no. 16 – among the highest-rated children's medical service in California.

UCSF Radiology research programs were ranked second in 2009 in America. The Radiology department is spearheaded by Dr Ronald L. Arenson who is an Alexander R. Margulis Distinguished Professor and also a part of Board of directors of RSNA (Radiological Society of North America).

In 2005, UCSF agreed to pay $92,500 in fines in a settlement between the University and the USDA for Animal Welfare Act (AWA) violations in campus laboratories. UCSF was cited for 59 AWA violations including for failure to treat a monkey who was visibility sick and for failing to provide painkillers to animals after invasive surgeries.[40]

According to a 2012 investigation by the San Francisco Chronicle, in the years following the University’s settlement “incidents of animal neglect or mistreatment have persisted.” In their investigation, the Chronicle claims “Mice at UCSF had toes removed without anesthesia. Several animals, including birds and a squirrel monkey, received little or no pain medication after surgical procedures.” They also claim mice and primates went for long periods without food or water and that “a rhesus monkey remained in a brain study despite chronic and painful complications.”[41]

In response to the investigation, the University said it “takes very seriously the care and use of the animals it studies” and that "every proposed study undergoes rigorous review." [42]

The center itself has been the first in major institutional developments: