From Infogalactic: the planetary knowledge core
Jump to: navigation, search
File:Catane Université.jpg
Detail of the University of Catania, aside the San Nicolò Church

Following the Italian Higher Education reform introduced by the law 240/10 and adopted by the University of Catania in its new Statute, Faculties have been disactivated and Departments have been reorganized. The University of Catania has now 23 Departments[1] that, additionally to the traditional assignments of scientific research, are in charge of the organization and management of educational activities. 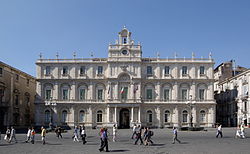 The Palazzo dell'Università, seat of the University.

The university was founded by King Alfonso V of Aragon (who was also King Alfonso I of Sicily) on 19 October 1434. A charter was granted after two royal councillors (Adamo Asmundo and Battista Platamone) convinced the king to accept the founding of a "Studium Generale" in Catania, with the papal recognition arriving ten years later from Pope Eugene IV (18 April 1444). Alfonso V with this gesture wanted to compensate the city (in which there had been recently established the Royal Court) for moving the Sicilian capital from Catania to Palermo. The activity of the Atheneum actually started a year later, in 1445, with 6 professors and 10 students. The first four faculties were Medicine, Philosophy, Canon and Civil Law and Theology. Lessons were initially held in a building in Piazza del Duomo, next to the Cathedral of St. Agatha, and eventually moved to the Palazzo dell'Università in the late 1690s. This building remains the seat of the university to this day. The first degree was awarded to Antonio Mantello, from Syracuse, in 1449. During the course of the 16th century, approximately 20-25 degrees were awarded each year. The University (which from the 16th century was referred to as "Siculorum Gymnasium") was named "Studium Generale" because it was the only entity that could release degrees equal to those released in the old Studia of Salamanca, Valladolid, Bologna and this contributed to spread envy in the other Sicilian cities that in culture and traditions didn't feel inferior to Catania. In 1934, the university celebrated its 500th anniversary with King Vittorio Emanuele III of Italy, and, in 1984 the 550th one.

In the early centuries of its existence, the university was administered by the comune (municipality) of Catania, overseen by the bishop of Catania and protected by the royal power. But with a reform operated by the viceroy in 1679 the authority of the bishop (who was "Gran Cancelliere" = "Great Chancellor") prevailed: he had the control over the lecturers, the freshmen and students' curriculum. This led to various conflicts between the civil and religious authorities. From 1818 the office of Gran Cancelliere was assigned to the President of the Great Civil Court, instead of the bishop.