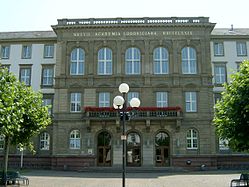 The University of Giessen, officially called the Justus Liebig University Giessen[1] (German: Justus-Liebig-Universität Gießen), is a large public research university in Giessen, Hesse, Germany. It is named after its most famous faculty member, Justus von Liebig, the founder of modern agricultural chemistry and inventor of artificial fertiliser. It covers the areas of arts/humanities, business, dentistry, economics, law, medicine, science, social sciences, and veterinary medicine. Its university hospital, which has two sites, Gießen and Marburg (the latter of which is the teaching hospital of the University of Marburg), is the only private university hospital in Germany.

The University of Gießen is among the oldest institutions of higher educations in the German-speaking world. It was founded in 1607 as a Lutheran university in the city of Gießen in Hesse-Darmstadt because the all-Hessian Landesuniversität (the nearby University of Marburg (Philipps-Universität Marburg) in Marburg, Hesse-Kassel (or Hesse-Cassel)) had become Reformed (that is, Calvinist). Louis V, Landgrave of Hesse-Darmstadt, whence the university got its original name "Ludoviciana," founded his own institution of higher education in Giessen, which as a Lutheran institution had the primary function of ensuring the education of pastors and civil servants. Endowed with a charter issued by Rudolf II, Holy Roman Emperor, on May 19, 1607, the university was allowed to proceed with instruction in October 1607. During the Thirty Years' War, when Hesse-Darmstadt was able to take the area around Marburg for itself, the university in Giessen ceased instruction and was moved back to its more long-standing location in Marburg (1624/25). The Peace of Westphalia led to the restoration of the old location and in 1650 to the relocation of the university to Giessen.

In the 17th and 18th centuries the Ludoviciana was a typical small state university that then had the four common faculties (theology, law, medicine, and philosophy). The instruction was reasonable, with about 20 to 25 professors teaching several hundred students, the latter of which were mostly "Landeskinder." In the 18th century came gradual modernization of the curricula and reforms in the instruction, which were definitively influenced by the local lordly court in Darmstadt. The example for the reforms were both of the "model universities of the Enlightenment," the University of Halle, founded in 1694, and more still Georgia Augusta, founded in Göttingen in 1734/37. Indeed, all attempts at reform were from the start limited by the limited finances of Hesse-Darmstadt.

The noteworthy creation of a Faculty of Economics (1777–1785) was ultimately was born out of this financial hardship. In the Faculty of Economics, new practical subjects were brought together (veterinary medicine, forestry, and cameral sciences), which the university was supposed to make "expedient" and "profitable." (One of the earliest courses of study in forestry in Europe.) After finishing studies in this Faculty, a number of these youths were able to gain recognition in the Faculties of Medicine and Philosophy. They established the unusually diverse course offerings that continue to exist to the modern day at the University of Gießen.

The University of Giessen weathered the transition from the 18th to the 19th century unscathed and was still the only university of an enlarged territory, the Grand Duchy of Hesse. Alongside Jena, Giessen was the prototype for the politicized Vormärz university, and the "Gießener Schwarzen" with Karl Follen and Georg Büchner, marked the revolutionary spirit of this decade. With the appointment of the 21-year-old Justus von Liebig in 1824 through the Grand Duchy — against the will of the university on the recommendation of Alexander von Humboldt — a new era in the natural sciences began, not only in Giessen. Young, promising scientists created a new impulse in their respective areas of knowledge; among these scientists were the antiquarian Friedrich Gottlieb Welcker, the lawyer Rudolf von Jhering, the theologian Adolf von Harnack, and the physicist Wilhelm Conrad Röntgen.

At the turn of the 20th century, the Ludoviciana began to expand into a modern university. During this period, new clinics in human and veterinary medicine were established, and the university library received its first proper building. With the creation of the university's central building (inaugurated 1880) and the adjacent newly constructed facilities for chemistry and physics a new cultural center was established on what was then the border of the city. The decisive backer of this project was the last Grand Duke Ernst Ludwig, to whom the university bestowed out of thankfulness the honorary title of "Rector Magnificentissimus." In 1902 the student body surpassed one thousand. For the first time included in the student body were women, who since 1900 were admitted as guest students and starting in 1908 were admitted for regular study.

After the different Hessian states were (re-)united in 1929, both universities became public universities of that German state. The University of Giessen now has almost 23,000 students and 8,500 employees, which together with the University of Applied Sciences Giessen-Friedberg, makes Giessen the most student-dominated German city.

Growth in the student population

In the 2011 winter semester the student population exceeded the mark of more than a total of 25,000 students and 6,000 first-semester students for the first time.

Although the university has no defined campus, buildings and facilities are grouped together according to their subject areas and situated in various locations around Gießen. Philosophikum II, for example is an area on the outskirts of the city bordering the city forest. A number of faculty buildings and lecture theaters are located there, including Audimax, a building containing several lecture halls whose atrium is often the venue for concerts and disco-nights, locally known as "Uni-Partys."

Next to Liebig, famous professors at the university included the physician Georg Haas (who carried out the world's first human hemodialysis in Giessen in 1924), the theologian Adolf von Harnack, the lawyer Rudolf von Jhering, the economist and statistician Etienne Laspeyres, the physicist Wilhelm Conrad Röntgen, the mathematicians Moritz Pasch and Alfred Clebsch, the gestalt psychologist Kurt Koffka, the philologist and archaeologist Friedrich Gottlieb Welcker, and the orientalist Eberhard Schrader.

Recent alumni in the area of politics include current German Minister for Foreign Affairs and former Vice Chancellor Frank-Walter Steinmeier and Brigitte Zypries, current Parliamentary State Secretary at the Federal Ministry for Economic Affairs and Energy and former Federal Minister of Justice of Germany from 2002 to 2009.

All of the most famous alumni of the university were born in Hesse-Darmstadt.[citation needed] They include the German romantic dramatist and revolutionary Georg Büchner, the literary and political historian Georg Gottfried Gervinus and the botanist Johann Jacob Dillenius. Also Ernest Rutherford, the Rutherford's atomic model creator, studied in Giessen. Alumnus William Schlich founded Oxford University's forestry program. Carl A. Schenck, who received his PhD in Forestry from Giessen, founded Biltmore Forest School, the first such school in the United States.

The Holocaust Literature Research Unit of the university plans to publish My Opposition, Friedrich Kellner's World War II diary.[citation needed] Friedrich Kellner was chief justice inspector in Laubach from 1933 to 1950 and also district auditor for the region of Gießen.