The University of Hartford (UHart) is a private, independent, nonsectarian, coeducational university located in West Hartford, Connecticut. Its 350-acre (1.4 km2) main campus touches portions of three municipalities: Bloomfield, Hartford, and West Hartford. The university attracts students from 48 states and 43 countries. The degree programs at the University of Hartford hold the highest levels of accreditation available in the US, including the Engineering Accreditation Commission of the Accreditation Board for Engineering and Technology (EAC/ABET), the Association to Advance Collegiate Schools of Business (AACSB), and the New England Association of Schools and Colleges-Commission on Institutions of Higher Education (NEASC-CIHE).[8][9]

The Hartford Art School, which commenced operation in 1877, was founded by a group of women in Hartford, including Harriet Beecher Stowe and Mark Twain's wife, Olivia Langdon Clemens, as the Hartford Society for Decorative Art. Its original location was at the Wadsworth Atheneum, the first public art museum in the United States. It is still associated with the museum today.

Hillyer College, which was named for the U.S. Civil War General Charles Hillyer, was created as a part of the Hartford YMCA in 1879. It originally provided instruction in automotive technology at a time when Hartford was a center for the infant automobile industry. In 1947, it was formally separated from the YMCA and was the educational home to large numbers of World War II veterans who were afforded an education under the G.I. Bill. After the 1957 merger of the three schools, from the original Hillyer College, came the College of Education, Nursing and Health Professions, Barney School of Business, College of Engineering, Technology and Architecture, College of Arts and Sciences, and the contemporary Hillyer College, formerly known as the College of Basic Studies.

The Hartt School, which was founded in 1920 by Julius Hartt and Moshe Paranov, is among the most recognized schools for music, dance, and theatre in the United States.

The university's athletic programs are the Hawks, and most teams play in the America East Conference. Following the 1983–1984 school year, the university elevated its athletics program to Division I status, the highest level of intercollegiate competition.

Since 1988, the university has been a lead institution for the Connecticut Space Grant College Consortium.

In the 1990s, pledging its commitment to women's education, the university bought the financially struggling Hartford College for Women (HCW). Since the university itself was in a difficult financial position, several years later HCW was closed.

Although it is a private institution, the university hosts two magnet schools that serve students from Hartford and its surrounding suburbs: University of Hartford Magnet School (serving grades K-5) and University High School of Science and Engineering (serving grades 9–12).

In the summer of 2008, the bridge over the Park River, connecting the academic and residential sides of campus, was rebuilt.

The acceptance rate to the University of Hartford in the fall of 2012 was 41% for all new full-time freshman, transfers, re-admits, and fresh starts. Of the admitted students, the majority attend the College of Arts and Sciences.[10]

The University of Hartford has more than 6,000 full-time and part-time graduate and undergraduate students. The university offers 82 bachelor's degree programs, 10 associate degrees, 28 graduate degrees, and 7 certificates or diplomas. The student-faculty ratio is nearly 14:1.[11] The departments in each of the seven schools are listed below.[12] 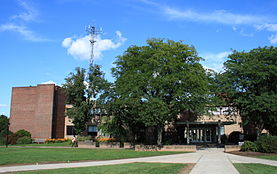 This houses the student government, the university post office, student organizations including the student newspaper The Informer and the Student Television Network (STN), a cafeteria, a convenience store, and the Gengras food court, featuring Einstein Bros. Bagels, Burger Studio, and Extreme Pita.

Centrally located on campus, the Harry Jack Gray Center houses the Mortensen Library and the Allen Memorial Library. Also located here are the Joseloff Gallery, the university bookstore, the School of Communications, the Visual Communication Design Department, the Department of Architecture, WWUH (91.3 MHz FM) radio station, the Gray Conference Center, the Museum of Jewish Civilization, and the 1877 Club restaurant. It was the former home of the Museum of American Political Life, which housed the second largest collection of political memorabilia in the United States after the Smithsonian. The museum was closed in 2003 and that space now houses the Department of Architecture.

The main Hartt School Complex, the center is composed of Millard Auditorium, Paranov Hall, and O'Connell Hall, a one-story extension of Paronov Hall. Originally Abrahms Hall was included in the Fuller Complex.

Named for businesswoman Beatrice Fox Auerbach and one of the largest academic buildings, it is home to the Barney School of Business as well as the Maurice Greenberg Center for Judaic Studies.

This houses Hillyer College, the Auerbach Auditorium, the Esphyr Slobodkina Urquhart Children's Reading Room, and most classes in the College of Arts and Sciences.

This complex houses the College of Engineering, Technology, and Architecture, also known as CETA. It consists of three buildings: United Technologies Hall, Charles A. Dana Hall (the largest building of the complex), and a 37,000 sq ft (3,400 m2) building housing biology and chemistry facilities.

This is a public magnet elementary school located on the University of Hartford campus. Many education majors complete fieldwork, practicum, and student teaching here.

This public magnet high school, formerly located on the University's Albany Avenue campus, is now located on the east side of the campus. The University High School was established in 2004 as a partnership of the Hartford Public Schools, the University of Hartford, and the Capitol Region Education Council. It is based on the early college initiative mode: University High School students are able to earn college credits while they attend high school. The high school enrolls two hundred students, seventy percent of whom are from Hartford. The other thirty percent come from towns in central Connecticut. Students are selected through a lottery from a pool of applicants, as required by the state of Connecticut. 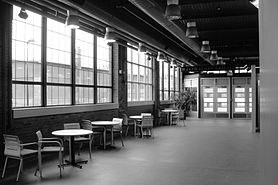 The performing arts center is located at the corner of Albany Avenue and Westbourne Parkway in Hartford. This 55,000-square-foot (5,100 m2) facility is the instructional home for collegiate and Community Division students studying Theatre, Music Theater and Dance at the Hartt School. The center was completed and dedicated in 2008. It contains five dance studios, four theatre rehearsal studios, three vocal studios, and two black box theatres, as well as faculty offices, community room, bank, and cafe. 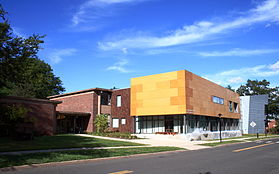 A residential dining hall, it is in the center of the freshmen living area. Located on the ground floor is the Hawk's Nest, which offers food, pool, and several large-screen TVs. The Hawk's Nest hosts Friday-night music performances, which include local and national acts as well as student performances. A $10 million renovation of The Commons commenced in May 2014 and completed that following September. The new facility includes a sushi station, salad and soup bar, stir fry station, and a sandwich section.

There are four different styles of on-campus housing. All provide students with access to the university's T-3 broadband internet network, cable television, and telephones.

This includes a market, Subway, and an indoor eating area.

Located 2 miles (3 km) west of downtown Hartford and once home to the Hartford College for Women, it now includes academic classrooms and graduate student campus housing in fourteen townhouses and Johnson House. It contains a cafeteria, computer lab, and studio space.

The College of Engineering at the University of Hartford offers two unique ways to incorporate acoustics into an undergraduate engineering degree program; both are fully accredited by the Accreditation Board for Engineering and Technology:

Such groups at the University of Hartford are governed by the A Cappella Coalition and hold auditions at the beginning of each year for new members.

Music for a Change

The school's football team does not compete in the NCAA, instead playing at the club level in the Yankee Collegiate Football Conference.

WWUH operates as a community service of the University of Hartford with an all-volunteer staff of university alumni, faculty, and staff, as well as members of the community. Operating live 24/7 for the last 30 years, WWUH came on the air on July 15, 1968, as the first stereo public station in the state. WWUH, also known as "UH-FM", offers both music and spoken-word programming that is an alternative to what is heard on other area stations. The station has won the Best Radio Station and Best College Station category in a local newspaper readers' poll numerous times in the last 20 years. WWUH welcomes student volunteers and offers a comprehensive on-air and leadership training program. WWUH's programming can also be heard on WAPJ, 89.9 in Torrington, Connecticut; WDJW, 89.7 in Somers, Connecticut; and WWEB, 89.9 in Wallingford, Connecticut, and on the web at wwuh.org.

Founded on February 2, 1974, WSAM is the university's student-run radio station that operates year-round. The station is found online at the WSAM Website, on the air on-campus only at 105.3FM, or on campus TV channel 5.

The Student Television Network is a completely student-run station that broadcasts on channel 2 of the university's cable system. STN started its weekly news program broadcast, "STN Channel 2 News," on February 9, 1993. Currently, new broadcasts are live every Friday at 5 p.m. and recorded to then be played throughout the week at 2, 5, 8, and 11 a.m. and p.m. In addition to weekly news broadcasts, STN produces and broadcasts several live Hartford Hawks sports productions throughout the year, and hosts a number of other student-created programs, such as "22 on 2," an entertainment news show, "Foul Mouths," a sports talk show, and "A Ghostly Addiction," a horror thriller show.[18]