University of Hawaii at Manoa

From Infogalactic: the planetary knowledge core
Jump to: navigation, search
File:Stone marking the entrance to University of Hawaiʻi at Mānoa.jpg
Entrance to UH Mānoa Campus

The University of Hawaiʻi at Mānoa was founded in 1907 as a land grant college of agriculture and mechanical arts. A bill by Maui Representative William Coelho introduced March 1, 1907 and signed into law March 23 enabled construction to begin. In 1912 it was renamed the College of Hawaii and moved to its present location. William Kwai Fong Yap petitioned the territorial legislature six years later for university status which led to another renaming to the University of Hawaii in 1920. This is also the founding year of the College of Arts and Sciences. In 1931 the Territorial Normal and Training School was absorbed into the university. It is now the College of Education. 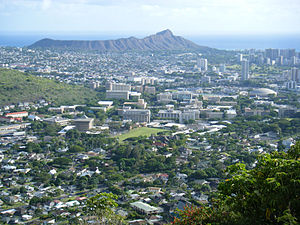 UH Mānoa campus viewed from Round Top Drive, with Diamond Head in the background

Today, the primary facet of the University consists of the four Colleges of Arts and Sciences: Arts and Humanities, Languages Literatures and Linguistics, Natural Sciences, and Social Sciences. The college of agriculture and mechanical arts is now the College of Tropical Agriculture and Human Resources (CTAHR), one of the few agricultural colleges in the United States focused on tropical research. The University of Hawaiʻi at Mānoa is also home to two of the most prominent professional schools in the state. The William S. Richardson School of Law and the John A. Burns School of Medicine are the only law and medical schools in Hawaiʻi, respectively. It is also home to the Shidler College of Business which has the only AACSB accredited graduate business program in the state.The Center for Hawaiian Studies provides 'excellence in the pursuit of knowledge concerning the Native people of Hawaii.[7] 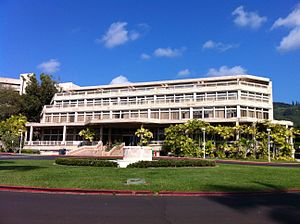 With extramural grants and contracts of $436 million in 2012, UH-Mānoa exploded in terms of research related to Hawaii's physical landscape, its people, and their heritage. The landscape facilitates advances in marine biology, oceanography, underwater robotic technology, astronomy, geology and geophysics, agriculture, aquaculture and tropical medicine. Its heritage, the people and its close ties to the Asian and Pacific region create a favorable environment for study and research in the arts, genetics, intercultural relations, linguistics, religion and philosophy.[8]

The $150-million medical complex in the area of Kaka‘ako opened in the spring of 2005. The facility houses a state-of-the-art biomedical research and education center that attracts significant federal funding and private sector investment in biotechnology and cancer research and development.

UH Mānoa is characterized by a wealth and variety of research projects. Research broadly conceived, is expected of every faculty member at UH Mānoa. Also, according to the Carnegie Foundation, UH Mānoa is an RU/VH (very high research activity) level research university.[12]

In 2013, UH Mānoa was elected to membership in the Association of Pacific Rim Universities, the leading consortium of research universities for the region. APRU represents 45 premier research universities—with a collective 2 million students and 120,000 faculty members—from 16 economies in the most dynamic and diverse region of the world.[13] 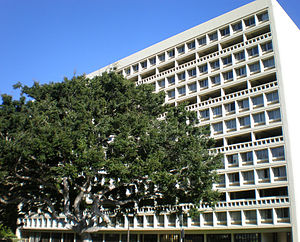 The university reserves some low rise units for graduate students and families.[15] 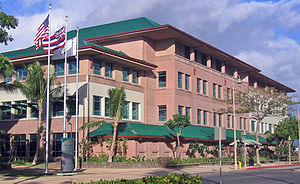 The Research Building at the John A Burns School of Medicine

The University of Hawaii at Manoa Library, which provides access to 3.4 million volumes, 50,000 journals, and thousands of digitized documents, is one of the largest academic research libraries in the United States, ranking 86th in parent institution investment among 113 North American members of the Association of Research Libraries.[17]

For 2016, UH Mānoa was ranked tied for 161st among national universities and tied for 88th among public universities in the U.S. by U.S. News & World Report.[25] In graduate school rankings for 2016, U.S. News & World Report ranked the School of Medicine tied for 19th in the country for primary care, the College of Education 76th, the Law School tied for 82nd, the School of Nursing tied for 83rd, the College of Engineering tied for 140th, with the Shidler College of Business' part-time MBA program ranked 140th in the nation. [25]

The University offers over 50 distance learning courses, using technology to replace either all or a portion of class instruction. Students interact with their instructors and peers from different locations to further develop their education.[26] 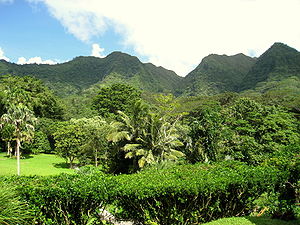 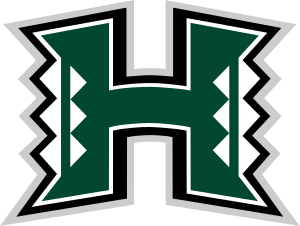 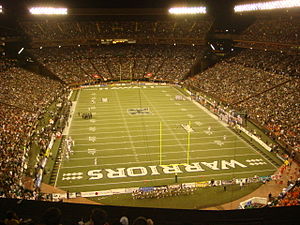 The off-campus Aloha Stadium, situated near Pearl Harbor in Honolulu has been the home of Rainbow Warrior Football since 1975. 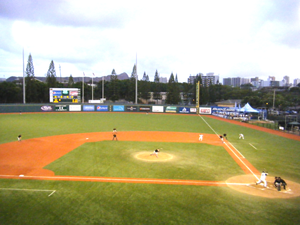 Men’s teams are known as Rainbow Warriors, and women’s teams are called Rainbow Wahine. They are most notable for men's and women's basketball, volleyball, baseball and football programs. The University won the 2004 Intercollegiate Sailing Association National Championships. The women's volleyball program won NCAA championships in 1982, 1983 and 1987. The men's volleyball won an NCAA championship in 2002, but it was later vacated due to violations.

From 1986 to 2001, the President of the University of Hawaiʻi system also served as the Mānoa campus's chancellor. In 2001, the position of Chancellor was recreated by then-UH president Evan Dobelle over conflict of interest concerns.

In 2010, the university received criticism over its data policies after several high-profile data breaches.[30] In 1999, there was controversy within the Mānoa campus dealing with the accreditation of the School of Public Health.[31]

These artworks are off the main campus: