The University of Innsbruck (German: Leopold-Franzens-Universität Innsbruck; Latin: Universitas Leopoldino Franciscea) is a public university in Innsbruck, the capital of the Austrian federal state of Tyrol, founded in 1669.

It is currently the largest education facility in the Austrian Bundesland of Tirol, the third largest in Austria behind Vienna University and the University of Graz and according to The Times Higher Education Supplement World Ranking 2010 Austria's leading university. Significant contributions have been made in many branches, most of all in the physics department. Further, regarding the number of Web of Science-listed publications, it occupies the third rank worldwide in the area of mountain research.[1]

In 1562, a Jesuit grammar school was established in Innsbruck, today "Akademisches Gymnasium Innsbruck". It was financed by the salt mines in Hall in Tirol and was founded as a university in 1669 by Leopold I with four faculties. In 1782 this was reduced to a mere lyceum (as were all other Universities in the Austrian Empire, apart from Prague, Vienna and Lviv), but it was re-established as the University of Innsbruck in 1826 by Emperor Franz I. The university is therefore named after both of its founding fathers with the official title of: "Leopold-Franzens-Universität Innsbruck" (Universitas Leopoldino-Franciscea).

In 1991, Lauda Air Flight 004 crashed in Thailand, killing all on board, including 21 members of the University of Innsbruck. The passengers included professor and economist Clemens August Andreae, another professor, six assistants, and 13 students. Andreae had often led field visits to Hong Kong.[2] 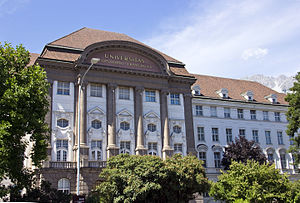 Main building of the University of Innsbruck

In 2005, copies of letters written by the emperors Frederick II and Conrad IV were found in the university's library. They arrived in Innsbruck in the 18th century, having left the charterhouse Allerengelberg in Schnals due to its abolishment. 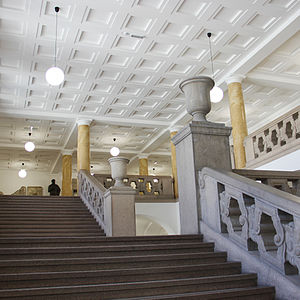 In the main building of the University of Innsbruck

1998 copy of Olomouc University Rector's Mace - the original from ca. 1572 is as of 2015 still held by the Innsbruck University

Since the establishment of Czechoslovakia in 1918, the Czechs have been unsuccessfully requesting the return of the University of Olomouc's original ceremonial equipment. Many years later, in 1998, Innsbruck donated an exact copy of the Rector's Mace to Palacký University, but it is still, in 2015, using the Olomouc University original maces and other regalia as its own ceremonial equipment.[3]

The new plan of organisation (having become effective on October 1, 2004) installed the following 15 faculties to replace the previously existing six faculties:

As of 1 January 2004, the Faculty of Medicine was sectioned off from the main university to become a university in its own right. This is now called the Innsbruck Medical University (Medizinische Universität Innsbruck).

The university buildings are spread across the city and there is no university campus as such. The most important locations are:

He was widely respected for his research on hemoglobin and chlorophyll, and on the synthesis of haemin. He also succeeded in explaining the constitution of chlorophyll. Fischer held chairs in Innsbruck (1916-18), Vienna (1918-21) and Munich (1921-1945). He won the Nobel Prize for Chemistry in 1930.

After studying in Graz he worked under Franz Exner at the Department of Physics in Vienna, becoming a Dozent in 1910 and an assistant at the new Institute of Radium Research. The discovery of cosmic radiation is particularly associated with him. Hess was appoined to Graz in 1920 and in 1931 to Innsbruck. In 1937 he returned to Graz but was forced to emigrate in 1938. He obtained a professorship at Fordham University in New York. He won the Nobel prize for Physics in 1936.

He won the Nobel Prize in Chemistry in 1923 for making important contributions to quantitative organic microanalysis, one of which was the improvement of the combustion train technique for elemental analysis. From 1913 on he was professor of Medical Chemistry in Innsbruck for three years.

He won a Nobel Prize in Chemistry in 1928 for his work on sterols and their relation to vitamins. He was at the University of Innsbruck from 1916 till 1918 at the Institute of Medical Chemistry.

Victims of political persecution and terror