The University of L'Aquila (Italian: Università degli Studi dell'Aquila) is a public research university located in L'Aquila, central Italy. It was founded in 1964 (its history begins in 1596) and is organized in nine departments. The university presents a scientific-technological character with many research groups. Its faculties occupy a high position among the Italian universities[citation needed]. It is best known for its Engineering, Medicine, Psychology and Science schools.

On 11 October 1458 and again on 9 May 1464, the city of L'Aquila petitioned King Ferdinand of Aragon to open a Studium equivalent to those in Bologna, Siena and Perugia. Shortly before, the town had withdrawn support for the last of the Angevin and surrendered to the Spanish sovereign. The King granted this request, but there is no documentary evidence to suggest that the city authorities opened the Studium. On the other hand, records do show that both before and after the date of the petition, citizens of L'Aquila (Fra' Giovanni da Capestrano, for example, and Berardino di Ludovico, nephew to the chronicler Francesco d'Angeluccio di Bazzano, who took a degree in 1474) went to study civil and canon law at the Studium in Perugia. During the last years of the late 16th century, from 1596 on, the Jesuits were providing higher instruction at their college in L'Aquila. When, by a decree of 1767, the Jesuits were expelled from the Kingdom, the Aquilanum Collegium became the Collegio Reale. To the chairs of theology, philosophy and history, mathematics, literature and Greek were added, in 1785, those of sciences such as chemistry, anatomy and the theory and practice of medicine, and in 1792 surgery and midwifery. But when, by the decree of 30 May 1807, Joseph Napoleon reorganized all the Royal Colleges, he suppressed the one in L'Aquila and opened one at the Abbey of the Holy Spirit of Morrone, near Sulmona.

Seven years later, on 21 August 1814, a school of higher instruction for the whole Abruzzi area, with university level teaching in medicine, was inaugurated in L'Aquila by Joachim Murat, Napoleon's brother-in-law and king of Naples. Immediately after the Restoration, by a decree on 14 January 1817, King Ferdinand settled that in L'Aquila, as in Bari, Salerno and Catanzaro, a Reale Liceo be opened, teaching law, anatomy and physiology, surgery and midwifery, chemistry and pharmaceutical studies as well as forensic medicine and various scientific subjects. By a decree of 3 December 1874, the students of the L'Aquila Reale Liceo were recognised as qualified to practise pharmacy, surgery and land-surveying, but degrees were conferred by the University of Naples, upon which the Licei were dependent. As a result of this decree, the number of students attending the school in L'Aquila, which in 1861 had become the Scuola Universitaria di Farmacia, Notariato e Chirurgia minore, dropped considerably. 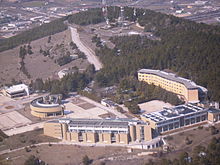 The Faculty of Engineering buildings

In 1923 the "University Schools" ceased to exist. It was not until the summer of 1949 that, due to the efforts of Vincenzo Rivera, professor of agricultural science, fellow of the Accademia Italiana, member of the Costituente and several-time member of Parliament, summer courses at university level were started in L'Aquila mainly for the benefit of Abruzzi students enrolled at the University of Rome. The success enjoyed by these courses formed the foundation for a free University of L'Aquila, and, thanks to support from local bodies, on 15 December 1952 teaching was inaugurated at the Istituto Universitario di Magistero. It was also thanks to Rivera that an astronomical observatory was established at Campo Imperatore on the Gran Sasso, at 2200 m above sea level, as well as the observatory and high altitude botanical gardens, the geo-dynamics observatory, the national magnetism observatory and the museum of paleontology.

Consequences of the 2009 earthquake

The University was badly affected the 2009 L'Aquila earthquake, with fifty-five students killed and only two buildings on the university's two out-of-town campuses remaining structurally sound. The new academic year has found the university inside a full program of recostruction. The university has rent new buildings for the faculties who lost their campuses during the earthquake, a new student residence has been created, many services has been given to the students and the program of recostruction of the damaged university buildings has started.[1]

These are the 9 departments in which the university is divided into: