From Infogalactic: the planetary knowledge core
(Redirected from University of Munich)
Jump to: navigation, search

The University of Munich has, particularly since the 19th century, been considered as one of Germany's as well as one of Europe's most prestigious universities; with 34 Nobel laureates associated with the university, it ranks 13th worldwide by number of Nobel laureates. Among these were Wilhelm Röntgen, Max Planck, Werner Heisenberg, Otto Hahn and Thomas Mann. Pope Benedict XVI was also a student and professor at the university. The LMU has recently been conferred the title of "elite university" under the German Universities Excellence Initiative. 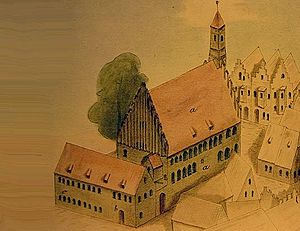 The university was founded with papal approval in 1472 as the University of Ingolstadt (foundation right of Louis IX the Rich), with faculties of philosophy, medicine, jurisprudence and theology. Its first rector was Christopher Mendel of Steinfels, who later became bishop of Chiemsee.

In the period of German humanism, the university's academics included names such as Conrad Celtes and Petrus Apianus. The theologian Johann Eck also taught at the university. From 1549 to 1773, the university was influenced by the Jesuits and became one of the centres of the Counter-Reformation. The Jesuit Petrus Canisius served as rector of the university.

At the end of the 18th century, the university was influenced by the Enlightenment, which led to a stronger emphasis on natural science. 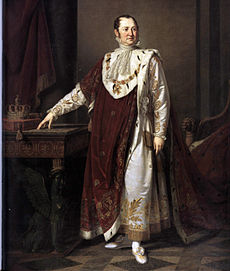 Portrait of Maximilian I Joseph of Bavaria, after whom the University of Munich was renamed in 1802 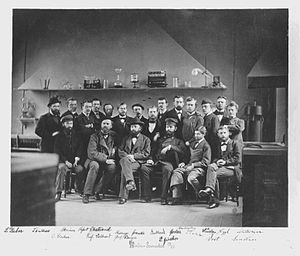 Adolf von Baeyer, Emil Fischer, Jacob Volhard and other chemists at LMU in 1877

In 1800, the Prince-Elector Maximilianv IV Joseph (the later Maximilian I, King of Bavaria) moved the university to Landshut, due to French aggression that threatened Ingolstadt during the Napoleonic Wars. In 1802, the university was renamed the Ludwig Maximilian University in honour of its two founders, Louis IX, Duke of Bavaria and Maximilian I, Elector of Bavaria. The Minister of Education, Maximilian von Montgelas, initiated a number of reforms that sought to modernize the rather conservative and Jesuit-influenced university. In 1826, it was moved to Munich, the capital of the Kingdom of Bavaria. The university was situated in the Old Academy until a new building in the Ludwigstraße was completed. The locals were somewhat critical of the amount of Protestant professors Maximilian and later Ludwig I invited to Munich. They were dubbed the "Nordlichter" (Northern lights) and especially physician Johann Nepomuk von Ringseis was quite angry about them.[4] 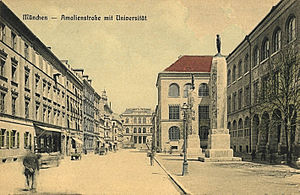 View of the University of Munich from Amalienstrasse around 1900

In the second half of the 19th century, the university rose to great prominence in the European scientific community, attracting many of the world's leading scientists. It was also a period of great expansion. From 1903, women were allowed to study at Bavarian universities, and by 1918, the female proportion of students at LMU had reached 18%. In 1918, Adele Hartmann became the first woman in Germany to earn the Habilitation (higher doctorate), at LMU.

During the Weimar Republic, the university continued to be one of the world's leading universities, with professors such as Wilhelm Röntgen, Wilhelm Wien, Richard Willstätter, Arnold Sommerfeld and Ferdinand Sauerbruch. 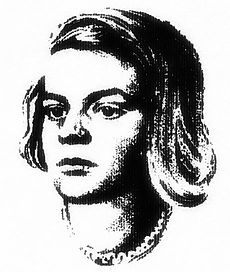 Sophie Scholl, an LMU student and core member of the White Rose group

During the Third Reich, academic freedom was severely curtailed. In 1943 the White Rose group of anti-Nazi students conducted their campaign of opposition to the National Socialists at this university. 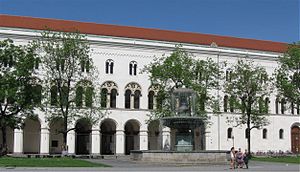 View of the main building of LMU from Ludwigstrasse in 2009 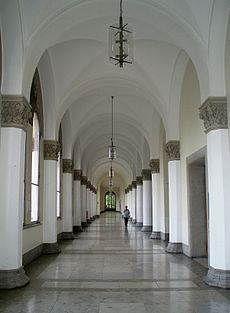 Colonnade in the first floor

The university has continued to be one of the leading universities of West Germany during the Cold War and in the post-reunification era. In the late 1960s, the university was the scene of protests by radical students.

Today the University of Munich is part of 24 Collaborative Research Centers funded by the German Research Foundation (DFG) and is host university of 13 of them. It also hosts 12 DFG Research Training Groups and three international doctorate programs as part of the Elite Network of Bavaria. It attracts an additional 120 million euros per year in outside funding and is intensively involved in national and international funding initiatives.

LMU Munich has a wide range of degree programs, with 150 subjects available in numerous combinations. 15% of the 45,000 students who attend the university come from abroad.

In 2005, Germany’s state and federal governments launched the German Universities Excellence Initiative, a contest among its universities. With a total of 1.9 billion euros, 75 percent of which comes from the federal state, its architects aim to strategically promote top-level research and scholarship. The money is given to more than 30 research universities in Germany.

The initiative will fund three project-oriented areas: graduate schools to promote the next generation of scholars, clusters of excellence to promote cutting-edge research and "future concepts" for the project-based expansion of academic excellence at universities as a whole. In order to qualify for this third area, a university had to have at least one internationally recognized academic center of excellence and a new graduate school.

After the first round of selections, LMU Munich was invited to submit applications for all three funding lines: It entered the competition with proposals for two graduate schools and four clusters of excellence.

On Friday 13 October 2006, a blue-ribbon panel announced the results of the Germany-wide Excellence Initiative for promoting top university research and education. The panel, composed of the German Research Foundation and the German Science Council, has decided that LMU Munich will receive funding for all three areas covered by the Initiative: one graduate school, three "excellence clusters" and general funding for the university’s "future concept". 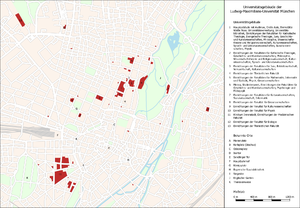 LMU's institutes and research centers are spread throughout Munich 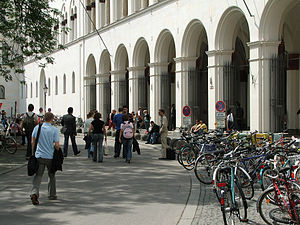 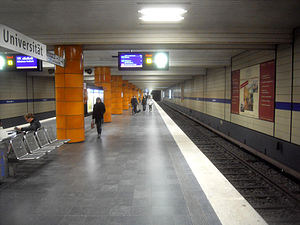 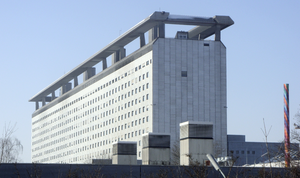 LMU's institutes and research centers are spread throughout Munich, with several buildings located in the suburbs of Oberschleissheim and Garching as well as Maisach and Bad Tölz. The university's main buildings are grouped around Geschwister-Scholl-Platz and Professor-Huber-Platz on Ludwigstrasse, extending into side streets such as Akademiestraße, Schellingstraße, and Veterinärstraße. Other large campuses and institutes are located in Großhadern (Klinikum Großhadern), Martinsried (chemistry and biotechnology campus), the Ludwigsvorstadt (Klinikum Innenstadt) and in the Lehel (Institut am Englischen Garten), across from the main buildings, through the Englischer Garten.

Subjects and fields of study

Despite the Bologna Process which saw the demise of most traditional academic degree courses such as the Diplom and Magister Artium in favour of the more internationally known Bachelors and Masters system, the University of Munich continues to offer more than 100 areas of study with numerous combinations of majors and minors.[5]

In line with the university's internationalisation as a popular destination for tertiary studies, an increasing number of courses mainly at the graduate and post-graduate levels are also available in English to cater to international students who may have little or no background in the German language.[6] Some notable subject areas which currently offer programmes in English include various fields of psychology, physics as well as business and management. A list of current programmes offered in English can be accessed directly from the university's international website while a complete list of courses offered across all academic levels can be found here.[7] 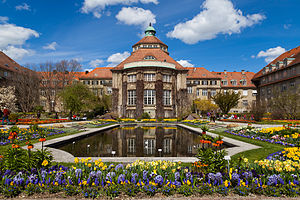 Faculty of chemistry buildings at the Martinsried campus of LMU Munich

The university consists of 18 faculties which oversee various departments and institutes.[8] The official numbering of the faculties and the missing numbers 06 and 14 are the result of breakups and mergers of faculties in the past. The Faculty of Forestry operations with number 06 has been integrated into the Technical University of Munich in 1999 and faculty number 14 has been merged with faculty number 13.[9][10][11]

In addition to its 18 faculties, the University of Munich also maintains numerous research centres involved in numerous cross-faculty and transdisciplinary projects to complement its various academic programmes.[12] Some of these research centres were a result of cooperation between the university and renowned external partners from academia and industry; the Rachel Carson Center for Environment and Society, for example, was established through a joint initiative between LMU Munich and the Deutsches Museum, while the Parmenides Center for the Study of Thinking resulted from the collaboration between the Parmenides Foundation and LMU Munich's Human Science Center.[13]

Some of the research centres which have been established include:

The total tuition fees administered by the university amounted to €542. After a popular petition, however, tuition fees in the federal state of Bavaria have been abolished. Together with the new semester ticket basic fee (see following paragraph), every student pays €111 a semester.

Despite being home to a large student population as well as being one of the most expensive German cities to live in,[14] Munich until 2013 stood out as being one of the few German cities which did not offer a semester transportation pass (generally known as a Semesterticket) to students. Because of this, students in Munich had to separately apply for the Munich Transport and Tariff Association's (MVV) monthly subscription which came at a significantly higher price as opposed to what a Semesterticket would have cost in other German cities.

In 2009, the MVV offered a package which would introduce a Semesterticket at a basic fee of €78.50 with a premium surchage of €143.50, totalling €222; this proposition narrowly fell through after voting was conducted across all the Munich universities as it was still deemed to be too pricey in comparison to the Semesterickets offered by other German cities, with students of the LMU Munich voting 52.1% against and 47.9% in favour.[15] In 2012, a reconditioned package with a basic fee of €59 and a total price of €200 was finally accepted by an overwhelming majority of 86,3% of students across all universities. The ticket was introduced in the 2013 winter term.[16]

The alumni of Ludwig Maximilian University of Munich played a major role in the development of quantum mechanics. Max Planck, the founder of quantum theory and Nobel laureate in Physics in 1918, was an alumnus of the university. Founders of quantum mechanics such as Werner Heisenberg, Wolfgang Pauli, and others were associated with the university. Most recently, to honor the Nobel laureate in Chemistry Gerhard Ertl, who worked as a professor at the University of Munich from 1973–1986, the building of the Physical Chemistry was named after him.

Sir Muhammad Iqbal a great philosopher, regarded as the Shair-e-Mashriq (شاعر المشرق, "Poet of the East"),[25][26][27] also called Muffakir-e-Pakistan (مفکر پاکستان, "The Thinker of Pakistan") and Hakeem-ul-Ummat (حکیم الامت, "The Sage of the Ummah"), moved to Germany in 1907, to study doctorate and earned PhD degree from the Ludwig Maximilian University, Munich in 1908. Working under the guidance of Friedrich Hommel, Iqbal published his doctoral thesis in 1908 entitled: The Development of Metaphysics in Persia.[26][28][29][30]

The anti-Nazi resistance White Rose was based in this university.[31]