University of Pittsburgh at Johnstown

University of Pittsburgh at Johnstown, also known as UPJ or Pitt-Johnstown, is a four-year, degree-granting state-related university institution that is a residential, regional campus of the University of Pittsburgh. The university is located in Richland Township, a suburban area of Johnstown, Pennsylvania, and was founded in 1927 as one of the first regional campuses of a major university in the United States. UPJ is ranked as the 28th best baccalaureate college in the North and the eighth best public baccalaureate college in the North by U.S. News & World Report in its "America's Best Colleges 2010" annual college guide.[4] UPJ is also listed among the "Best Colleges in the Northeastern Region" by The Princeton Review.[5]

The University of Pittsburgh first established a presence in the area prior to World War I, when the Johnstown School Board asked the university to offer continuing education courses at extension class sites in local teachers' institutions. By 1926, a more permanent relationship was sought by the school board, and UPJ was officially founded as a two-year college of the University of Pittsburgh on September 24, 1927.[6] Throughout the 1920s and 1930s it held classes in the Johnstown High School building in the Kernville neighborhood which adjoins downtown Johnstown. After World War II, the Johnstown College moved to the Moxham section of the city where the number of courses and students increased. In the early 1960s, community leaders worked with the University of Pittsburgh to build a new campus in suburban Richland Township. The new campus opened in 1967 with two classroom buildings, five dormitories, and a student union. Degree-granting status was awarded to UPJ by the University of Pittsburgh in 1970. The campus has grown significantly since that time with five academic buildings, a library, an expanded student union, a sports and aquatic center, a conference center, a chapel, a performing arts center, and a large cluster of dormitories, lodges, townhouse apartments and other student residence housing. UPJ now offers over 40 baccalaureate and associate degree programs. 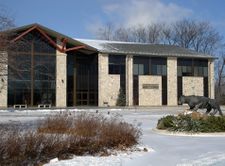 The Mountain Cat statue outside of Blackington Hall

UPJ offers a Bachelor of Arts and a Bachelor of Science degree in over 40 areas of study in seven academic divisions,[7] as well as offering the ability to obtain master's degrees in social work and nursing, a doctor of nurse practice,[8] several associate degrees in the allied health area, as well as certificate programs. The college offers 48 undergraduate majors, with minors available in most of the major fields, as well as in other areas of arts and sciences. The average class size is 25–30, and the student to teacher ratio is 18:1. The college is strictly undergraduate, and all courses are taught by college faculty. The 149 faculty members have outstanding credentials and remain active professionally. Special opportunities include internships, the President's Scholars program, independent and directed studies, a self-designed major, the Freshman Seminar Series, an International Studies Certificate, and the Academic Success Center.

The Pitt-Johnstown campus is situated in a suburban, wooded setting occupying 650 acres (2.6 km2) which makes UPJ physically the third-largest campus in Pennsylvania. It is located eight miles (13 km) outside of Johnstown, Pennsylvania (metropolitan population of 110,000); 70 miles (110 km) east of Pittsburgh; and 175 miles (282 km) north of Washington, D.C.

Also available to students is the advanced technology classroom (ATC) in Biddle Hall. The room is designed for electronic distance learning. It is equipped with satellite down-link programming, three full-motion cameras, data ports, video monitors, and much more. It is currently one of the most sophisticated ATCs in operation at any college or university in Pennsylvania.

The Owen Library holds more than 146,086 bound volumes, 15,358 titles on microfilm, 625 periodical subscriptions, approximately 130 online subscription databases, and more than 4,500 electronic journals. All students have additional access to many additional libraries on Pitt's other campuses. 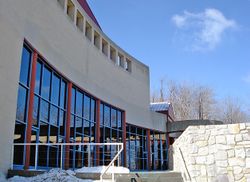 Campus-wide computing labs for student use are available. Labs primarily contain Windows 8-based PCs, along with several Macintosh computers, application servers, laser printers, scanners, and advanced graphics devices. The labs can be used to work with software, such as word processing and programming languages, or to access network services, such as online card catalogs, electronic mail, and the Internet. There are more than 150 computers available on campus for student use.

The Student Union, located in the middle of campus, houses the Student Life Office, Health Services, Residence Services, Career Services, Campus Ministry, and the Bookstore/convenience store. Also included are a full-service mail room, a 400-person cafeteria, a fast food shop, and a nonalcoholic pub. The union also holds a game room, information desk, and many organizational offices. A recent renovation created a bistro-style restaurant, named the Mountain Cat Club, as a dining option for students. Located directly outside of the cafeteria, the club features flat screen televisions, a dance floor, and a stage in order to provide an additional area for student programming.[9][10]

The Pasquerilla Performing Arts Center (PPAC) is a 42,000-square-foot (3,900 m2) multipurpose facility; it was completed in 1991. It contains a 1,000-seat concert hall, a 200-seat black box theater, and supporting operational spaces. Performances include UPJ Department of Theatre Arts shows and Broadway productions. The PPAC is also home to the Johnstown Symphony Orchestra and the Southern Alleghenies Museum of Art at Johnstown. The art gallery displays at least eight exhibitions a year as well as work produced by UPJ students. 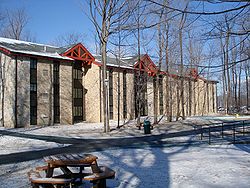 The J. Irving Whalley Memorial Chapel was constructed in 1991 as well. It is nondenominational and seats 250 people. Weekly Catholic mass and Protestant services are held, as well as personal conferences.

The Sports Center and Zamias Aquatic Center provide recreational facilities for more than 15 intramural sports, as well as intercollegiate activities. The building houses a 25-yard (23 m) indoor swimming pool, a workout room with free weights, an aerobic/dance studio, and locker rooms with showers. On January 5, 2011, the university opened the $9.7 million 40,000-square-foot (3,700 m2) Wellness Center which is adjacent to the Sports Center The Wellness Center features a three-lane elevated running track, cardiovascular and strength-training equipment, dance/exercise/classroom space, two multipurpose courts for basketball and volleyball, an indoor climbing wall, as well as an outdoor wellness park.[11][12] 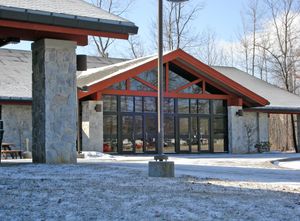 The Living/Learning Center, completed in 1994, is a 400-person residence unit, which includes a full-circuit weight training room, sauna, an aerobics room, and a smaller student cafeteria. The Living/Learning Center is not only used as a residence but also as a conference center throughout the year. With several meeting rooms, the facility can accommodate groups of 20–250 people.

In addition to the residence units in the Living/Learning Center, the campus offers the choice of single-sex and coeducational housing. There are 5 freshman residence halls, one upper class residence hall, seven small-group lodges, 46 townhouse-style apartment units, and an apartment complex.

Pitt-Johnstown is the home to The Heroes Memorial, which is located between Whalley Memorial Chapel and Blackington Hall.[15] The memorial's centerpiece is a 3,500 lb (1,587.6 kg) steel I-beam from the World Trade Center which is surrounded by 12 granite panels that are engraved with over 9,000 names of those who died in the September 11 attacks as well as the service men and women who have been killed in the wars in Afghanistan and Iraq.[16] Dedicated on November 11, 2011, it is believed to be the only memorial of its kind on any college campus in the United States.[17] 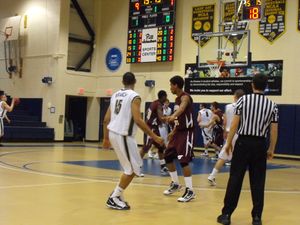 Perhaps the most prominent sport at UPJ is wrestling, which has had several top national finishes and won the Division II National Championships in 1996 and 1999.[20] The wrestling program also includes several highly decorated wrestlers among its former athletes, including the most decorated wrestler in NCAA history, Carlton Haselrig, who went undefeated during his career and won three Division I and three Division II individual national championships.[21]

The baseball team plays some of its home games at Point Stadium. The baseball program participated in the NCAA North Atlantic Regional Tournament in the 2006, and 2008 seasons. 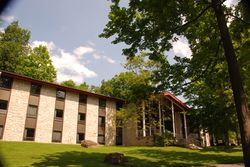 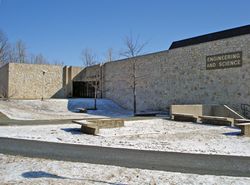