The University of South Africa is the largest university on the African continent and attracts a third of all higher education students in South Africa. The university has over 300,000 students, including African and international students in 130 countries worldwide, making it one of the world's mega universities.

Unisa is a dedicated open distance education institution. Open distance learning (ODL) entails a student-centred approach that gives students flexibility and choice over what, when, where, and how they learn, and provides them with extensive student support.

As a comprehensive university, Unisa offers both vocational and academic programmes, many of which have received international accreditation, as well as an extensive geographical footprint, giving their students recognition and employability in many countries the world over.

Founded in 1873 as the University of the Cape of Good Hope, the University of South Africa (or Unisa as it is commonly known) spent most of its early history as an examining agency for Oxford and Cambridge universities and as an incubator from which most other universities in South Africa are descended. In 1946, it was given a new role as a distance education university and today it offers certificate, diploma and degree courses up to doctoral level.

In January 2004, Unisa merged with Technikon Southern Africa (formerly known as Technikon SA) and incorporated the distance education component of Vista University. The combined institution retained the name University of South Africa, unlike other merged institutions, which underwent name changes. It is now organised by college and by school; see below. 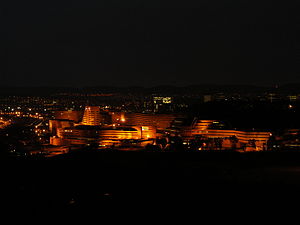 Unisa's Muckleneuk Campus is located in Pretoria and is a major landmark of the capital city. It was in 1972 that Unisa moved into its new home on Muckleneuk Ridge having vacated the old quarters in central Pretoria. The complex of buildings was designed by Bryan Sandrock Architects in the 1960s and expresses an international style characterised by monumental proportions and engineering feats like the cantilevered structures. The most striking feature is the long projection from the brow of the hill, supported by a giant steel girder resting on a massive column.

Also in Pretoria is the Sunnyside campus, the main area of student activity. The Florida campus in Johannesburg is set to become Unisa's science hub. The College of Agriculture and Environmental Sciences and some departments of the College of Science, Engineering and Technology are already situated there.

The university has seven regional centres in South Africa, servicing students in all nine provinces. These are:

In addition to the eight colleges and SBL, Unisa has numerous Bureaus, Centres, Institutes, Museums and Units[1] supporting academic development and research.

In other cases the publication of an institution’s name in specific authoritative publications forms the basis of accreditation. Students must however enquire from the specific foreign country/university whether Unisa’s qualifications are accredited/recognised.[3]

On 12 January 2002, Unisa was granted full institutional accreditation from the Accrediting Commission of the Distance Education and Training Council (DETC). The accreditation lapsed in March 2007, and Unisa did not pursue renewal.

Students need a school-leaving qualification that would entitle them to enter a university or college in their own country.

Market research has shown that Unisa is rated as one of the top universities in South Africa (2001) - Unisa qualifications are sought after in the marketplace.[according to whom?]

Unisa has been promoting and promulgating culture in all its manifestations since its inception in 1873. Apart from the academic courses offered by Unisa's College of Humanities, practical language, art and music skills have been actively pursued through the setting of curricula and the implementation of special courses and examinations.

The Unisa Foundation was established in 1966 and now has approximately 280 active donors, many of them individual alumni with the desire to give back to the communities, South African and international, with a sense of social responsibility. Equally vital is the role played by the Board of Trustees, whose members not only oversee the affairs of the Unisa Foundation but who also lend the weight of their professional and personal reputations in a drive to reach potential donors, without financial reward to themselves.

Unisa Press is the largest university press in South Africa, with the biggest publication list.

Vice-Chancellors of the University of the Cape of Good Hope, from 1873 to 1918

Chancellors of the University of South Africa from 1918 to Present

Vice-Chancellors of University of South Africa, 1918 to 1955

Principals and Vice-Chancellors of the University of South Africa, from 1953 to Present