From Infogalactic: the planetary knowledge core
(Redirected from University of Technology, Sydney)
Jump to: navigation, search

The University of Technology Sydney (UTS) is a university in Sydney, Australia. The university was founded in its current form in 1988, although its origins trace back to the 1870s. It is part of the Australian Technology Network of universities.

The present-day University of Technology originates from the Sydney Mechanics' School of Arts (the oldest continuously running Mechanics' Institute in Australia), which was established in 1833.[5] In the 1870s, the SMSA formed the Workingman's College which was later taken over by the NSW government to form, in 1882, the Sydney Technical College.[1] In 1969, part of the Sydney Technical College became the New South Wales Institute of Technology (NSWIT). It was officially unveiled by Neville Wran.

Although its antecedent institutions go back as far as 1893, they took new shapes from the 1960s, creating a new University focused on practice-oriented education with strong links to industry, the professions and the community, and with a growing research reputation and a strong commitment to internationalisation.[6]

UTS has had three phases in its history:

The University of Technology, Sydney is an interesting mix of architectural styles reflecting the different periods in which the buildings and grounds were constructed and renovated. The famous 'Tower' building is an example of brutalist architecture with square and block concrete designs. Built following massive student protests in U.S. colleges like Berkeley and Kent State University, the building was designed to do away with large, outdoor areas and hence limit students' ability to stage large protests. The Haymarket campus (Building 5) combines a modern interior with the remaining exterior of the old markets building, and the recently completed buildings 4 and 6 are designed with an element of high-tech architecture.

In October 2006, the university's tower building was voted by 23% of the total vote in a poll hosted by The Sydney Morning Herald as ugliest building in Sydney.[16]

The University recently acquired the former Sydney Institute of Technology building that stands opposite to Building 10 (on Jones St) and adjacent to Building 2. This building was named Building 7, but was demolished to make way for an extension of Alumni Green. Currently, the university is constructing an underground multi-purpose sports hall beside the Alumni Green. Designed by PTW Architects, this project commenced in late January 2010 and opened in April 2011.[17]

The University offers modern, self-catering accommodation in five buildings named Yura Mudang, Gumal Ngurang, Geegal, Bulga Ngurra, and Blackfriars. Yura Mudang is the largest complex with 720 beds. The 14 levels of Housing (21 levels in total) are built on top of UTS building 6 on Harris Street. Gumal Ngurang is the second largest complex and is located on Broadway, just down the road from Bulga Ngurra. 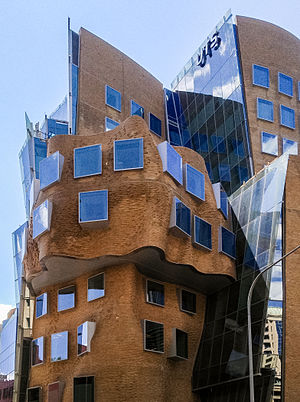 2009–2013 will see the construction of a new building on Broadway to house the Faculty of Engineering and Information Technology. In the medium term future UTS will make a significant investment in its facilities intending to create a world-class campus. This is part of the UTS City Campus Masterplan which was approved by the University Council in August 2008.[18] This plan which was unveiled to the public on 19 January 2009 will commence in mid 2009 and involve:[19]

The University of Technology, Sydney (UTS) provides services through two campus libraries, the City Campus (Blake Library) and the Kuring-gai Campus (George Muir Library) as well as an extensive range of online services on the UTS Library website.

UTS is widely recognized as providing library services and facilities that are innovative, creative and user-focused. UTS Library offers numerous online and on-campus services, facilities and resources to support the University's teaching, learning and research programs.

The UTS Academic Board is the principal advisory body to the UTS Council on academic matters.

The Academic Board is concerned with policy development as it relates to the University's academic programs in education, scholarship and research, and community service. It refers to policy recommendations to Council and discusses matters referred to it by Council.

Academic Board plays a key role in the UTS community in providing a forum for the discussion and debate of the academic directions of the University as well as the quality of its academic programs. The Board consists of academic staff members as well as student members elected for a general period of 1–2 years.[21]

The UTS Union is the organisation which runs a range of on-campus student services, including food & beverage outlets, cultural activities, student social events, and is responsible for overseeing UTS clubs & societies, sports clubs and other recreational activities. The UTS gym has recently been renovated. The City Campus is home to two licensed bars, 'The Underground' and 'The Loft'.

UTS has its own community radio station on campus, 2SER FM. The studio is located on Level 26 of the UTS Tower and broadcasts to the entire Sydney region. The station is jointly owned by UTS and Macquarie University, with a second studio at Macquarie University. UTS Journalism students help produce the station's news and current affairs programs including "The Wire" and "Razors Edge".

The UTS Students' Association is the representative student organisation at UTS. It publishes the student newspaper, Vertigo, runs the second hand bookshop, and advocates on behalf of students both individually and collectively.

UTS sports clubs include: The UTS Hockey club (established in 1982); the UTS rowing club located at Haberfield; the Sydney Cricket Club was formed in 2007 from a merger between the Sydney Cricket Ground Trust and the UTS Balmain Cricket Club; UTS Tigers (formerly UTS Jets) is the University's rugby league team, affiliated with the Balmain Tigers rugby league club; UTS Gridiron competes in the Gridiron NSW league (American football); UTS fencing club; the UTS Northern Suburbs Athletic Club; the UTS Volleyball Club; the UTS Basketball Club; the UTS Swimming Club was established in 2009; the UTS Australian Football Club or "The Bats" was formed in 1999; the UTS Soccer Club. Other popular sports at the University include Ultimate Frisbee, Lawn Bowls, touch rugby league and 5-a-side football. The general sporting colours at UTS are green and black.