The University of Waikato (Māori: Te Whare Wānanga o Waikato), informally Waikato University, is a comprehensive university in Hamilton, New Zealand, with a satellite campus located in Tauranga. Established in 1964, it was the first university in New Zealand to be designed from a blank canvas.[2]

The University of Waikato owes its existence to a determined group of Hamilton locals, who in 1956 launched a petition for a university to serve the needs of the South Auckland region. The group was led by Douglas Seymour, a barrister, and subsequently Anthony "Rufus" Rogers, a Hamilton GP and brother to long-time Mayor of Hamilton, Denis Rogers.[2]

Their campaign coincided with a shortage of teachers in the 1950s that prompted the New Zealand government to consider plans for a teachers’ college in the region. Where there was a teachers’ college, there needed to be a university to give students access to undergraduate courses.[3]

In 1960, the newly established Hamilton Teachers’ College opened its doors, and combined forces with the fledgling university (then a branch of Auckland University) to plan a new joint campus on farmland at Hillcrest, on the city's outskirts.[2]

In 1964, the two institutions moved to their new home, and the following year the University of Waikato was officially opened by then Governor-General Sir Bernard Fergusson.[2]

The first Vice-Chancellor, Dr Don Llewellyn, was keen to develop the shared campus as one and build a single academic programme, an approach welcomed by the Teachers' College Principal, John Allan. But even the idea of co-location flew in the face of established practice, and the formal merger of the two institutions did not take place until 1990.[3]

At this time the University comprised a School of Humanities and a School of Social Sciences.[2] In 1969, Dr Llewellyn succeeded in persuading the authorities to fund the establishment of a School of Science (now the Faculty of Science and Engineering).[4]

This was followed by the creation of Waikato Management School in 1972,[2] Computer Science and Computing Services (which ultimately became the Faculty of Computing and Mathematical Sciences) in 1973,[2] and the establishment of the School, now Faculty, of Law in 1990.[5]

From the beginning, it was envisaged that Māori studies should be a key feature of the new University,[2] and the Centre for Māori Studies and Research was finally set up in the School of Social Sciences in 1972, after many delays.[2] A separate School of Māori and Pacific Development was formally established in 1996.[6]

In 2010, the tertiary partnership was widened to include Te Whare Wānanga o Awanuiārangi in the Eastern Bay of Plenty,[8] and funding is currently being sought for a dedicated university-led campus in Tauranga.[9]

In 2014, the University became smoke-free, disallowing smoking on campus and in University-owned vehicles.[10] 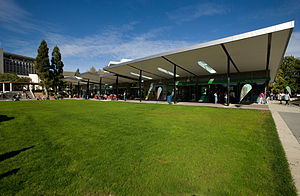 The village green is the social hub of the University of Waikato's Hamilton campus. 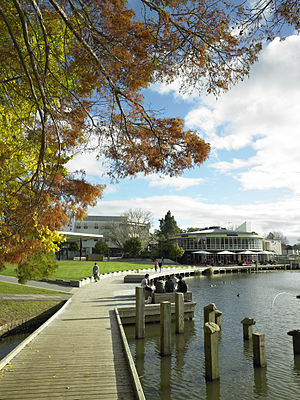 One of three lakes on the University of Waikato's Hamilton campus.

The University of Waikato operates from two campuses – in Hamilton and Tauranga. The main Hamilton campus is spread over 64 hectares of landscaped gardens and lakes, and includes extensive sporting and recreational areas. In Tauranga, the University shares campuses with the Bay of Plenty Polytechnic at Windermere Campus and the Bongard Centre in Tauranga's CBD.

The lakes play a vital role in the University’s stormwater system, but they are shallow, making them susceptible to eutrophication. Each spring harvesting takes place to remove excess water weed and remove pest fish.

The social heart of the Hamilton campus is the new Student Centre, which was officially opened in 2011 by Waikato alumnus Governor-General Lt Gen The Rt Hon Sir Jerry Mateparae. Designed to incorporate the existing University library, the $30 million building has been awarded five green stars for sustainable design, the first five-star project in the Waikato region.[13] 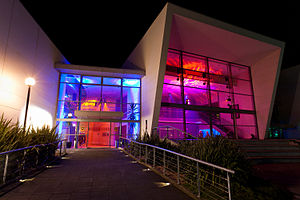 The Gallagher Academy of Performing Arts.

The Hamilton campus is also home to the Gallagher Academy of Performing Arts. Overlooking Knighton Lake, the award-winning building was built through public subscription and opened in 2001. It provides teaching and performance facilities for music, drama, dance and kapa haka as well as exhibition space, and attracts internationally renowned performers and artists.

In 2011, Waikato Management School’s MBA programme for Māori leaders won AMBA’s inaugural MBA Innovation Award.[15] The Waikato MBA is delivered in partnership with the Waikato-Tainui College for Research and Development. In 2012, the Centre for Corporate and Executive Education received re-accreditation for its MBA[16] programme from AMBA for five years, the maximum length of accreditation available. Its full-time MBM programme also received the highly regarded AMBA accreditation, the first MBM in New Zealand to receive this honour.[17]

The University’s Bachelor of Engineering degrees are all internationally accredited by the Institute of Professional Engineers of New Zealand (IPENZ).[18] The BE qualifications include 800 hours of work experience and cover chemical and biological engineering, electronic engineering, materials and process engineering, mechanical engineering, and software engineering.

In 2015, the University of Waikato is ranked 338 in the world by the QS (Quacquarelli Symonds Limited) World University Rankings 2015. This sees a climb in the rankings of over 60 places from 2014 in which it was ranked 405 in the world.

In 2013, the University of Waikato was ranked 46th of the universities under 50 years old in the world by UK-based Times Higher Education World University Rankings,[22] up from 58th in 2012. The list is an offshoot of the Times Higher Education World University Rankings and used the same indicators for judging including research, citations and teaching. THE says the analysis of young universities is designed to examine future potential as much as current excellence. It uses objective performance indicators and focus less on reputation, saying older universities enjoy established alumni networks and graduates in senior positions around the world which have a large impact on reputation.

The University of Waikato Library/Te Whare Pukapuka o Te Whare Wānanga o Waikato is a complex and dynamic academic library. It is the University’s gateway to knowledge, providing information and resources for staff and students. It aims to stimulate and encourage within the University community a culture of lifelong learning and intellectual independence. The Library offers a comprehensive user-education programme ranging from orientation tours at the beginning of each semester to in-depth tutorials on information retrieval and access. One-to-one research consultations are provided for graduate students and academic staff. Library staff are directly involved in teaching and assessment of information literacy, both within degree-level programmes and also through individual and group tutorial programmes.

The Library is situated centrally on campus and serves both on-campus and distance students. There is a separate Education Library, a collection based at the Bay of Plenty Polytechnic Library in Tauranga, and collections in storage off-campus in Hamilton. The Library contains about 1,059,000 print volumes, receives 2,144 print serial titles and subscribes to a large number of networked databases and electronic journals, providing access to over 162,000 electronic resources. There is a policy to move to digital content where there is choice. The Library is a member of the LCoNZ consortium.

The University’s marae, Te Kohinga Mārama, was opened in 1987 as part of the then College of Education, and comes under the mantle of Kīngi Tuheitia, the Māori King. The marae is under the stewardship of the people of Ngāti Haua and Ngāti Wairere, and the University community of staff and students.

The University enrols approximately 15% of New Zealand’s Māori university students, the highest proportion of any New Zealand university. These students make up 17% of all equivalent full-time students (EFTS) at Waikato. Māori academic staff make up 10% of the total, and hold one-quarter of all senior positions throughout the University.

Each year in April, the University celebrates its commitment to kaupapa and tikanga Māori on Kīngitanga Day. It is also a strategic partner in Te Matatini, the biennial national kapa haka competition.

The University delivers an annual programme of alumni events, publications and benefits to nurture an ongoing relationship with its former students. Waikato Alumni Representatives are volunteers based in cities around the world and are helpful contacts for providing social or business networking opportunities. In 2007, the Distinguished Alumni Awards were launched to celebrate Waikato graduates who have made outstanding contributions in their careers or communities.

The University offer a large number of scholarships, for school leavers through to graduates. The Sir Edmund Hillary Scholarship Programme, launched in 2005, assists students who are talented sports people or artistic performers while they undertake tertiary study. Each year, the University accepts around 50 new Hillary Scholars, who receive a full-fee scholarship, personalised academic support, leading tutors in their area of sports/arts, funding for specialised skills development and leadership training.