The University of Windsor (U of W or UWindsor) is a public comprehensive and research university in Windsor, Ontario, Canada.[3] It is Canada's southernmost university.[4] It has a student population of approximately 15,000 full-time and part-time undergraduate students and over 1000 graduate students.[5] The University of Windsor has graduated more than 100,000 alumni since its founding.[6] 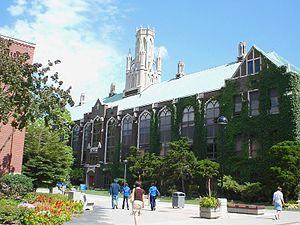 The University dates back to the founding of Assumption College Roman Catholic in Windsor, Ontario in 1857.[8] Assumption College, a primarily theological institution, was founded by the Basilian Fathers of the priestly teaching Congregation of St. Basil, in 1857. The college grew steadily, expanding its curriculum and affiliating with numerous other colleges over the years.[9]

Escalating costs forced Assumption University (a denominational university) to become a public institution in order to qualify for public support.[10]

In 1950, Assumption College welcomed its first women students. In 1953, through an Act of the Ontario Legislature, Assumption College received its own university powers, and ended its affiliation with the University of Western Ontario. In 1956, the institution’s name was changed to Assumption University of Windsor, by an Act of the Ontario Legislature, with Reverend Eugene Carlisle LeBel, C.S.B. named as its first President.[12] The recently created non-denominational Essex College, led by Frank A. DeMarco, became an affiliate, with responsibility for the Pure Sciences, Applied Sciences, as well as the Schools of Business Administration and Nursing. ( Essex College's Arms and Badge were registered with the Canadian Heraldic Authority on March 15, 2007.)[13]

In the early 1960s, the City of Windsor’s growth and demands for higher education led to a further restructuring. A petition was made to the Province of Ontario, for the creation of a non-denominational University of Windsor, by the board of governors and regents of Assumption University, and the board of directors of Essex College.[12] The University of Windsor came into existence through its incorporation under an Act of the Legislative Assembly of Ontario on December 19, 1962. The transition from an historic Roman Catholic university to a non-denominational provincial university was a development that was unprecedented.[12]

On July 1, 1963, the entire campus with all of its facilities and faculty became known as the University of Windsor. As a 'federated member', Assumption University remained as an integrated institution, granting degrees only in its Faculty of Theology.[12] Father Eugene Carlisle LeBel from Assumption became the inaugural president of the University of Windsor, and Frank A. DeMarco, who had been holding both positions of Principal, as well as Dean of Applied Science at Essex College, became the inaugural Vice President. The University's coats of arms were designed by Alan Beddoe.[15] 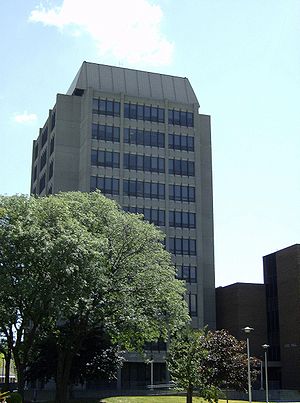 In 1964, when E.C. LeBel retired, Dr. John Francis Leddy was appointed President of the University of Windsor, and presided over a period of significant growth. From 1967 to 1977, Windsor grew from approximately 1,500 to 8,000 full-time students. In the 1980s and early 1990s, this growth continued. Among the new buildings erected were the Odette Business Building and the CAW Student Centre.

Enrollment at the University reached record heights in Fall 2003 with the elimination of Grade 13 (Ontario Academic Credit) in Ontario. The university has developed a number of partnerships with local businesses and industry, such as the University of Windsor/Chrysler Canada Ltd. Automotive Research and Development Centre, the only one of its kind in North America.

University of Windsor's Arms were registered with the Canadian Heraldic Authority on March 15, 2007.[16]

The University of Windsor has entered into a strategic partnership with Maple Leaf Sports and Entertainment.[17] Together, the two will create new student internships, pursue research opportunities and establish promotions with the Toronto Maple Leafs, Raptors, Toronto FC and the Toronto Marlies hockey club. The agreement is the first partnership of its kind for both organizations.

Windsor offers more than 120 majors and minors and 55 master's and doctoral degree programs across nine faculties:[18] 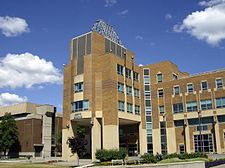 The Faculty of Law is one of six in Ontario, and has a major teaching and research focus on Social Justice issues. It publishes two law journals the Faculty led Access to Justice and the student run, peer-reviewed Windsor Review of Legal and Social Issues.

The University of Windsor runs a second legal clinic, Community Legal Aid, located at the corner of Sunset and University. This clinic is a Student Legal Aid Services Society (SLASS) clinic, which is staffed primarily by volunteer law students and overseen by supervising lawyers, called review counsel. This clinic operates primarily in the areas of criminal law, landlord tenant law, and small claims court. The clinic offers free legal services to those who qualify financially and all students of the University of Windsor.

As of 2008, the University of Windsor is also home to a satellite campus of the Schulich School of Medicine & Dentistry of the University of Western Ontario. There are currently 152 medical students studying full-time at the Windsor campus.[19] 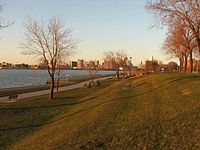 View of the Detroit skyline from the park bordering campus.

Located in Canada's traditional "automotive capital" across the border from Detroit, the campus is situated near the United States and its busy port of entry to and from the United States. It is framed by the Ambassador Bridge to the west and the Detroit River to the north.

The campus covers 51 hectares (130 acres) (contiguous) and is surrounded by a residential neighborhood. The campus features a small arboretum, which represents most of the species from the Carolinian forest. Campus is approximately a 10-minute drive from downtown Windsor. The University has moved some academic programs to the downtown core, including Social Work and the Executive and Professional Education program. Music and Fine Arts will follow by 2017.

The CAW Student Centre has a view of the Ambassador Bridge, and houses a food court and the campus bookstore. Also within the CAW Centre: Student Health Services, a dental office, counselling services, a photographer, a pharmacy, the University of Windsor Students' Alliance (UWSA), a Multi-Faith Space, the campus community radio station CJAM-FM, and an information desk.

The St. Denis Centre, located at the south end of campus on College Avenue, is the major athletic and recreational facility for students. It has a weight room, exercise facilities, and a swimming pool. The new South Campus Stadium built for the 2005 Pan-American Junior Games is beside the St. Denis Centre - which also has dressing rooms for Lancer teams - and borders Huron Church Road, the major avenue to and from the border crossing. The athletics department has become well known for Track & Field, and Men and Women's Basketball. The majority of the Lancer teams made the playoffs this year (2010) and the program continues to grow in championship titles.[20] 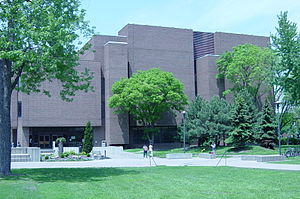 The Leddy Library is the main campus library for the University of Windsor. The library’s collection consists of over 3 million items including electronic resources holdings of over 17,000 electronic titles and several hundred thousand data sets. The Scholarship at UWindsor institutional repository provides open access to thousands of electronic theses, dissertations, and faculty publications from the University of Windsor.

The Leddy Library is named in honour of John Francis Leddy, former president of the University of Windsor. Dr. Leddy was born in Ottawa, Ontario on April 16, 1911, but grew up in Saskatoon, Saskatchewan.

International students make up approximately 10% of the student population; about 1500 students from more than 70 countries.

Despite the large number of international students, the majority of students are domestic and come from the southwestern Ontario counties of Essex, Chatham-Kent and Lambton.[21]

Many students take advantage of their proximity to Michigan for cultural, recreational and educational opportunities.

All full-time undergraduate students are members of the University of Windsor Students' Alliance and possess a health and dental plan coverage as well as access to The Thirsty Scholar, a newspaper, and a radio station.

In addition to the newspaper The Lance, which is partially funded by the UWSA and provides stories written by student volunteers, student at the University of Windsor publish several independent publications. The Student Movement is a grassroots, independent, student run paper providing a critical discourse towards administration and the UWSA. The Issue is a student run electronic publication covering international social justice issues.

Leddy Library is the main campus library. The Paul Martin Law Library serves the Faculty of Law. The Canadian Auto Workers Union helped to build the CAW Student Centre which is a central meeting place for students. The University has a unique agreement with the Ambassador Duty-Free Store at Canada's busiest border crossing which provides student jobs, 400 parking spaces, and an annual cash annuity to the school. 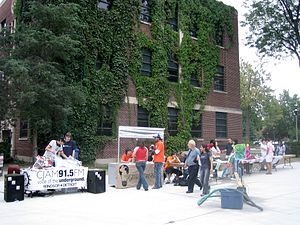 Alumni Hall is the only building on campus that houses Beyond First Year and first year students in the same building but not in the same rooms. It is a suite-style residence where rooms have two bedrooms that share a kitchenette, and 3-piece bathroom. Because of demand, entrance to Alumni Hall is based on grade-point average for first year undergraduate students.

The University established Rosa Schreiber Award with the assistance of former University of Windsor Professor Economics, Alan A. Brown. From the University's Senate Committee on Student Awards: The competition award is open to Arts or Social Science students in Year 2 or beyond. Applicants must submit a 1,500-2,000 word essay on some aspect of moral courage. Submission must be made to the Office of Student Awards. This competition will be held in alternate years. It was established in 1995 to honour Rosa Schreiber, an Austrian Freedom Fighter who risked her life to help others during World War II.

The University's current President is Dr. Alan Wildeman, formerly VP Research at the University of Guelph. He took office on July 1, 2008, as the University’s sixth President and Vice-Chancellor, succeeding Dr. Ross H. Paul.