University of the Balearic Islands

The origins of the University date back to 1483, when King Ferdinand II of Aragon authorized the foundation of the ca (Estudi General Lul·lià) in Palma, Majorca. This college was named after the philosopher and writer Ramon Llull (c.1232–c.1315). It operated until 1835 when it was closed following intense debate.

The faculties of the Estudi General Lul•lià were separated from their sponsoring universities in 1978, forming the University of Palma.

Work on a new campus began in 1983, on the road from Palma to Valldemossa. This was a controversial choice; there was an alternative location near to the original Faculty of Sciences in Palma. In 1998 additional sites were opened in Ibiza and in Alaior, Minorca.

In 1985 the name was changed to the current University of the Balearic Islands.

The School of Tourism was added in 1993, the Faculty of Education in 1992, and the School of Psychology and the Polytechnic School in 2000.

Since 1996 the University has been funded by the Government of the Balearic Islands.

The Palma de Mallorca Metro links the university campus to the city of Palma. This was inaugurated on April 25, 2007, but was closed later that year due to structural problems caused by flooding.

Also on the campus are the Institute of Educational Sciences, for teacher training, the Cultural Activities Service, which organizes the Open University, a student residence (Bartomeu Rosselló-Pòrcel) and a restaurant. 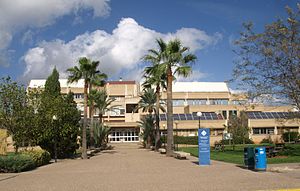 The Palma campus is incomplete. The last building to be inaugurated in 2004, was Block Gaspar Melchor de Jovellanos, the current headquarters of the faculties of Economics and Law. The remaining buildings include the main library, a multi-faith chapel and additional parking. Work is underway on the recovery of ancient natural areas ("nuthatches"), to form green zones which will be studied by biology students. Also proposed are the modification and expansion of the Ramon Llull building, the linking of the two Faculty of Sciences buildings (Mateu Orfila and Guillem Colom Casasnovas) and the construction of a building along the Ma-1110 access road, to be called Block Beatriu of Pinós II.

Links with other universities

The UIB belongs to the Xarxa Vives d'Universitats and Grupo 9 networks of universities. It has signed cooperation agreements with most Spanish universities and with research centers in Europe, America, Africa and Asia. Students from the United Kingdom and United States can study at the UIB under the International Students Exchange Program.

The working languages of the UIB are Catalan, Spanish and English