University of the Philippines Manila

It is the center of health sciences education in the country, with the establishment of the National Health Sciences Center. It is also a reputable research center in the health sciences in the Asia-Pacific region. It exercises administrative supervision over the Philippine General Hospital (the largest medical center and the national referral center for health in the Philippines).[3][4][5] UP Manila is a reputable school of tertiary learning in the health sciences, and more high school students interested in this field apply to it than to any other college or university in the country.

In 1907, Philippine Commission Act 1688 dated August 17 created the Philippine General Hospital. PGH was eventually linked formally with the CM, with its dean becoming the PGH director.

The College of Public Health (CPH), College of Pharmacy (CP) and the College of Dentistry (CD) started as units of CM and eventually became full-fledged colleges in 1932, 1935 and 1948, respectively. During the World War II, the university continued to hold classes in makeshift rooms. After the war, the university transferred to the Diliman campus in 1948, leaving behind the colleges.

In 1948, the Board of Regents established the College of Nursing. At the 894th meeting of the Board of Regents on October 28, 1977 and through Presidential Executive Order No. 519 dated January 24, 1979, the Health Science Center was created and recognized as an autonomous campus of the UP System. The then existing units related to the health sciences constituted the Center, with the College of Arts and Sciences Manila transformed into a full-fledged unit and made part of the Center.

On October 22, 1982, the Center was renamed UP Manila by virtue of Presidential Executive Order No. 4. In 1988, the Institute for Socio-Biomedical Research (ISBMR) was created to serve as a common administrative and research facility for UP Manila's research units. In 1995, three more units were established to enhance UP Manila's excellence as a center for academic training, research and development - the School of Distance Education, the Graduate Office, now theNational Graduate Office for the Health Sciences, and the Institute of Biotechnology and Molecular Biology (IBMB).

UP Manila is home to nine degree-granting units; the National Institutes of Health (its research arm); a training hospital, the Philippine General Hospital (also a state tertiary referral hospital); and, several academic and administrative support offices.[6]

The campus is spread out in the Ermita (Manila) area as well as in three provinces. The Ermita area has the following institutions: College of Arts & Sciences (CAS), National Teacher Training Center for the Health Professions (NTTC-HP), Office of the University Registrar (OUR) in Padre Faura Street (bounded by Ma. Orosa Street); Philippine General Hospital (PGH) in Taft Avenue; the Colleges of Dentistry (CD), Allied Medical Professions (CAMP), Nursing (CN), Public Health (CPH), and Medicine (CM) at Pedro Gil Street (between Taft Avenue and Adriatico St.); and, the UPM National Institutes of Health (UPM-NIH), also along Pedro Gil St. It also has a UP School of Health Sciences in Palo, Leyte (after Typhoon Yolanda, temporarily located at the UP Tacloban campus); Baler, Aurora; and Koronadal in South Cotabato. (Side Note: After World War II, only three buildings of the original University of the Philippines campus remained largely intact: Rizal Hall or CAS, PGH, and PGH Nurses Home. The main UP campus transferred to Diliman, Quezon City in 1949

UP Manila offers 21 undergraduate, post-graduate, and graduate programs by its nine degree-granting units. Through its School of Distance Education, it hosts a center of the UP Open University.

The College of Arts and Sciences (CAS) was established through an approval of a resolution creating a University Extension Division in Manila on June 21, 1951. It offers courses in Arts and Communication, Behavioral Sciences, Biology, Physical Sciences and Mathematics, Physical Education, and Social Sciences.[7]

The College of Dentistry (CD) was founded in 1915 and offers undergraduate, post-graduate, and graduate programs in Dentistry. It administers the Dental Clinic of the Philippine General Hospital Out-Patient Department (PGH-OPD).[8]

The College of Medicine (CM), the oldest degree-granting unit of the UP System, was established as the Philippine Medical School in 1905. The college offers undergrduate, postgraduate, and graduate programs in medicine. It is the first Center of Excellence in Medicine Education in the Philippines.

Established in 1948, the College of Nursing (CN) offers bachelor, masteral, and doctorate programs in Nursing. It was one of colleges of UP Diliman until it moved to the Manila campus when the Health Sciences Center was created. In 2001, the Commission on Higher Education identified CN as a Center of Excellence in Nursing.[9]

Established in 1975, the School of Health Sciences (SHS) in Palo, Leyte; Baler, Aurora; and Koronadal, So. Cotabato started as the Institute of Health Sciences in Tacloban, a joint project of the Ministry of Health, The Ministry of Local Government and Community Development and the UP System. It offers a ladderized curriculum leading to Doctor in Medicine.[12] 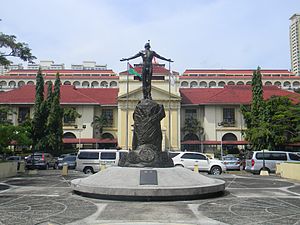 On January 8, 2008, the University of the Philippines began its centennial celebration.

As part of U.P.'s centenary, a second Oblation statue in front of the Philippine General Hospital was unveiled on December 2008. It mirrors U.P. Diliman's possession of the historic Oblation statue, which marked the 50th anniversary of the U.P. System, as this second U.P. Manila Oblation is the centennial marker of the system.[13]