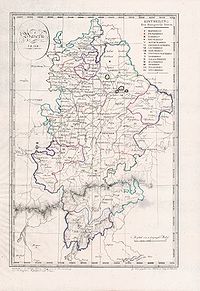 Districts of Bavaria, including Tyrol, in 1808

The district was divided in the following judicial districts (Landgerichte), according to the original borders of the districts of the former territories (Herrschaftsgerichte):

In the years between 1806 and 1808 the Kingdom of Bavaria was divided into 15 districts. Their names were taken from their main rivers. The Unterdonaukreis was initially composed of 10 rural divisions and, since 1809, of the independent city of Passau. In 1810, the Unterdonaukreis was enlarged. In another territorial reorganization initiated by King Ludwig I on 29 November 1837, the Unterdonaukreis again enlarged and renamed Lower Bavaria (Niederbayern). District headquarters were moved from Passau to Landshut.