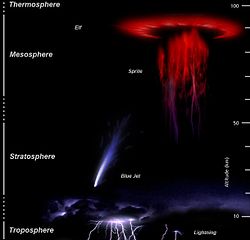 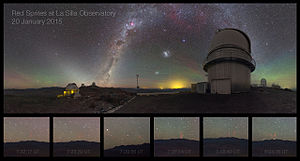 There are several types of TLEs, the most common being sprites. Sprites are flashes of bright red light that occur above storm systems. C-sprites (short for "columniform sprites") is the name given to vertical columns of red light. C-sprites exhibiting tendrils are sometimes called carrot sprites. Other types of TLEs include sprite halos, blue jets, gigantic jets, blue starters, and ELVESs. ELVES (Emission of Light and Very Low Frequency perturbations due to Electromagnetic Pulse Sources) refers to a singular event which is commonly thought of as being plural. TLEs are secondary phenomena that occur in the upper atmosphere in association with underlying thunderstorm lightning.

TLEs generally last anywhere from less than a millisecond to more than 2 seconds. The first video recording of a TLE was captured accidentally on July 6, 1989. Researchers were waiting to record a rocket launch and pointed the camera at a distant thunderstorm. A TLE was later identified, appearing in only two frames of the film. TLEs have been captured by a variety of optical recording systems, with the total number of recent recorded events (early 2009) estimated at many tens-of-thousands. The global rate of TLE occurrence has been estimated from satellite (FORMOSAT-2) observations to be several million events per year.

In the 1920s, the Scottish physicist C.T.R. Wilson predicted that electrical breakdown should occur in the atmosphere high above large thunderstorms.[2][3] In ensuing decades, high altitude electrical discharges were reported by aircraft pilots and discounted by meteorologists until the first direct visual evidence was documented in 1989. Several years later, the optical signatures of these events were named 'sprites' by researchers to avoid inadvertently implying physical properties that were, at the time, still unknown. The terms red sprites and blue jets gained popularity after a video clip was circulated following an aircraft research campaign to study sprites in 1994. 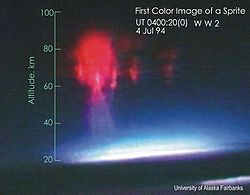 First color image of a sprite, taken from an aircraft.

Sprites are large-scale electrical discharges which occur high above a thunderstorm cloud, or cumulonimbus, giving rise to a quite varied range of visual shapes. They are triggered by the discharges of positive lightning between the thundercloud and the ground.[4] The phenomena were named after the mischievous sprite (e.g., Shakespeare's Ariel or Puck)[5] They normally are colored reddish-orange or greenish-blue, with hanging tendrils below and arcing branches above. They can also be preceded by a reddish halo. They often occur in clusters, lying 50 kilometres (31 mi) to 90 kilometres (56 mi) above the Earth's surface. Sprites have since been witnessed thousands of times.[6] Sprites have been held responsible for otherwise unexplained accidents involving high altitude vehicular operations above thunderstorms.[7]

Blue jets differ from sprites in that they project from the top of the cumulonimbus above a thunderstorm, typically in a narrow cone, to the lowest levels of the ionosphere 40 to 50 km (25 to 30 miles) above the earth. In addition, whereas red sprites tend to be associated with significant lightning strikes, blue jets do not appear to be directly triggered by lightning (they do, however, appear to relate to strong hail activity in thunderstorms).[8] They are also brighter than sprites and, as implied by their name, are blue in color. The color is believed to be due to a set of blue and near-ultraviolet emission lines from neutral and ionized molecular nitrogen. They were first recorded on October 21, 1989, on a monochrome video of a thunderstorm on the horizon taken from the Space Shuttle as it passed over Australia. Blue jets occur much less frequently than sprites. By 2007, fewer than a hundred images had been obtained. The majority of these images, which include the first color imagery, are associated with a single thunderstorm. These were taken in a series of 1994 aircraft flights to study sprites.[9]

Blue starters were discovered on video from a night time research flight around thunderstorms [10] and appear to be "an upward moving luminous phenomenon closely related to blue jets."[11] They appear to be shorter and brighter than blue jets, reaching altitudes of only up to 20 km.[12] "Blue starters appear to be blue jets that never quite make it," according to Dr. Victor P. Pasko, associate professor of electrical engineering.[13] 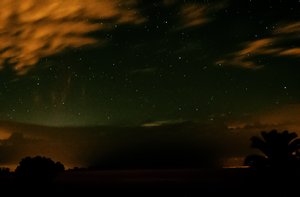 On September 14, 2001, scientists at the Arecibo Observatory photographed a gigantic jet—double the height of those previously observed—reaching around 70 km (43 mi) into the atmosphere.[14] The jet was located above a thunderstorm over an ocean, and lasted under a second. The jet was initially observed to be traveling up at around 50,000 m/s at a speed similar to typical lightning, increased to 160,000 and then 270,000 m/s, but then split in two and sped upward with speeds of at least 2,000,000 m/s to the ionosphere whence they spread out in a bright burst of light.

On July 22, 2002, five gigantic jets between 60 and 70 km (35 to 45 miles) in length were observed over the South China Sea from Taiwan, reported in Nature.[15][16] The jets lasted under a second, with shapes likened by the researchers to giant trees and carrots.

On November 10, 2012, the Chinese Science Bulletin reported a gigantic jet event observed over a thunderstorm in mainland China on August 12, 2010. "GJ event that was clearly recorded in eastern China (storm center located at 35.6°N,119.8°E, near the Huanghai Sea)".[17]

On February 2, 2014, the Oro Verde Observatory of Argentina reported ten or more gigantic jet events observed over a thunderstorm in Entre Ríos south. The storm center was located at 33°S, 60°W, near the city of Rosario.[citation needed]

ELVES often appear as a dim, flattened, expanding glow around 400 km (250 mi) in diameter that lasts for, typically, just one millisecond.[18] They occur in the ionosphere 100 km (62 mi) above the ground over thunderstorms. Their color was a puzzle for some time, but is now believed to be a red hue. ELVES were first recorded on another shuttle mission, this time recorded off French Guiana on October 7, 1990.[11] That ELVES was discovered in the Shuttle Video by the Mesoscale Lightning Experiment (MLE) team at Marshall Space Flight Center, AL led by the Principal Investigator, Otha H."Skeet" Vaughan, Jr.

ELVES is a whimsical acronym for Emissions of Light and Very Low Frequency Perturbations due to Electromagnetic Pulse Sources.[19] This refers to the process by which the light is generated; the excitation of nitrogen molecules due to electron collisions (the electrons possibly having been energized by the electromagnetic pulse caused by a discharge from an underlying thunderstorm).