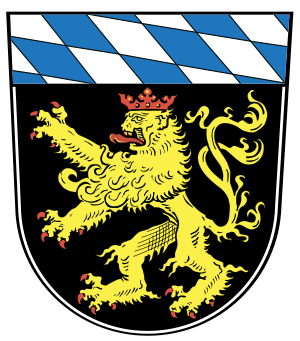 Coat of arms of Upper Bavaria

Upper Bavaria (German: Oberbayern) is one of the seven administrative regions of Bavaria, Germany.

Upper Bavaria is located in the southern portion of Bavaria, and is centered around the city of Munich, both state capital and seat of the district government. It is subdivided into four regions (Planungsverband): Ingolstadt, Munich, Bayerisches Oberland (Bavarian Highland), and Südostoberbayern (South East Upper Bavaria). It is named 'Upper Bavaria' because the land is higher above sea level than the rest of Bavaria, not because it is farther north.

The duchy of Upper Bavaria was created for the first time with the First Bavarian partition in 1255 under duke Louis II but there was no exact correlation between this duchy and the current territory. After the reunification in 1340 Bavaria was divided again in 1349, and in 1392 the duchies Bavaria-Munich and Bavaria-Ingolstadt were created in Upper Bavaria. In 1505 Bavaria was permanently reunited.

After the founding of the Kingdom of Bavaria the state was totally reorganised and, in 1808, divided into 15 administrative government regions (Regierungsbezirke (singular Regierungsbezirk)), in Bavaria called (Kreise (singular Kreis)). They were created in the fashion of the French departements, quite even in size and population, and named after their main rivers. Instead of a Rentamt-style mere administrational unit, the newly created districts became predecessors of modern regional self-government, building a political and administrational link in-between the Bavarian state as a whole and the local authorities.

In the following years, due to territorial changes (e. g. loss of Tyrol, addition of the Palatinate), the number of Kreise was reduced to 8. One of these was the Isarkreis (Isar District). In 1837 king Ludwig I of Bavaria renamed the Kreise after historical names and tribes. This also involved minor border changes or territorial swaps. Thus the name Isarkreis changed to Upper Bavaria. 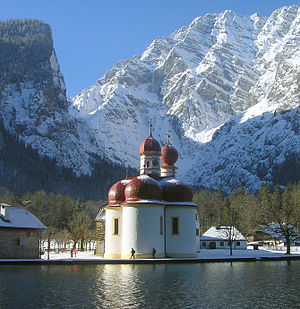 Featured former residence cities are the capital Munich, Ingolstadt and Neuburg an der Donau and the diocesan towns of Freising and Eichstätt. Interesting townscapes have especially also Landsberg am Lech and Wasserburg am Inn.

The highest mountain in Upper Bavaria, Zugspitze, offers an incomparable panoramic view of the Alps. Nestled in forested mountain ranges, the lakes Tegernsee, Schliersee, and Spitzingsee, are idyllically situated. The larger lakes, like Starnberger See, Ammersee (south-west of Munich), and Chiemsee further to the east, all situated in the pre-alpine uplands, offer regular Passenger services on steamers.

Sacred art treasures can be found in the monasteries Andechs, Benediktbeuern and Ettal and in the Wieskirche. Among popular excursions in Upper Bavaria are the Koenigssee with the Sanctuary of St Bartholomew's and the mountain Watzmann, the royal castles of Ludwig II, Linderhof and Herrenchiemsee in Chiemsee, the Burghausen Castle and the castle Hohenaschau. The most important places of pilgrimage are Altoetting and Tuntenhausen.