Upper Egypt is between the Cataracts of the Nile above modern-day Aswan, downriver (northwards) to the area between Dahshur and El-Ayait,[citation needed] which is south of modern-day Cairo. The northern (downriver) part of Upper Egypt, between Sohag and El-Ayait, is also known as Middle Egypt.

In Arabic, inhabitants of Upper Egypt are known as Sa'idis and they generally speak Sa'idi Arabic.

In Pharaonic times, Upper Egypt was known as Ta Shemau[1] which means "the land of reeds."[2] It was divided into twenty-two districts called nomes.[3] The first nome was roughly where modern-day Aswan is and the twenty-second was at modern Atfih (Aphroditopolis), just to the south of Cairo. 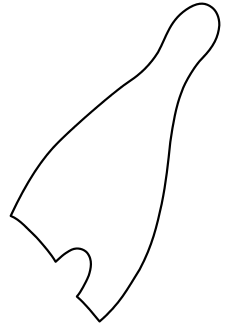 The main city of predynastic Upper Egypt was Nekhen (Hierakonpolis in Greek),[4] whose patron deity was the vulture goddess Nekhbet.[5]

By about 3600 BC, neolithic Egyptian societies along the Nile River had based their culture on the raising of crops and the domestication of animals.[6] Shortly after 3600 BC Egyptian society began to grow and advance rapidly toward refined civilization.[7] A new and distinctive pottery, which was related to the pottery in the Southern Levant, appeared during this time. Extensive use of copper became common during this time.[7] The Mesopotamian process of sun-dried bricks, and architectural building principles—including the use of the arch and recessed walls for decorative effect—became popular during this time.[7]

Concurrent with these cultural advances, a process of unification of the societies and towns of the upper Nile River, or Upper Egypt, occurred. At the same time the societies of the Nile Delta, or Lower Egypt also underwent a unification process.[7] Warfare between Upper and Lower Egypt occurred often.[7] During his reign in Upper Egypt, King Narmer defeated his enemies on the Delta and merged both the Kingdom of Upper and Lower Egypt under his single rule.[8]

For most of pharaonic Egypt's history, Thebes was the administrative center of Upper Egypt. After its devastation by the Assyrians, its importance declined. Under the Ptolemies, Ptolemais Hermiou took over the role of Upper Egypt's capital city.[9] Upper Egypt was represented by the tall White Crown Hedjet, and its symbols were the flowering lotus and the sedge.

In the 11th century, large numbers of pastoralists, known as Hilalians, fled Upper Egypt and moved westward into Libya and as far as Tunis.[10] It is believed that degraded grazing conditions in Upper Egypt, associated with the beginning of the Medieval Warm Period, were the root cause of the migration.[11]

In the 20th-century Egypt, the title Prince of the Sa'id (meaning Prince of Upper Egypt) was used by the heir apparent to the Egyptian throne.[12]

Although the Egyptian monarchy was abolished in 1953, the title continues to be used by Muhammad Ali and Hereditary Chief, Sheikh Beja Khawr al`allaqi, Prince of Sa'id.

List of Pharaohs of the Predynastic Period of Upper Egypt

The following list may not be complete (there are many more of uncertain existence): 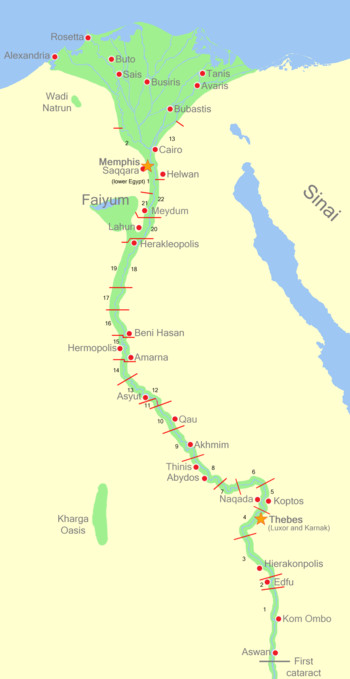 Map of Upper Egypt with its historical nomes