The Upper Palatinate (German: Oberpfalz) is one of the seven administrative regions of Bavaria, Germany, located in the east of Bavaria. 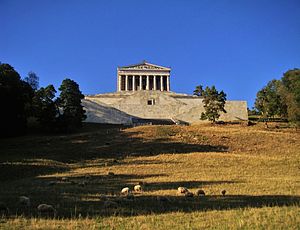 The region took its name no earlier than the early 14th century, because it was by the Treaty of Pavia one of the main portions of the territory of the Wittelsbach Elector Palatine, who also ruled over the Lower Palatinate in the Rhineland, now normally just called the Palatinate, or Pfalz. The capital of the Upper Palatinate was Amberg. Cadet branches of the Wittelsbach also ruled over smaller territories in Neuburg and Sulzbach. As a result of the Elector Palatine Frederick V's abortive claim to the Bohemian throne in 1619–1620, the Upper Palatinate, along with the rest of his lands, were declared forfeit to the Emperor and, along with the Electoral title, given to the Duke of Bavaria. Although the Lower Palatinate was restored to Frederick's son by the Peace of Westphalia in 1648, the Upper Palatinate remained under the Elector of Bavaria, and has remained a part of Bavaria ever since. The smaller territories of Sulzbach and Neuburg came to Bavaria in 1777, when Charles Theodore, Elector of Bavaria inherited the Bavarian lands of his Wittelsbach cousin Maximilian III Joseph, Elector of Bavaria. The city of Regensburg, an Imperial Free City, was not joined with the rest of the region until the end of the Holy Roman Empire in 1806 and the end of the short-lived Principality of Regensburg under Carl von Dalberg, which existed from 1803 to 1810.

After the founding of the Kingdom of Bavaria the state was totally reorganised and, in 1808, divided into 15 administrative government regions (German: Regierungsbezirke (singular Regierungsbezirk)), in Bavaria called Kreise (singular: Kreis). They were created in the fashion of the French departements, quite even in size and population, and named after their main rivers. In the following years, due to territorial changes (e. g. loss of Tyrol, addition of the Palatinate), the number of Kreise was reduced to 8. One of these was the Regenkreis (Regen District). In 1837 king Ludwig I of Bavaria renamed the Kreise after historical territorial names and tribes of the area. This also involved some border changes or territorial swaps. Thus the district name of Regenkreis changed to Upper Palatinate.

The development of railroads in the area is covered in the book Eisenbahn in der Oberpfalz.[2]