From Infogalactic: the planetary knowledge core
Jump to: navigation, search
For the demesne in the Keys to the Kingdom series, see The Upper House.

An upper house, often called a Senate, is one of two chambers of a bicameral legislature, the other chamber being the lower house.[1] The house formally designated as the upper house is usually smaller, and often has more restricted power, than the lower house. Unlike many republics, the United States does not designate an upper house in its constitution. Examples of upper houses in other countries include the UK's House of Lords, Canada's Senate, India's Council of the States, and Russia's Federation Council.

A legislature composed of only one house (and which therefore has neither an upper house nor a lower house) is described as unicameral.

An upper house is usually different from the lower house in at least one of the following respects: 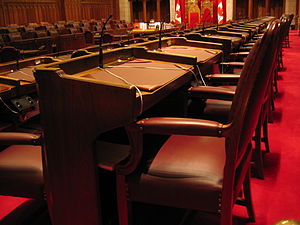 The Canadian Senate chamber at Parliament Hill in Ottawa, Ontario.

Inside the Australian Senate

In parliamentary systems the upper house is frequently seen as an advisory or "revising" chamber; for this reason its powers of direct action are often reduced in some way. Some or all of the following restrictions are often placed on upper houses:

In parliamentary democracies and among European upper houses the Italian Senate is a notable exception to these general rules, in that it has the same powers as its lower counterpart: any law can be initiated in either house, and must be approved in the same form by both houses. Additionally, a Government must have the consent of both to remain in office, a position which is known as "perfect bicameralism" or "equal bicameralism".

The role of a revising chamber is to scrutinise legislation that may have been drafted over-hastily in the lower house, and to suggest amendments that the lower house may nevertheless reject if it wishes to. An example is the British House of Lords. Under the Parliament Acts 1911 and 1949, the House of Lords can no longer prevent the passage of most bills, but it must be given an opportunity to debate them and propose amendments, and can thereby delay the passage of a bill with which it disagrees. Bills can only be delayed for up to one year before the Commons can use the Parliament Act, although economic bills can only be delayed for one month. It is sometimes seen as having a special role of safeguarding the uncodified Constitution of the United Kingdom and important civil liberties against ill-considered change. The British House of Lords has a number of ways to block legislation and to reject it, however the House of Commons can eventually use the Parliament Act to force something through. The Commons will occasionally bargain and negotiate with the Lords such as when the Labour Government of 1999 tried to expel all Hereditary Peers from the Lords, and the Lords threatened to wreck the Government's entire legislative agenda and to block every bill which was sent to the chamber. This led to negotiations between Viscount Cranborne the then Shadow Leader of the House, and the Labour Government which resulted in the Weatherill Amendment to the House of Lords Act 1999 which preserved 92 Hereditary Peers in the house. The Parliament Act is not valid with all legislation and is a very rarely used back up plan.

Even without a veto, an upper house may defeat legislation. Its opposition may give the lower chamber a chance to reconsider or even abandon a controversial measure. It can also delay a bill so that it does not fit within the legislative schedule, or until a general election produces a new lower house that no longer wishes to proceed with the bill.

Nevertheless, some states have long retained powerful upper houses. For example, the consent of the upper house to legislation may be necessary (though, as noted above, this seldom extends to budgetary measures). Constitutional arrangements of states with powerful upper houses usually include a means to resolve situations where the two houses are at odds with each other.

In recent times, Parliamentary systems have tended to weaken the powers of upper houses relative to their lower counterparts. Some upper houses have been abolished completely (see below); others have had their powers reduced by constitutional or legislative amendments. Also, conventions often exist that the upper house ought not to obstruct the business of government for frivolous or merely partisan reasons. These conventions have tended to harden with passage of time.

In presidential systems, the upper house is frequently given other powers to compensate for its restrictions:

There is great variety in the way an upper house's members are assembled: by direct or indirection election, appointment, heredity, or a mixture of these. The German Bundesrat is composed of members of the cabinets of the German states, in most cases the state premier and several ministers; they are delegated and can be recalled anytime. In a very similar way the Council of the European Union is composed of national ministers.

Many upper houses are not directly elected, but appointed: either by the head of government or in some other way. This is usually intended to produce a house of experts or otherwise distinguished citizens, who would not necessarily be returned in an election. For example, members of the Canadian Senate are appointed by the Governor General on advice of the Prime Minister.

The seats are sometimes hereditary, as still is partly the case in the British House of Lords and formerly in the Japanese House of Peers until it was abolished in 1947.

It is also common that the upper house consist of delegates chosen by state governments or local officials. The United States Senate was chosen by the State legislatures until the passage of the Seventeenth Amendment in 1913.

The upper house may be directly elected but in different proportions to the lower house - for example, the Senates of Australia and the United States have a fixed number of elected members from each state, regardless of the population.

Many jurisdictions, such as Croatia, Denmark, Hungary, Iceland, Iran, New Zealand, Peru, Sweden, Turkey, Venezuela and many Indian states as well as Canadian provinces, once possessed upper houses but abolished them to adopt unicameral systems. Newfoundland had a Legislative Council prior to joining Canada, as did Ontario when it was Upper Canada and Quebec from 1791 (as Lower Canada) to 1968. Nebraska is the only state in the United States with a unicameral legislature, having abolished its lower house in 1934.

The current government of Ireland promised a national referendum on abolition of the Seanad Éireann during the 24th Seanad session. By a narrow margin, the Irish public voted to retain the upper house. Conservative-leaning Fine Gael and Left-leaning Sinn Fein both supported the abolition, whilst the centrist Fianna Fáil was alone amongst major parties in supporting the retention of the Seanad.[2]