From Infogalactic: the planetary knowledge core
Jump to: navigation, search
This article is about the town. For the school, see Uppingham School. 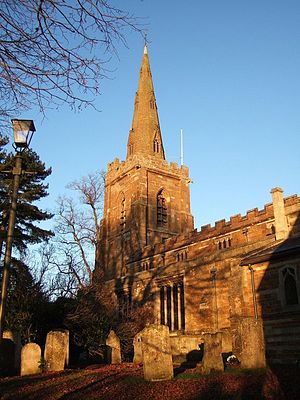 Uppingham is a market town in the county of Rutland in the East Midlands of England, located on the A47 between Leicester and Peterborough, about 6 miles south of the county town, Oakham on the A6003 road.

The market square is transformed once a year into the only fatstock show still to be held in temporary penning in a traditional market town. The first recorded show was in 1889. In 2011, 140 sheep, 24 pigs and 20 cattle were entered. The event attracts farmers from all over the area who exhibit their prize livestock and toast their acquaintances afterwards in The Falcon Hotel.

A little over a mile to the north-west at Castle Hill are the earthwork remains of a medieval motte and bailey castle. The Church of St Peter and St Paul, Uppingham is largely 14th century. It is perhaps known particularly for the early ministry of Jeremy Taylor. Uppingham Workhouse was first recorded in 1777 with space for 40 inmates. Until 1834 it was a parish workhouse, but in 1836 the Uppingham Poor Law Union began, and a new Union workhouse was built on Leicester Road to house 158 people to a design by architect William Donthorne. In the World War I, the building was used as an auxiliary hospital staffed by a Voluntary Aid Detachment. The workhouse was closed in 1929, and taken over by Uppingham School which uses the building as a boarding house for 60 girls called Constables.[1]

The Eyebrook Reservoir near Uppingham was used by Avro Lancasters flying from RAF Scampton as the final practice run for Guy Gibson's 617 Squadron Dambusters prior to Operation Chastise, the attack on the Ruhr valley Dams on the night of the 16/17 May 1943.

In addition, Uppingham Town Council, based at Uppingham Town Hall, is responsible for some services such as allotments, cemeteries and open spaces. There are 15 councillors including the mayor who is currently Councillor David Ainslie (2015).

Schools in Uppingham include Uppingham School, an independent school founded in 1584[2] and a state secondary school, Uppingham Community College and two primary schools: Leighfield and Uppingham Church of England School. A proposal to replace the primaries with a newly built school was rejected in 2007.[citation needed]

There is no railway station in Uppingham. The nearest railway station is at present is Oakham - six miles North - on the cross-country line between Birmingham, Leicester and Peterborough. Alternatively, Corby station nine miles south provides frequent services to London.

Historically, Uppingham railway station, at the end of a branch line from Seaton, was opened in 1894 and was located at the end of Queen Street. Passenger services were withdrawn in 1960 and the line closed completely in 1964. The station area has now been redeveloped as an industrial estate. Although the operational railway line runs closest to Uppingham at Manton Junction, it has no station.

An east-west A47 bypass opened in June 1982, providing a link to Peterborough and Leicester. The A6003 runs through the town and provides connections to Oakham, Corby and Kettering.

There are bus services to Oakham, Corby, Leicester, Peterborough and Stamford.

Uppingham Town Partnership is a council-run partnership, with the support of the County Council; it is not to be confused with Uppingham First, an unelected business partnership, purporting to be the voice of the people of the town