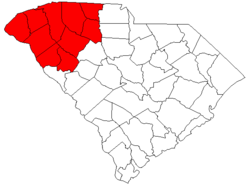 The Upstate is the region in the westernmost part of South Carolina, United States, also known as the Upcountry,[1] which is the historical term. Although loosely defined among locals, the general definition includes the ten counties of the commerce-rich I-85 corridor in the northwest corner of South Carolina. The region's population was 1,409,582 as of 2014. Situated between Atlanta and Charlotte, the Upstate is the fastest-growing region of South Carolina. After BMW's initial investment, foreign companies, including others from Germany have a substantial presence in the Upstate; several large corporations have established regional, national, or continental headquarters in the area. Greenville is the largest city in the region with an urban population of 400,492, and it is the base of most commercial activity. Spartanburg, then Anderson, are next in population. 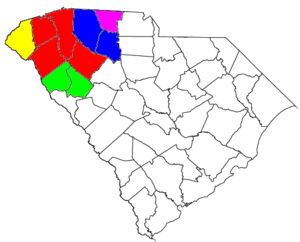 The following population rankings are based on the 2010 Census[2]

The Office of Management and Budget labels all these cities as principal cities in their respective MSA's.[4]

Other communities with at least 20,000 residents

The OMB has labelled Mauldin as a principal city.

Communities with more than 10,000 residents

If students from Clemson University are included, Clemson has close to 30,000 residents. The OMB has labelled Easley as a principal city.

Communities with fewer than 10,000 inhabitants

Communities in the upstate with under 10,000 residents include:

According to the 2010 Census, no town in the Upstate has a population greater than 6000. 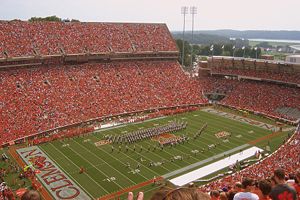 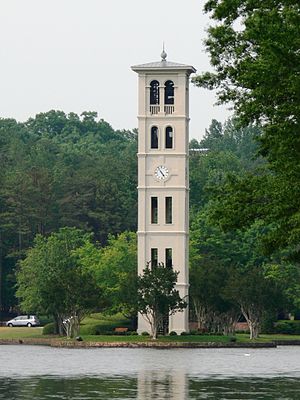 The following table shows the major institutions of higher education in the Upstate.

In 2008, U.S. News ranked Furman as the 37th best liberal arts college, Wofford College as the 59th best, and Presbyterian College as the 101st best. Also, they ranked Clemson University as the 67th best national university. Additionally, the Bob Jones University Museum and Gallery constitutes the largest collection of religious art in the Western Hemisphere. [1]

The majority of business and commerce in the Upstate takes place in Greenville County. Greenville has the largest concentration of businesses and financial institutions in its downtown area. In fact, the Greenville-Spartanburg-Anderson MSA was ranked seventh in the nation by site consultants considering the top markets for economic development. Many financial institutions have regional offices located in downtown Greenville. These include Wachovia and Bank of America. Other major industries of commerce in the Upstate include the auto industry which is concentrated mainly along the corridor between Greenville and Spartanburg around the BMW manufacturing facility in Greer. The other major industry in the Upstate is the healthcare and pharmaceuticals. Greenville Hospital System and Bon Secours St. Francis Health System are the area's largest in the healthcare sector, while the pharmaceutical corporation of Bausch & Lomb have set up regional operations alongside smaller recently developed local companies like IRIX Manufacturing, Incorporated and Pharmaceutical Associates. The Upstate is also home to a large amount of private sector and university-based research including R&D facilities for Michelin, Fuji and General Electric and research centers to support the automotive, life sciences, plastics and photonics industries. Clemson University, BMW, IBM, Microsoft, and Michelin have combined their resources to create International Center for Automotive Research (ICAR), a research park that specializes in the development of automotive technology.

Corporations based in or with a major presence in the Upstate

• BMW's only North American manufacturing plant is located in Spartanburg County, with an investment of $3.7 billion. [4]

• Fuji Film located their first manufacturing facility in the U.S. in Greenwood County. [5]

• Michelin North America's headquarters is located in Greenville, along with seven manufacturing plants, R&D facility and test track located in the Upstate. Michelin employees more than 7,800 in South Carolina. [6]

• Walgreens has their southeastern distribution center located in Anderson County, which employs mentally handicapped workers as nearly 40% of their workforce. [7]

View of the Upcountry from I-26 in Spartanburg County

The Upstate region is served by 3 regional newspapers: The Greenville News, the (Spartanburg) Herald-Journal and the Anderson Independent-Mail, each of which serves their individual city and surrounding area respectively.

The Upstate is part of the vastly larger Greenville-Spartanburg-Anderson-Asheville designated market area, which extends into western North Carolina and northeastern Georgia. The following television stations serve the region: