Upton-upon-Severn (or Upton-on-Severn, locally simply Upton) is a small town and civil parish in the Malvern Hills District of Worcestershire, England. The 2011 census recorded a population of 2,881[1] making it the smallest town in the county.

Upton is situated on the west bank of the River Severn and is located 5 miles (8.0 km) southeast of Malvern. The town has a distinctive tower and copper-clad cupola – known locally as the "Pepperpot" – the only surviving remnant of a former church.[2]

Upton was founded in 897.[citation needed] Until the later half of the 20th century, the bridge at Upton was the only one across the River Severn between Worcester and Tewkesbury; the present bridge was built in 1940.[3] Oliver Cromwell's soldiers crossed the Severn here to win the battle of Upton before the main Battle of Worcester in the English Civil War.

The population of the civil parish in 2011 was recorded at 2,881[1] – an increase from 2,859 recorded in 2001.[4] The parish extends westward from the town, including the settlement at Tunnel Hill, but does not include the village of Ryall located close to the town, on the other side of the river. Upton is in the West Worcestershire parliamentary constituency.

Low lying areas of Upton suffered serious flooding in 2000. In the 2007 floods, levels exceeded those in 2000, and the town was inaccessible by road.[5] The town's main built up area lies on slightly higher ground than the surrounding countryside, and becomes an island during severe floods.

The town has three major music festivals, with the spring folk festival, and the summer jazz and blues festivals.[6]

Upton is the home of The White Lion Hotel, a 16th century coaching inn, where parts of the building date back to 1510. The building has undergone many transformations over the centuries and is easily found on the high street due to its distinctive portico, adorned with its very own lion. Reputed to have played a part in the English Civil War, where soldiers from both sides are alleged to have enjoyed the hospitality of this popular local hostelry prior to the Battle of Worcester. Guests of the hotel can stay in rooms referred to in books VII and VIII of Henry Fielding's classic 1749 novel "Tom Jones" in which he refers to the hotel as "A house of exceeding good repute";[7] these rooms retain many of their original features.

Upton on Severn Sports Field is the home of Upton on Severn Rugby Club, as well as being used for Welland Junior Swifts matches and other community functions. 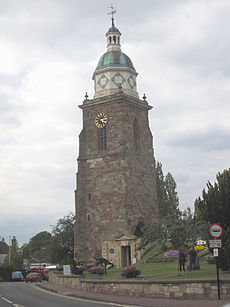 The 'Pepperpot' – remains of a former church 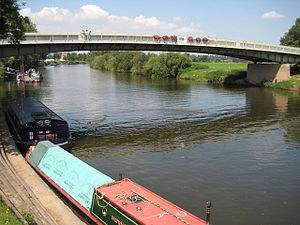 The bridge at Upton-upon-Severn

Upton used to have a railway station, on a branch line from Ashchurch to Malvern, with the intermediate stations Tewkesbury, Ripple, Worcestershire, Upton upon Severn and Malvern Wells (Hanley Road).[10] The Upton to Malvern section closed in December 1952 and the rest in August 1961, before the Beeching Axe.

Although the M5 motorway is close by, the nearest motorway junction is Junction 1 of the M50 (which is 2 miles from J8 of the M5).

Upton Marina is home to Mercia Inshore Search and Rescue.