Originally suggested in the 19th century, the hypothesis remained debated into the mid 20th century, often with disagreements exacerbated by pan-nationalist agendas.[1] Since the 1960s, the hypothesis has been widely rejected.[2][3][4][5] From the 1990s, interest in a relationship between the Altaic, Indo-European and Uralic families has been revived in the context of the Eurasiatic linguistic superfamily[6] hypothesis. Bomhard (2008) treats Uralic, Altaic and Indo-European as Eurasiatic daughter groups on equal footing.[7]

History of the hypothesis

The "Altaic" hypothesis, as mentioned by Finnish linguist and explorer Matthias Castrén[10][11] by 1844, included Finno-Ugric and Samoyedic, collectively known as "Chudic", and Turkic, Mongolic, and Tungusic, collectively known as "Tataric". Subsequently, Turkic, Mongolic, and Tungusic came to be referred to as Altaic languages, whereas Finno-Ugric and Samoyedic were called Uralic. The similarities between these two families led to their retention in a common grouping, named Ural–Altaic.

In Hungary the idea of the Ural–Altaic relationship remained widely implicitly accepted in the late 19th and the mid-20th century, though more out of pan-nationalist than linguistic reasons, and without much detailed research carried out. Elsewhere the notion had sooner fallen into discredit, with Ural–Altaic supporters elsewhere such as the Finnish Altaicist Martti Räsänen being in the minority.[12] The contradiction between Hungarian linguists' convictions and the lack of clear evidence eventually provided motivation for scholars such as Aurélien Sauvageot and Denis Sinor to carry out more detailed investigation of the hypothesis, which so far has failed to yield generally accepted results. Nicholas Poppe in his article The Uralo-Altaic Theory in the Light of the Soviet Linguistics (1940) also attempted to refute Castrén's views by showing that the common agglutinating features may have arisen independently.[13]

Beginning in the 1960s, the hypothesis came to be seen even more controversial, due to the Altaic family itself also falling out universal acceptance. Today, the hypothesis that Uralic and Altaic are related more closely to one another than to any other family has almost no adherents.[14] There are, however, a number of hypotheses that propose a macrofamily including Uralic, Altaic and other families. None of these hypotheses has widespread support.

In his Altaic Etymological Dictionary, co-authored with Anna V. Dybo and Oleg A. Mudrak, Sergei Starostin characterized the Ural–Altaic hypothesis as "an idea now completely discarded".[14] In Starostin's sketch of a "Borean" super-phylum, he puts Uralic and Altaic as daughters of an ancestral language of ca. 9,000 years ago from which the Dravidian languages and the Paleo-Siberian languages, including Eskimo-Aleut, are also descended. He posits that this ancestral language, together with Indo-European and Kartvelian, descends from a "Eurasiatic" protolanguage some 12,000 years ago, which in turn would be descended from a "Borean" protolanguage via Nostratic.[15]

Angela Marcantonio (2002) argues that the Finno-Permic and Ugric languages are no more closely related to each other than either is to Turkic, thereby positing a grouping very similar to Ural–Altaic or indeed to Castrén's original Altaic proposal.[16]

Linguist Martine Robbeets exemplify that "The Ural-Altaic theory was rather widely accepted in the 19th century, but after the affinity of the Uralic languages was established, the Ural-Altaic theory lost many of its supporters. Although it is commonplace in contemporary linguistic literature to reject the Ural-Altaic theory as such, the debate on possible genetic links between well established families is more animated than ever before. It is in this light that attempts to establish Nostratic or Eurasianic can be seen."[17]

According to the linguist Juha Janhunen typological parallels among Uralic and Altaic languages are accompanied by areal adjacency, calling it "a distinct Ural-Altaic language area and language type" belonging to a "single trans-Eurasian belt of agglutinative languages" in which Turkic, Mongolic, Tungusic, Korean, and Japanese are included.[18]

There is general agreement on several typological similarities being widely found among the languages considered under Ural–Altaic:[19]

Such similarities do not constitute sufficient evidence of genetic relationship all on their own, as other explanations are possible. Juha Janhunen has argued that although Ural–Altaic is to be rejected as a genealogical relationship, it remains a viable concept as a well-defined language area, which in his view has formed through the historical interaction and convergence of four core language families (Uralic, Turkic, Mongolic and Tungusic), and their influence on the more marginal Korean and Japonic.[20]

Contrasting views on the typological situation have been presented by other researchers. Michael Fortescue has connected Uralic instead as a part of an Uralo-Siberian typological area (comprising Uralic, Yukaghir, Chukotko-Kamchatkan and Eskimo-Aleut), contrasting with a more narrowly defined Altaic typological area;[21] while Anderson has outlined a specifically Siberian language area, including within Uralic only the Ob-Ugric and Samoyedic groups; within Altaic most of the Tungusic family as well as Siberian Turkic and Buryat (Mongolic); as well as Yukaghir, Chukotko-Kamchatkan, Eskimo-Aleut, Nivkh, and Yeniseian.[22]

Relationship between Uralic and Altaic

Two senses should be distinguished in which Uralic and Altaic might be related.

In other words, showing a genetic relationship does not suffice to establish a language family, such as the proposed Ural–Altaic family; it is also necessary to consider whether other languages from outside the proposed family might not be at least as closely related to the languages in that family as the latter are to each other. This distinction is often overlooked but is fundamental to the genetic classification of languages.[23] Some linguists indeed maintain that Uralic and Altaic are related through a larger family, such as Eurasiatic or Nostratic, within which Uralic and Altaic are no more closely related to each other than either is to any other member of the proposed family, for instance than Uralic or Altaic is to Indo-European (for example Greenberg).[24]

Evidence for a genetic relationship

Some[who?] linguists point out strong similarities in the personal pronouns of Uralic and Altaic languages. Because pronouns are among the elements of language most resistant to change and it is very rare for one language to replace its pronouns wholesale with those of another, these similarities, if accepted as non-accidental, would be strong evidence for genetic relationship. It should be noted that the "s" in the Finnic second person pronoun *sinä is a result of a ti > si sound law [25] in Proto-Finnic, and comes from earlier form *tinä, as in the plural form te and the Hungarian pronoun te. 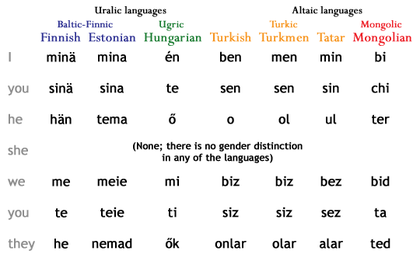 To demonstrate the existence of a language family, it is necessary to find cognate words that trace back to a common proto-language. Shared vocabulary alone does not show a relationship, as it may be loaned from one language to another or through the language of a third party.

There are shared words between, for example, Turkic and Ugric languages, or Tungusic and Samoyedic languages, which are explainable by borrowing. However, it has been difficult to find Ural–Altaic words shared across all involved language families. Such words should be found in all branches of the Uralic and Altaic trees and should follow regular sound changes from the proto-language to known modern languages, and regular sound changes from Proto-Ural–Altaic to give Proto-Uralic and Proto-Altaic words should be found to demonstrate the existence of a Ural–Altaic vocabulary. Instead, candidates for Ural–Altaic cognate sets can typically be supported by only one of the Altaic subfamilies.[26] In contrast, about 200 Proto-Uralic word roots are known and universally accepted, and for the proto-languages of the Altaic subfamilies and the larger main groups of Uralic, on the order of 1000–2000 words can be recovered.

The basic numerals, unlike among the Indo-European languages (compare Proto-Indo-European numerals), are particularly divergent between all three core Altaic families and Uralic, and to a lesser extent even within Uralic.[27]