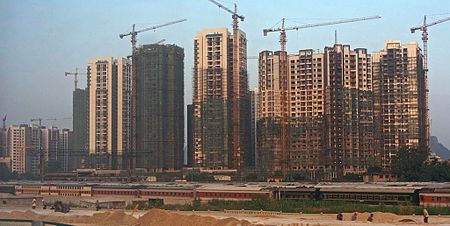 Urbanization in the People's Republic of China increased in speed following the initiation of the reform and opening policy. By the end of 2014, 54.7% of the total population lived in urban areas, a rate that rose from 26% in 1990.[1]

China's increase in urbanization was one of the several functions of the surpluses produced from the agricultural sectors in China (farming and pastoral dependency). This judgment is based on (1) the fact that not until the end of the Qing Period did China begin importing moderate quantities of foodstuffs from the outside world to help feed its population; and (2) the fact that the handicraft sector never challenged agricultural dominance in the economy despite a symbiotic relationship between them.

By the same token, urbanization rarely exceeded ten percent of the total population although large urban centers were established. For example, during the Song, the northern capital Kaifeng (of the Northern Song) and southern capital Hangzhou (of the Southern Song) had 1.4 million and one million inhabitants, respectively.[2] In addition, it was common that urban residents also had one foot in the rural sector due to private landholding property rights.

Urban population grew steadily at around 3%-4% from 1950 to 1965. Urban population experienced a 'great jump' in 1958-1961 during the "Great Leap Forward" in conjunction with the massive industrialization effort. During the Cultural Revolution years of 1965-1975, urban population growth dropped as a result of 'rustication'. From 1962 to 1978, it is estimated that almost 18 million urban youth moved to the countryside.[3]

The majority of China's people live in the eastern segment of the country, the traditional China proper. Most are peasants living, as did their forebears, in the low-lying hills and central plains that stretch from the highlands eastward and southward to the sea. Agriculture predominates in this vast area, generally favored by a temperate or subtropical climate. The meticulously tilled fields are evidence in part of the government's continuing concern over farm output and the food supply.

Although migration to urban areas has been restricted since the late 1950s, as of the end of 1985 about 33 percent of the population was urban. An urban and industrial corridor formed a broad arc stretching from Harbin in the northeast through the Beijing area and south to China's largest city, the industrial metropolitan complex of Shanghai.

The uneven pattern of internal development and settlement, so strongly weighted toward the eastern part of the country, doubtless will change relatively little even with developing interest in exploiting the mineral-rich and agriculturally productive portions of the vast northwest and southwest regions. The adverse terrain and climate of most of those regions have historically discouraged dense population.

In 1987 China had a total of twenty-nine provincial-level administrative units directly under the central government in Beijing. In addition to the twenty-one provinces (sheng), there were five autonomous regions (zizhiqu) for minority nationalities, and three special municipalities (shi)--the three largest cities, Shanghai, Beijing, and Tianjin. (The establishment of Hainan Island as a provincial-level unit separate from Guangdong Province was scheduled in 1988.) A 1979 change in provincial-level administrative boundaries in the northeast region restored Inner Mongolia Autonomous Region to its original size (it had been reduced by a third in 1969) at the expense of Heilongjiang, Jilin, and Liaoning provinces. Urban areas were further subdivided into lower-level administrative units beginning with municipalities and extending down to the neighborhood level.

The pace of urbanization in China from 1949 to 1982 was relatively slow because of both rapid growth of the rural population and tight restrictions on rural-urban migration for most of that period. According to the 1953 and 1982 censuses, the urban population as a percentage of total population increased from 13.3 to 20.6 percent during that period. From 1982 to 1986, however, the urban population increased dramatically to 37 percent of the total population. This large jump resulted from a combination of factors. One was the migration of large numbers of surplus agricultural workers, displaced by the agricultural responsibility system, from rural to urban areas. Another was a 1984 decision to broaden the criteria for classifying an area as a city or town. During 1984, the number of towns meeting the new urban criteria increased more than twofold, and the urban town population doubled. In the mid-1980s, demographers expected the proportion of the population living in cities and towns to be around 50 percent by the start of the 21st century. This urban growth was expected to result primarily from the increase in the number of small- and medium-sized cities and towns rather than from an expansion of existing large cities.

China's statistics regarding urban population sometimes can be misleading because of the various criteria used to calculate urban population. In the 1953 census, urban essentially referred to settlements with populations of more than 2,500, in which more than 50 percent of the labor force were involved in nonagricultural pursuits. The 1964 census raised the cut-off to 3,000 and the requirement for nonagricultural labor to 70 percent. The 1982 census used the 3,000/70 percent minimum but introduced criteria of 2,500 to 3,000 and 85 percent as well. Also, in calculating urban population, the 1982 census made a radical change by including the agricultural population residing within the city boundaries. This explains the dramatic jump in urban population from the 138.7 million reported for year-end 1981 to the 206.6 million counted by the 1982 census. In 1984 the urban guidelines were further loosened, allowing for lower minimum population totals and nonagricultural percentages. The criteria varied among provincial-level units.

Although country urban population—382 million, or 37 percent of the total population in the mid-1980s—was relatively low by comparison with developed nations, the number of people living in urban areas in China was greater than the total population of any country in the world except India. The four Chinese cities with the largest populations in 1985 were Shanghai, with 7 million; Beijing, with 5.9 million; Tianjin, with 5.4 million; and Shenyang, with 4.2 million. The disproportionate distribution of population in large cities occurred as a result of the government's emphasis after 1949 on the development of large cities over smaller urban areas. In 1985 the 22 most populous cities in China had a total population of 47.5 million, or about 12 percent of China's total urban population. The number of cities with populations of at least 100,000 increased from 200 in 1976 to 342 in 1986.

In 1987, China was committed to a three-part strategy to control urban growth: strictly limiting the size of big cities (those of 500,000 or more people); developing medium-sized cities (200,000 to 500,000); and encouraging the growth of small cities (100,000 to 200,000). The government also encouraged the development of small market and commune centers that were not then officially designated as urban places, hoping that they eventually would be transformed into towns and small cities. For more on this understudied dimension of China's urbanisation see the special issue of China Perspectives (September 2013) edited by Ben Hillman and Jon Unger of the Australian National University. The big and medium-sized cities were viewed as centers of heavy and light industry, and small cities and towns were looked on as possible locations for handicraft and workshop activities, using labor provided mainly from rural overflow. The urbanization of small and medium-sized towns has created different challenges for ethnically diverse areas, leading in some cases to an ethnic stratification of labor and greater potential for ethnic conflict.[4]

From 2010 to 2025, it is estimated by the Ministry of Housing and Urban-Rural Development that 300 million Chinese now living in rural areas will move into cities. The fast pace of urbanization will create at least 1 trillion yuan in annual investment opportunities in building water supply, waste treatment, heating and other public utilities in the cities.[5] The Chinese government is also demolishing rural villages and building new cities and towns to relocate villagers to. It ultimately aims to integrate about 70% of China's population, about 900 million people, into cities by 2025.[6]

According to Professor Lu Dadao, president of the Geographical Society of China (GSC), China's urbanization took 22 years to increase to 39.1% from 17.9%. It took Britain 120 years, the US, 80 years, and Japan more than 30 years to accomplish this.[citation needed]

As shown in the table (right), China's urban population growth is higher than that of Asia as well as the world.

China's urbanization rate in 2005 was higher than that of Asia and roughly on par with the levels in East and South-East Asia. However, the country still has a long way to go in catching up with the western developed countries.