From Infogalactic: the planetary knowledge core
Jump to: navigation, search
For other uses, see Urien (disambiguation). 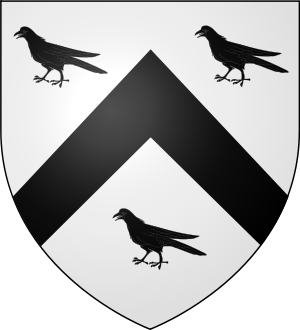 Arms attributed to Urien in the Middle Ages featuring the raven

Urien /ˈjʊəriɛn/, often referred to as Urien Rheged or Uriens, was a late 6th-century king of Rheged, an early British kingdom of the Hen Ogledd (northern England and southern Scotland). His power and his victories, including the battles of Gwen Ystrad and Alt Clut Ford, are celebrated in the praise poems to him by Taliesin, preserved in the Book of Taliesin. He became the "King Urien of Gorre"[1] of later Arthurian legend and his son Owain mab Urien was later known as Ywain.

According to the genealogies, Urien was the son of Cynfarch Oer, son of Meirchion Gul, son of Gorwst, son of Cenau, son of Coel Hen (King Cole), the first recorded post-Roman military leader in the area of Hadrian's Wall. He fought against the rulers of the Anglian kingdom of Bernicia (modern Northumbria). An Anglian noble, Ida, had occupied Metcauld around the middle of the 6th century and begun to raid the mainland. Urien joined with other northern kings, Rhydderch Hael "the Generous" of Strathclyde and two other descendants of Coel, Gwallog mab Llaenog and Morgant Bwlch. They defeated the Angles and besieged them on Lindisfarne but, according to the Historia Brittonum, Urien was assassinated at the behest of Morgant Bwlch, who was jealous of his power. A man called Llofan Llaf Difo is said to have killed him. One of the Welsh Triads calls the death of Urien one of the "Three Unfortunate Assassinations" and another lists him as one of the "Three Great Battle-leaders of Britain".

He had four sons, named Owain, Rhiwallon, Rhun and Pasgen. The eldest of them succeeded him.

Urien remained a popular figure in Wales over the centuries, and he and his son Owain were incorporated into Arthurian legend as it spread from Britain to continental Europe. His kingdom was eventually transferred to the mythical land of Gore, and Kings Lot of Lothian and Auguselus of Scotland are sometimes said to be his brothers. During the reign of Uther Pendragon he marries Arthur's sister (often Morgan le Fay, but sometimes another sister is named). He, like the kings of several other lands, initially opposes Arthur's accession to the throne after Uther's death. Urien and the others rebel against the young monarch, but upon their defeat, the rebels become Arthur's allies and vassals.

In the legends his marriage to Morgan is not portrayed as a happy one, however, as in one story Morgan plots to take Excalibur, kill Urien and Arthur, and place herself and her lover Accolon on the throne. He is always said to be the father of Ywain (Owain), and many texts give him a second son, Ywain the Bastard, fathered on his seneschal's wife. Welsh tradition attributes to him a daughter named Morfydd. Thomas Malory sometimes spells his name Urience, which has led some (e.g. Alfred Tennyson) to identify him with King Rience.

Urien is mentioned in the 20th century Welsh awdl Yr Arwr by Hedd Wyn. He is also one of the key characters in Melvyn Bragg's novel Credo (1996), a celebration of the Celtic tradition and its fight against the Northumbrian and Roman (Catholic) incursions. He appears as "Uryens" in John Boorman's film Excalibur, depicted as an enemy lord who becomes Arthur's ally and is the one to knight him.