listen)) is a municipality and a town in the Flevoland province in the central Netherlands.

Urk is first mentioned in historical records dating to the 10th century, when it was still an island in the Almere, a lake that would become part of the Zuiderzee in the 13th century after a series of incursions by the North Sea. In 1939, a dike from the mainland to Urk ended the town's island status, just as the Afsluitdijk project was changing the salt water Zuiderzee surrounding Urk to the less saline IJsselmeer. Later in the 20th century, seabed areas surrounding Urk were reclaimed from the sea and became the Noordoostpolder.

The mainstay of the town's economy has always been fishing, and the products of the sea coming in through Urk's harbour continue to be exported widely, although today Urk's fishing boats must travel greater distances to gather them than was required in most historical periods. Religious life has also traditionally been very important to Urk's inhabitants, with active, conservative congregations of the Dutch Reformed denominations playing key roles in the life of the community.

Around the IJsselmeer is an arc of boulder clay high areas of land, which formed during the Ice Age glaciations of the Pleistocene epoch: Texel, Wieringen, Urk, de Voorst, and Gaasterland. To south of that arc, as a result of meltwater, a lake formed, which became known as Almere. North of the boulder clay highland of Urk, the Vecht river flowed into the Almere, while the river IJssel with tributaries flowed into the south of Urk. As the climate became warmer during the Middle Ages, the sea level rose; and since the Ice Age ended the Netherlands and around have been slowly steadily sinking because of forebulge effect. During the 13th century (and especially after a large storm in 1282) the Zuiderzee formed, and the water round Urk suddenly became tidal sea. Because there was no sea defence, in the course of time large pieces of the island were eroded away. The southwest side of Urk, which rose perpendicularly out of the sea, was called het Hoge Klif ("the High Cliff"). Around 1700 the municipality of Amsterdam gave sea defences to Urk.

Dutch topographic map of the municipality of Urk, June 2015

After WWII, Urk's town spread into the polder. Many Urkers who had to leave the town because of overcrowding before the polder reclamation was completed were able to return to Urk.

The Noordoostpolder in its early years had an alternative name "Urker Land," from which Urk's newspaper, Het Urkerland, gets its name. 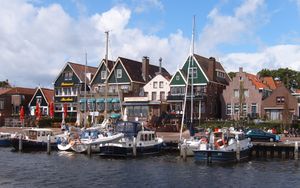 The quay of Urk

The important economic pillar of the village is the fishery. After the IJsselmeer was formed, the Urkers fished on the North Sea. Due to rising prices of fish, at present Urk is a very prosperous village. In the past, many lives were lost in storms on the Zuiderzee and North Sea. There is a memorial to lost fishermen on Urk, popularly known as the "Urker vrouw": a statue of a woman looking out to sea, vainly awaiting the return of her husband and sons.

Two other parties also ran, but both (VVD and local Beter Voor Urk) did not register sufficient votes for a seat.

A majority coalition of ChristenUnie, SGP and Hart voor Urk are currently in power. The town council is led by (non-elected) mayor Pieter van Maaren.

None of these parties can be described as either left-wing (socialist) or liberal. National parties such as the VVD (conservative/liberal), D66 (liberal), GroenLinks (green party) and PvdA (labour) are not represented in Urk's town council and support for these parties in national and regional elections remains minimal. However, due to slowly growing support for the VVD, an Urk affiliate of the conservative/liberal party was founded in early 2011 and entered the 2014 local elections. However, the VVD only drew 2.7% of the vote, insufficient for a seat.

Urk is one of the most politically conservative areas in the Netherlands. As part of the so-called Dutch 'Bible belt', a vast majority of election votes go to the three Christian parties in the Netherlands, SGP, ChristenUnie and CDA. Urk is also known for its high turnout at each election, which is usually considerably higher than the national average (although general turnout percentages have dropped approx. 10% since 2002).

However, in recent years a few changes in voting patterns occurred, such as a growing support for national protest parties such as the LPF or Geert Wilders'PVV Freedom Party. Also, voting patterns these days tend to show bigger swings, as shown in 2010's and 2012's national elections in which CDA lost 11% and 13% respectively, and in 2011's regional elections, in which ChristenUnie lost 18%. In 2012, orthodox-Christian SGP even registered an absolute majority with 51.2% of the vote. (In the European Elections of 2014, the combined ChristenUnie/SGP list even registered 78% of the vote).

Support for established left wing parties, such as the Labour Party or the Socialist Party, remains minimal.

One of the oldest and most distinctive dialects of Dutch is the language spoken in Urk. Nearly everyone in the village speaks this dialect and uses it in daily life. The dialect deviates considerably from contemporary standard Dutch and has preserved many old characteristics that disappeared from standard Dutch a long time ago. The Urkish dialect also includes elements that are older than standard Dutch and were never part of the standard language. For example, the old word for "father" in the Urkish dialect is taote. The dialect developed this way because until WWII, Urk was an island and could only be reached by boat. Radio was unknown, and the poor population didn't have much money for newspapers and books. Until the modern era, primary education for the children typically lasted only two years; afterwards, children had to help maintain the family and formal schooling ended[citation needed].

Recent linguistic classifications have assigned the Urk dialect to the "Urkers dialect family", of which it is the only member.[5]

Because living conditions in Urk in historical times were very poor, young girls (typically about age 11 or 12) would frequently leave the island to become domestic servants, mostly in or around Amsterdam. They often served with Jewish families. After a few years, they would return to Urk to form families of their own. As a result of this practice, the Urkish dialect absorbed some loanwords from the Amsterdam dialect and also from Yiddish. For instance, the Yiddish "Shnur" for "sister-in-law" became the Urkish "Snoar" (identical meaning); the Hebrew "Kallah" ("כלה") for "bride" became the Urkish "Kalletjen", meaning "girlfriend" (literally "little bride").

When Napoleon occupied the Netherlands, many French words were incorporated into both standard Dutch and Urkish. Just as for standard Dutch, French words often changed form when incorporated into Urkish. The Urkish dialect has always been primarily a spoken language, and there are not many old texts written in the dialect. Only in recent years have people begun to write prose and poetry in the Urkish dialect. There are Urkers who have translated Bible books into Urkish, such as the book of Psalms.

Currently, Urk is no longer an island, and exposure to the standard Dutch through the media is widespread. However, the distinctive Urkish dialect is still alive.

A famous Urkish folktale is the story parents tell their children when they want to know where the babies come from. The tale involves a large exposed rock which can be seen in the IJsselmeer about 30 metres from the shore. This stone is known as the "Ommelebommelestien".

Urkers often tell their children that there are two kinds of people-- vreemden (strangers) and Urkers (people from Urk). Strangers are usually born from a cabbage, or a stork brings them to their new parents, but Urkers come from a large stone which lies about 30 meters from the shores of their former island. Nowadays, the stone is usually called "Ommelebommelestien" (Ommel-Bommel Stone), but in former times it was called "Ommelmoerstien": moer means "mother's" in the Urkish dialect.

In the tale, a stork comes all the way from Egypt to put babies in the stone. When the baby is about to be born, the baby's father is said to have to go to Schokland to pick up the key that gives access to the stone. So when an Urkish man is asked if he has been to Schokland, he is actually being asked if he has children.

In the older days, when both Urk and Schokland were still islands in the Zuiderzee, the father had to take the obstetrician in his boat and row from Urk to Schokland to get the key, and then from Schokland to the Ommelebommelestien to get the baby. Nowadays he would be able to go to Schokland by car, but according to the legend he still has to row. The door to the stone is somewhere below sea level, so it is difficult to find.

Once the door was found, a small price had to be paid for the baby: traditionally one Dutch guilder for a girl but two for a boy.

The mother was said to be kept in bed with a nail through her right foot. There she would celebrate that she had just become a mother.

Urk and the arts

Writer Jef Last lived on Urk for several years from 1932 onwards. He wrote several articles about Urk for a Dutch magazine called 'De Groene Amsterdammer'. While living here, he fell in love with a fisherman, and was inspired to write Zuiderzee. This novel deals with the love between two fishermen living on Urk and was one of the first, if not the first novel in Dutch literature to openly deal with homosexuality.

The Dutch writer, painter and resistance hero Willem Arondeus spent some time in Urk from 1920. While residing on Urk, during 1922, he wrote 'Afzijdige Strofen', a collection of twenty homo-erotic poems which were posthumously published in 2001.

Urk has no railway station but the nearest stations are Kampen and Lelystad, each approximately 30 kilometres away. This makes Urk one of the most isolated places in the Netherlands as far as railway connections are concerned.