Urraca of León and Castile

Urraca (April 1079 – 8 March 1126) was Queen of León, Castile, and Galicia, and claimed the imperial title as suo jure Empress of All the Spains[1] from 1109 until her death in childbirth, as well as Empress of All Galicia.[2]

Born in Burgos, Urraca was the eldest and only surviving child of Alfonso VI of León with his second wife Constance of Burgundy; for this, she was heiress presumptive of the Kingdoms of Castile and León until 1107, when her father recognized his illegitimate son Sancho as his heir.

Urraca’s place in the line of succession made her the focus of dynastic politics, and she became a child bride at age eight (1087) to Raymond of Burgundy, a mercenary adventurer.[3] Author Bernard F. Reilly suggests that, rather than a betrothal, the eight-year-old Urraca was fully wedded to Raymond of Burgundy, as he almost immediately appears in protocol documents as Alfonso VI's son-in-law, a distinction that would not have been made without the marriage. Reilly doubts that the marriage was consummated until Urraca was 13, as she was placed under the protective guardianship of a trusted magnate. Her pregnancy and stillbirth at age 14 suggest that the marriage was indeed consummated when she was 13 or 14 years old.

Urraca's marriage to Raymond was part of Alfonso VI's diplomatic strategy to attract cross-Pyrenees alliances, and she gave birth two children: a daughter, Sancha Raimúndez (born before 11 November 1095 and after 1102) and a son, Alfonso Raimúndez, who would become Alfonso VII (born 1 March 1105). However, Raymond died in 1107, leaving Urraca a widow with two small children.

Urraca became again an heiress presumptive after the death of her brother Sancho at the at the Battle of Uclés in 1108. Alfonso VI reunited the nobles of the Kingdom in Toledo and announced that his widowed daughter was the chosen one to succeeded him.

The nobles agreed with the royal designation but demanded that Urraca should marry again. Several candidates for the hand of the heiress to the thrones of León and Castile appeared immediately, including counts Gómez González and Pedro González de Lara. Alfonso VI feared that the rivalries between castilian and leonese nobles would be increased if she married any of these suitors and decided that his daughter should wed Alfonso I of Aragon, known as the Battler, opening the opportunity for uniting León-Castile with Aragon.

File:Urracasign.jpg
Signature of Urraca from 1097 charter.

Marriage negotiations were still underway when Alfonso VI died on 29 June/1 July 1109 and Urraca became queen. Many of Alfonso VI’s advisers and leading magnates in the kingdom formed a “quiet opposition” to the marriage of the Queen to the King of Aragon. According to Bernard F. Reilly, these magnates feared the influence the King of Aragon might attempt to wield over Urraca and over Leonese politics.

Urraca protested against the marriage but honoured her late father’s wishes (and the Royal Council's advice) and continued with the marriage negotiations, though she and her father’s closest advisers were growing weary of Alfonso I's demands. Despite the advisers' initial opposition, the prospect of Count Henry of Portugal filling any power vacuum led them to go ahead with the marriage which took place in early October 1109 at the Castle of Monzón de Campos, with the major of the fortress, Pedro Ansúrez, acting as godfather of the wedding. As events would unfold, these advisers underestimated Urraca's political prowess, and later advised her to end the marriage. 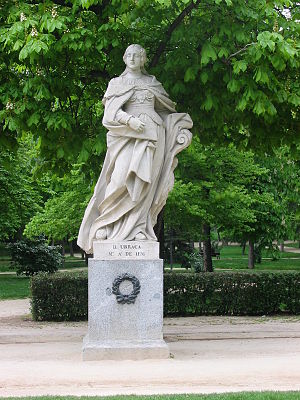 The marriage of Urraca and Alfonso I almost immediately sparked rebellions in Galicia[4] and scheming by her illegitimate half-sister Theresa and brother-in-law Henry, the Countess and Count of Portugal. Also, they believed that the new marriage of Urraca could put in jeopardy the rights of the son of her first marriage, Alfonso Raimúndez. In fact, one of the first acts of the new spouses was to sign a pact under which both monarchs granted to each other soberana potestas over each other's Kingdom, declaring heir of both their future children, and in the case that the union was childless, the surviving spouse would succeeded the other one in the throne. From the start, the Galician faction was divided in two tendencies: one headed by Diego Gelmírez, Archbishop of Santiago de Compostela (who defended the position of Alfonso Raimúndez as Urraca's successor) and another led by Count Pedro Fróilaz de Traba, tutor of the young prince (who was inclined to the complete independence of Galicia under the rule of Alfonso).

A third group of opposition to the royal marriage was at the court and was headed by Count Gómez González, whose motivation against Urraca and Alfonso I of Aragon could have been his fear of losing power, a sensation soon confirmed when Alfonso I appointed Aragonese and Navarrese nobles for important public posts and as holders of fortresses.

From Galicia, the count of Traba began the first aggressive movement against the monarchs reclaiming the hereditary rights of Alfonso Raimúndez. In response to the Galician rebellion, Alfonso I of Aragon marched with his army to Galicia and in 1110, reestablished the order there after defeating the local troops in Monterroso Castle.

The Galician rebellion against the royal power was only the beginning of a series of political and military conflicts which, with the complete opposite personalaities of Urraca and Alfonso I and their mutual dislike, gave rise to a continuous civil war in the Hispanic kingdoms over the following years.

As their relationship soured, Urraca accused Alfonso of physical abuse, and by May 1110 she separated from Alfonso. In addition to her objections to Alfonso's handling of rebels, the couple had a falling-out over his execution of one of the rebels who had surrendered to the queen, to whom the queen was inclined to be merciful. Additionally, as Urraca was married to someone many in the kingdom objected to, the queen's son and heir became a rallying point for opponents to the marriage.

Estrangement between husband and wife escalated from discrete and simmering hostilities into open armed warfare between the Leonese-Castilians and the Aragonese. An alliance between Alfonso of Aragon and Henry of Portugal culminated in the 1111 Battle of Candespina in which Urraca's lover and chief supporter Gómez González was killed. He was soon replaced in both roles by another count, Pedro González de Lara, who took up the fight and would father two of Urraca's children. By the fall of 1112 a truce was brokered between Urraca and Alfonso with their marriage annulled. Though Urraca recovered Asturias, Leon, and Galicia, Alfonso occupied a significant portion of Castile (where Urraca enjoyed large support), while her half-sister Theresa and her husband Count Henry of Portugal occupied Zamora and Extremadura. Recovering these regions and expanding into Muslim lands would occupy much of Urraca's foreign policy.

According to author Bernard F. Reilly, the measure of success for Urraca’s rule was her ability to restore and protect the integrity of her inheritance – that is, the kingdom of her father – and transmit that inheritance in full to her own heir. Policies and events pursued by Alfonso VI – namely legitimizing her brother and thereby providing an opportunity for her illegitimate half-sister to claim a portion of the patrimony, as well as the forced marriage with Alfonso I of Aragon – contributed in large part to the challenges Urraca faced upon her succession. Additionally, the circumstance of Urraca’s gender added a distinctive role-reversal dimension to diplomacy and politics, which Urraca used to her advantage.

Urraca is characterized in the Historia Compostelana as prudent, modest, and with good sense. According to Reilly, the Historia Compostelana also attributes her "failings" to her gender, "the weakness and changeability of women, feminine perversity, and calls her a Jezebel" for her liaisons with her leading magnates, with at least one relationship producing an illegitimate son. These observations were hardly neutral or dispassionate, according to Reilly, who wrote: "[T]here is no question that the queen is in control, perhaps all too much in control, of events." Urraca's use of sex in politics should be viewed more as a strategy that provided the queen with allies but without any masters.

As queen, Urraca rose to the challenges presented to her and her solutions were pragmatic ones, according to Reilly, and laid the foundation for the reign of her son Alfonso VII, who in spite of the opposition of Urraca's lover Pedro González de Lara succeeded to the throne of a kingdom whole and at peace at Urraca’s death in 1126.