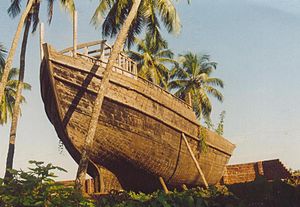 Uru is a boat with an ancient design 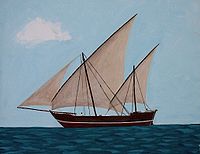 This boom had been originally built in Beypore, Kerala, India

The Uru, or "Fat Boat", is a generic name for large Dhow-type wooden ships made by vishwabrahmins in Beypore, a village south of Kozhikode, Kerala, in the southwestern coast of India.

This type of boat has been used by the Arabs since ancient times as trading vessels, and even now, urus are being manufactured and exported to Arab nations from Beypore. These boats used to be built of several types of wood, the main one being teak. The teak was taken from Nilambur forests in earlier times, but now imported Malaysian teak is used. A couple of boat-building yards can still be found near the Beypore port.[1]