From Infogalactic: the planetary knowledge core
Jump to: navigation, search
This article is about the island. For the town, see Usedom (town). For the abbey, see Usedom Abbey.

Usedom (German: Usedom [ˈuːzədɔm], Polish: Uznam [ˈuznam]) is a Baltic Sea island in Pomerania, since 1945 split between Germany and Poland. It is the second biggest Pomeranian island after Rugia and before neighbouring Wolin.

It is situated north of the Stettin Lagoon (Polish: Zalew Szczeciński; German: Stettiner Haff) estuary of the River Oder. About 80% of the island belongs to the German district of Vorpommern-Greifswald in the state of Mecklenburg-Vorpommern. The eastern part and the largest city on the island, Świnoujście (German name: Swinemünde), are part of the Polish West Pomeranian Voivodeship. The island's total area is 445 km² (the German part 373 km²; the Polish part 72 km²). Its population is 76,500 (the German part 31,500; the Polish part 45,000).

With an annual average of 1906 sunshine hours, Usedom is the sunniest region of both Germany and Poland, and it is also the sunniest island in the Baltic Sea.[1] Hence its nickname Sunny Island (German: Sonneninsel, Polish: Wyspa Słońca[2]).

The island is a very popular tourist destination since the Gründerzeit in the 19th century, and features unique heritage of this era, like its many noble mansions in resort architecture. Notable seaside resorts include Zinnowitz and the Amber Spas in the west, the Kaiserbad and Świnoujście in the east. 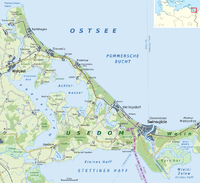 The island is separated to the east from the neighbouring island of Wolin by the Świna (German: Swine) strait (or river), which is the main route connecting Szczecin Bay with the Pomeranian Bay, a part of the Baltic Sea. The strait between the island and the mainland is called the Peenestrom; it is a downstream extension of the valley of the Peene river, which flows into the westernmost part of the Stettin Lagoon. The island is mostly flat, partly covered by marshes.

The largest town on the island is Świnoujście (Swinemünde), which has a population of 41,500. Another town, Usedom, gives its name to the island. The largest town in the German part is Heringsdorf (from 2005 to 2006 called Dreikaiserbäder, literally "Three Emperor Spas").

There are many popular seaside resorts on the Baltic Sea coast, including Zinnowitz and the Amber Spas in the west – and the three Imperial Spas Ahlbeck, Heringsdorf, and Bansin forming a town, as well as neighbouring Świnoujście in the east of Usedom.

The hinterland is called Achterland, referring to the Achterwasser lagoon (Rear Waters). It is characterized by unspoilt forests, lagoon landscapes, and hills, as well as calm villages such as Loddin and Balmer See with its golf course.

Settled since the Stone Age, the area was probably inhabited by Germanic Rugians, before the Polabian Slavs moved in during the fifth, sixth, and seventh centuries. Around the island, Wendish/Scandinavian trade centres such as Vineta/Jomsborg and Menzlin were established. In 1128 the Slavic Pomeranian Duke Wartislaw I was converted to Christianity through the efforts of Otto of Bamberg. In 1155 the Premonstratensians established a monastery in Grobe, generally known as Usedom Abbey, which in 1309 was moved to the village of Pudagla. In the meantime, a Cistercian nunnery was founded in Krummin and soon almost the whole island was in the possession of one or the other of the ecclesiastical orders. During the Reformation, ownership passed to the Slavic dukes of Pomerania, who took over the island.

During the Thirty Years' War, on June 26, 1630, the Swedish Army under King Gustavus Adolphus landed in the village of Peenemünde, located on the Peenestrom strait. Usedom was annexed by Sweden after the war for almost a century, until in 1720 it was sold for 2 million thalers to Prussian King Frederick William I. In 1740 Frederick the Great of Prussia developed a seaport in Swinemünde.

In 1945 the eastern part of the island, together with the city and port of Swinemünde (now Świnoujście), was assigned to Poland under border changes promulgated at the Potsdam Conference, and the surviving German inhabitants of the town were expelled to the west. The territory was repopulated with Poles, many of whom had been expelled from what had been eastern Poland by the Soviets.

The Isle of Usedom is one of Germany's major holiday and recreation areas due to its beaches, its natural beauty, and a number of elegant seaside towns such as Zinnowitz and Heringsdorf, which have been frequented by the German and international nobility as well as the general public. St. Peter Church in Benz is featured in the works of many artists, notably Lyonel Feininger. Many hotels and bed and breakfast establishments are available on both sides of the German-Polish border. In addition to the coastline, the hinterland features nature reserves, castles, lakes and historic villages. Points of interest include: